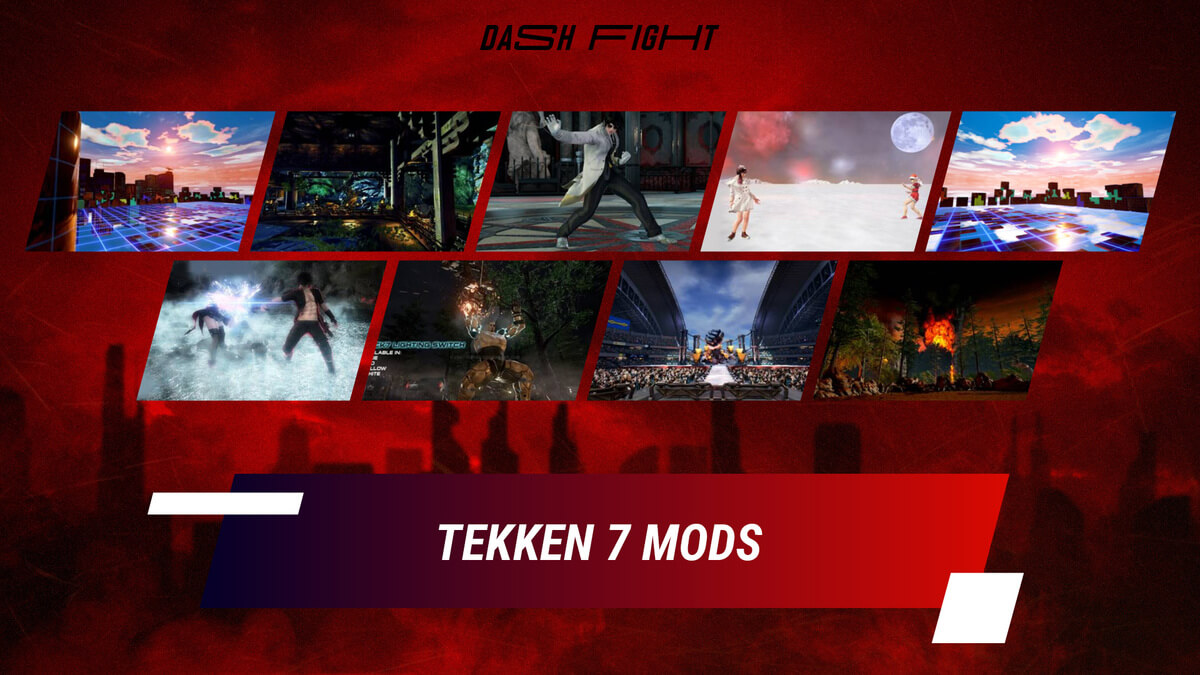 #Guide#Evergreen
Do you need more hilarious costumes? Tekken mods are here to help?

It seems like almost nothing can stop the creative power of gamers. Even if Tekken 7 offers an amazon customization section, we can’t stop ourselves from looking for even more options. Creators from the fighting games community have released a huge variety of Tekken 7 mods that bring tons of visual and audio changes. On the other side, players willingly use various mods for Tekken, so good creations are always in demand.

In this article on DashFight, we would like to highlight some aspects of using Tekken 7 PC mods and recommend to our readers the 7 very good among them (in our humble opinion).

Previously we made a similar post on mods in Street Fighter V (and we chose five mods there, supporting the magic of numbers).

What are mods in Tekken 7?

They are modifications that change some aspects of the game. In fact, a mod is an additional code, which developers allow to connect to their product.

There are various types of mods:

There also are some (very bad) mods that give players unfair advantages. Yes, it’s true - theoretically, players can use cheating mods in their games. Such modifications are just awful! They ruin experience for everyone involved, including even those who use them (you always know those victories are fake, and you never can really enjoy the game). Such mods are known in shooters. Thank goodness, fighting games are well protected from such modifications.

To this bad category, we can include Tekken 7 rank mods that mess with your rank. It is much better to improve your skills and get high Tekken 7 ranks when you really deserve this.

Many mods are unavailable for multiplayer via the Internet - they are installed only on one computer. You may need Tekken 7 mods online for such modified matches. But most mods work offline or in our custom games.

By the way, don’t confuse mods (modifications) with modes - they only sound similar but these are totally different things. On DashFight, we have an article about Tekken 7 modes, so check it out.

Tekken 7: how to install mods?

Modifications are available only for PC players. Someone would say it’s a limitation of the consoles. Still, many console gamers consider it a powerful advantage - they don’t like messing with the ideas of the developers (and be vulnerable to cheating).

Here is a step-by-step instruction on how to install Tekken 7 mods:

The process of installing Tekken 7 mods is as easy as pie. It may be more difficult to choose one from a really vast collection.

For this article, we’ve selected only some examples of game modifications. We encourage you to use links to Tekken 7 mods download, to try them out in your matches, and then check out other awesome creations of your fellow gamers.

Some mods authors do not try to come up with their costume ideas and prefer taking original designs from other Tekken games. Bandai Namco has really good artists, so it’s a good idea to use this amazing heritage. If you take this mod, you‘ll turn Jin into his devil form from the final part of Tekken 4. Look for other Tekken 7 Jin mods and you find both original and classic designs.

Experience a totally new stage of the Mishima family. The new dojo becomes playable in both online and offline modes. It comes with fresh lighting and an additional music track. Check out the new geometry of Mishima Dojo.

Change the look of character panels during the process of choosing fighters - that’s one of the mods in this small pack. The second replaces fighter icons with the artistic pictures.

Add something from Soulcalibur to Tekken 7. This mod changes the stage Infinite Azure, adding visual style from the stage of Elysium, one of the characters from the Soulcalibur series. It’s a nice mod for those who like both these games by Bandai Namco.

If you want to properly understand what the prince from Final Fantasy XV is saying, use this mod. It doesn’t translate the Japanese phrases but changes them with lines from the original RPG. Such modification hardly adds any sense to the Tekken 7 story and lore. Still, you may like the new atmosphere around Noctis.

What do you think - is this costume good for Alisa? If yes, take it and enjoy the game. If not, don’t forget that you can fill her wardrobe with lots of other dresses - there are many Tekken 7 Alisa mods out there.

Start fighting on the stage Forgotten Realm and enjoy the music from the trailer of Death Stranding. This game was developed by legendary Hideo Kojima, and it is worthy of your attention - the same as Tekken 7. You may like the mix between these two gaming universes.

Do you like music from the racing game Need For Speed 4? Take it to Tekken 7! This mod changes the soundtrack for the stage Souq.

What about fighting near that blooming sakura? The place seems to be very peaceful, so it’s like a hint at the peace inside players that helps them fight more effectively.

This mod changes the visual atmosphere of Tekken 7, making stages and characters especially beautiful and much more realistic. You will add some fresh colors and advanced lighting to the game.

Allow your male characters to look especially stylish. This mod changes their clothing to a beautiful dinner jacket. Bring a bit of fresh fashion into the extraordinary customization options of Tekken 7!

If you like using funny character mods, check out this one. Your Panda will look like… a skeleton. You get a pack of two T7 mods. One changes the appearance of Panda to just bones. The second creates a bubble around the bones that indicates the invisible body.

With this mod. you can choose different colors of bikini for the female fighters. By default, this piece of clothes has a flower pattern - it will be removed. This mod shows possibilities of such modifications and makes an example of what you can look for. It’s not one of the Tekken 7 nude mods, but such stuff also exists.

Ok, if we have a mod to demonstrate beautiful bodies of the female Tekken 7 characters, let’s have something from men. These guys put quite a lot of effort into building those amazing muscles, so why hide them behind clothes? Let them fight only in fundoshi, traditional Japanese underwear. It’s a good alternative to Tekken 7 mods nude!

Combine two Tekken 7 stages - with this mod, your G Corp. Helipad will look significantly refreshed with the elements of Arena.

Enjoy the refreshed voice acting for Kunimitsu - she will talk like 2B from the game NieR: Automata.

Tekken 7 is not the only game in the series. There were quite a lot of installments before (for example, we put Tekken 3 at the top of our list The Best Tekken Games). Visuals of old titles may look weird for modern gamers but music rarely gets older. With this music mod, you can play soundtrack of Tekken Tag Tournament 2 in Tekken 7

What do you think about the appearance of Yoshimitsu? Isn’t it weird enough? What about making it even more unusual? Then use this Tekken 7 mod and turn the character into Sir Daniel Fortesque from the PlayStation game MediEvil.

With this modification, you can use the costume of one character for another one. It’s one of the Tekken 7 Leo mods, which allows the German guy to wear costumes of Lee.

Let’s hope that mighty Kuma will not be mad at us for adding this funny Tekken 7 mod to our collection. He becomes so cute with his new green fur. Such a character mod would be super interesting for fans of the classic show Gumby Adventures, but everyone else also can enjoy it.

There are some other types of mods that we haven't included in this post - such as Tekken 7 nude mods. Do you remember that part about the unstoppable power of creativity? The variety of mods is absolutely insane, and if there is no specific thing, you can take the creation mission into your own hands.

Before you start playing with mods, we recommend learning the fighting mechanics properly. DashFight is a great source of info on Tekken 7 and other fighting games. Our guide on How to Play Tekken 7 will be very helpful for beginners.