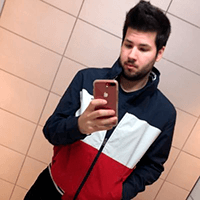 Chris "Blade" Muller is a Smash Ultimate and former Wii U competitive player from the United States. He plays such characters as Young Link, Sheik, and Joker.

Blade had won Frostbite 2017 as a Wii U player back in the day, took part in the next installments of this tournament as a Smash Ultimate player, also appeared at CEO 2019, Midwest Arena, 2GG Run it Back, The Big House 9, Collision Online, and many other tournaments.