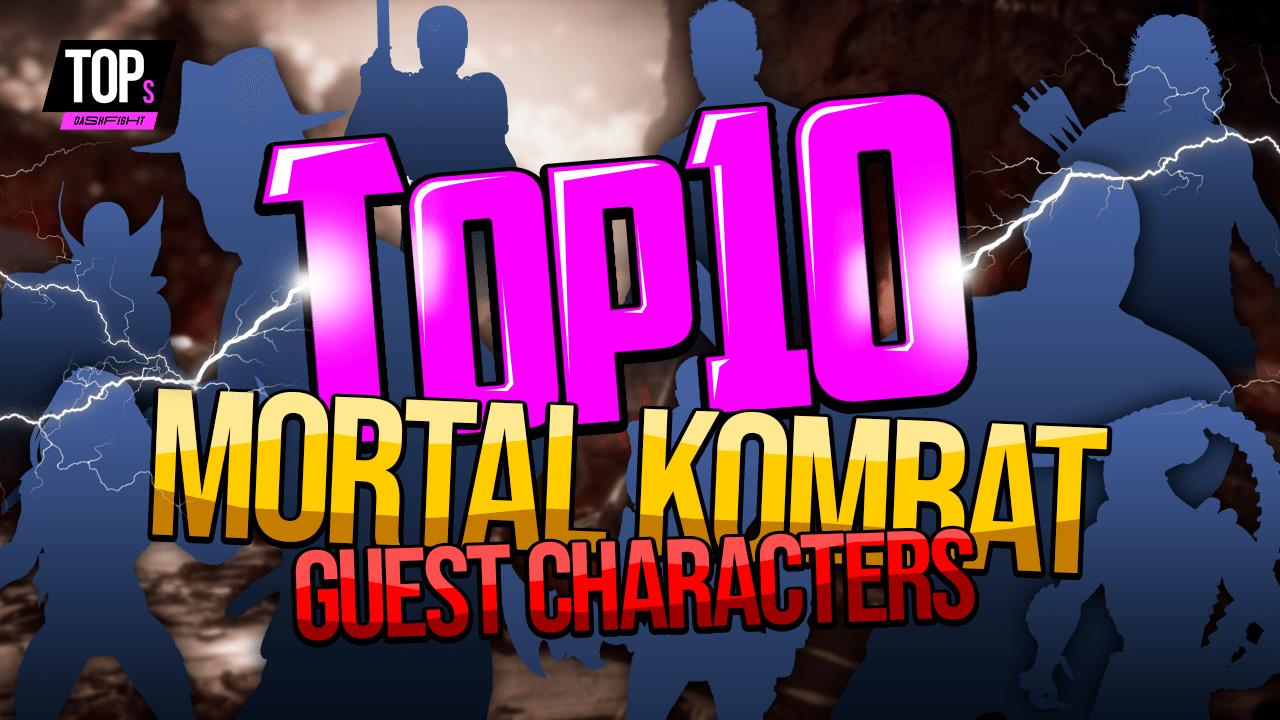 #Video
Blood and Gore galore for the most gruesome series in fighting games, but who is the best guest to appear in it?

Welcome once again to another DashFight Top 10! this time around, we will be showing you our selection of the best playable characters in the Mortal Kombat franchise. As always, our Editor in Chief Dillon will walk you through the action and explain our picks so that you can sit back and relax at the sound of crushing bones, Kratos' screams, and Joker's laugh? Well, you can always read the full version of the video right here! And let us know on our socials if you think we missed anyone in this top 10.

The Alien, otherwise known as Xenomorph, is a terrifying creature that has haunted many dreams over the years. Sure, MK characters are a little nutty themselves, but the Xenomorph is something else. That said, it wasn’t in the game for show as it possessed some pretty impressive qualities depending on the variation used. Alien could be used in several different ways, and its ability to close the gap from full screen to hit confirm and combo was handy for players. With an Acidic variation that added damage to combos and a Konjurer variation where you could delay its hatchling attack, there wasn’t much that this horrifying creature couldn’t do.

Alex Murphy’s tragic backstory that eventually led to his transformation into the metal law enforcer, Robocop, is worthy of the Mortal Kombat franchise. He came into the game in Mortal Kombat 11 and became something of an underrated character. His zoning ability was a great plus for many users with a similar playstyle, and he can be almost impossible to deal with in the right hands. Pros like Arnkratos and A F0xy Grampa have shown excellent capabilities with projectile attacks that can be difficult to get past and the opportunity to create setups. Robocop might not be everyone’s cup of tea, but he is an excellent addition to the Mortal Kombat cast.

The father of the slasher genre made his debut in the world of Video Games in Mortal Kombat X, where he was a playable character. Jason is a rushdown character in the true sense of the word as he is equipped with several tools that keep him in the opponent’s face, not letting them breathe. This is, of course, true to his cinematic style, where he pops up everywhere and is virtually invulnerable. He has armor that lets him continue his attacks relentlessly, and though some of his moves are unsafe and lead to counter-attack opportunities, they are a dream for risk-happy players.

Many remember Todd McFarlane’s masterpiece and most iconic character. For decades his design captivated many, and besides a pretty meh movie in 1997, Spawn has barely been seen in any other piece of media save for Soulcalibur II. Thankfully, Mortal Kombat 11 brought him back into the limelight. As a character, Spawn revels in the footsie game with long-ranged normals that helped him control the space. Besides, he deals significant damage with his hit confirms and can play the zoning game if need be. There might be another Spawn movie on the horizon, so maybe we’ll get to see this character get some justice on the big screen.

Considering the superhuman capabilities of most of the MK cast, you might be tempted to think that The Joker wouldn't fit into the game. You couldn’t be more wrong, though, as the Joker is an absolute monster in MK11. He is a well-rounded character with great normals, zoning tools, and pressure strategies. He is the typical jack of all trades. His introduction into Mortal Kombat was met with a lot of excitement, and from his performances in tournaments, it's safe to say that he is well worth the hype. One of the more left-field additions to MK, but a stroke of pure inspiration.

As far as iconic characters go, there are few as enduring as Terminator. He joined the MK-verse in MK11 and slotted in seamlessly with the colorful character roster. Primarily a rushdown character, Terminator is potentially one of the more frustrating people to come against, thanks largely to his command grab, which deals with serious damage and can be quite difficult to predict. Additionally, he has some low mix-ups and overhead tools that add to his overall menace. He’s certainly not someone you’d want to run into at night in a dark krypt.

I wonder if the Predator would recognize the Terminator if they were ever to fight. Predator was one of the more interesting characters in MKX as he required some training to get the hang of him. With no overhead or low setups to take advantage of, Predator is instead equipped with a slew of variations that enable him to play in any style the user hopes for. His lasers have a quick recovery, his zoning game is decent, and he can trap you in the corner and never let you go if need be. If there ever was a high-tier character, and if you pick up MKX again, you should consider using Predator.

This chainsaw-wielding monster was a terror when the Chainsaw Massacre first hit cinemas in 1974, and the fear of Leatherface has continued over the years, ultimately culminating in his addition to the MK franchise. As a character, he is incredibly rewarding to use. Like Jason, he excelled in cornering his opponents and giving them little to no room to do anything. His Berserker Stance enabled him to keep players cornered successfully, and with his potential for great damage, he was a well-respected character by players all over.

The perpetual God of War anti-hero found a perfect home in Mortal Kombat as he was confronted with several other angry characters he could go to town against. He was one of the first guest characters and was a resounding success. As opposed to what many might assume, Kratos is not a pressure heavy character even though he has a few tools that make that style of play viable. Instead, he thrives in a more meticulous playstyle that capitalizes on whiffs and controls the space around him. His Golden Fleece also made him basically invulnerable to projectiles, and his variety of attacks made him a complete monster in the right hands.

Last but not least is Mr. John Rambo. Solitary. Sullen. Devastating. Rambo joined the MK11 roster with a plethora of setups and great staggers to ensure he could keep his adversaries pressured. On top of that, his Whip Trap makes him very difficult to zone as he can conveniently avoid projectiles while simultaneously keeping the enemy away with zoning tools of his own. He is also voiced by his original actor Silvester Stalone. How neat is that?!

Incredibly, there are well over 10 guest characters in the franchise. We might not see more in Mortal Kombat 11 Ultimate, given that NetherRealms has already said they were stopping the development of new content for the game. But that still leaves the door open in the future to have even more characters, either returning or brand new to one of the longest-lasting fighting games franchises in the industry. Why don't you tell us in our forums which character you would like to see take on the cast of Mortal Kombat?