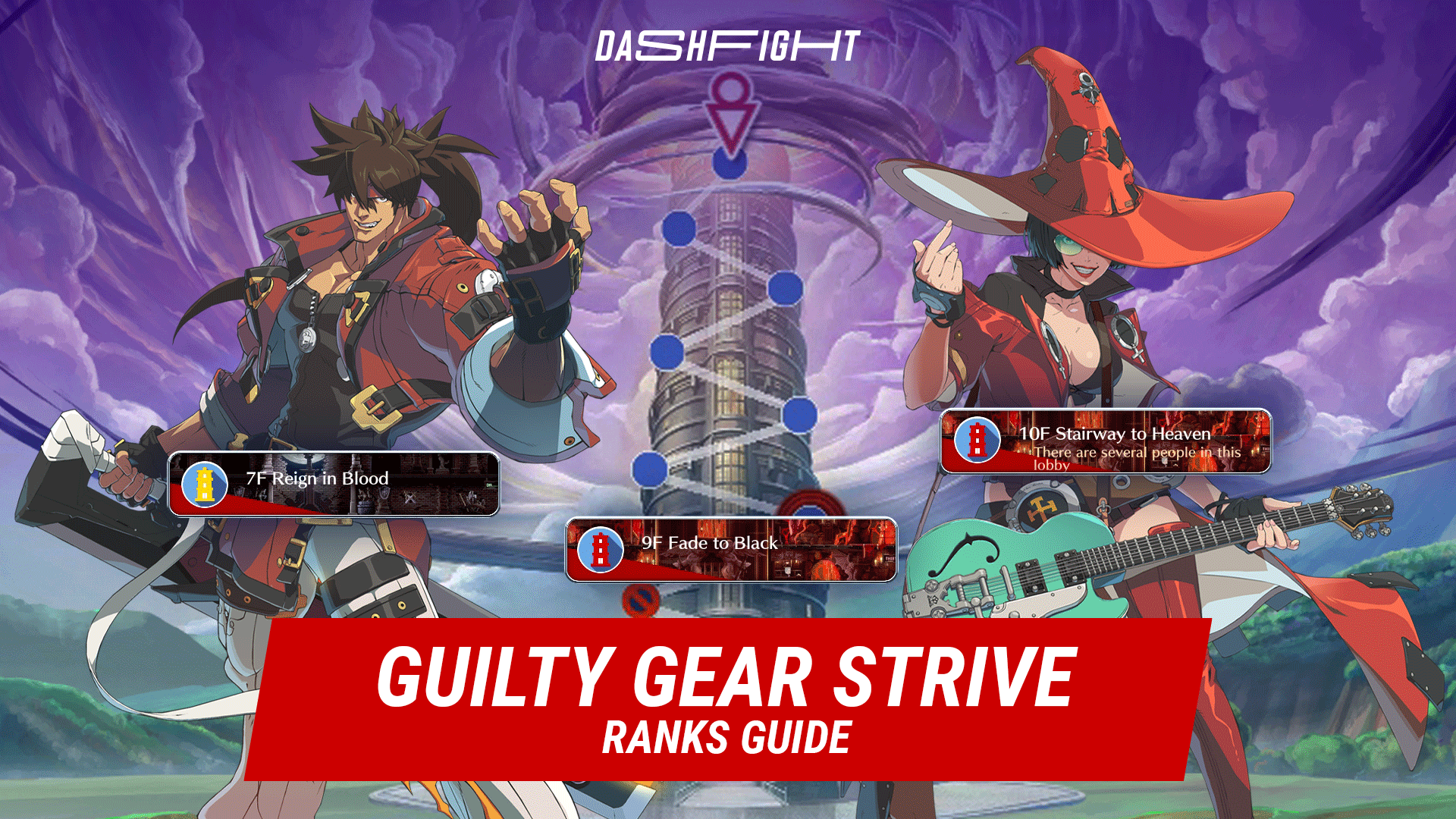 #Guide#Evergreen
Do you want to reach the top of that Rank Tower?

Fighting games are fun — when you play with someone of your level. Dividing players into those levels is the primary practical goal of any ranking system in any fighting game.

Then, it’s a way to give us clear goals to move forward and additional motivation to strive for perfection. Probably, top esports professionals might not be so interested in their ranks as they are more concentrated on the practice itself. Most other players look forward to getting a higher “status” in this in-game hierarchy.

Guilty Gear -Strive- has its ranking system (obviously). It is rather unique, so let’s take a closer look.

The game has a pixel-style lobby for players. When you enter it for the first time, a butler-like man explains everything. But first, he advises you to dress in a more fancy way.

First, the customization options are not that impressive. Later on, you will be able to go fishing for new items — yep, literally fishing. Each fish costs 200W$ and brings one item. If you get a duplicate, the game gives you Rare Fish, and 10 Rare Fish bring you one new item.

Online lobby in Guilty Gear -Strive- made as a Rank Tower with 10+ floors. Each floor represents a specific skill level. After the customization of your pixel character is over, you face the first opponent. He is an AI guy who decides where to send you in the Rank Tower.

This first ranking fight is not difficult. Even if you don’t really know even the controls in Guilty Gear -Strive- but have some prior experience in other fighting games, you have good chances to defeat the virtual guy. In the case of not using cool techniqueы and winning mostly by randomly pressing buttons, you might expect to find yourself on the 3rd-4th floor.

What does that mean in practice? You can explore your floor and meet other players. They stay near special Battle Stations and wait for opponents — you can become one and join the fight. Or you might want to be one of those who wait for other players.

You can take a risk and go to an upper floor — to find a challenging match. But you can not move downwards! Guilty Gear -Strive- tries to save newcomers from overpowered opponents. It’s a very good idea, as you need time to learn the game properly, and it is totally better to have fun during this period, not getting destroyed and start hating the game.

The online lobby here is a bit similar to one in Dragon Ball FighterZ (yep, both games are developed by Arc System Works). Still, the ranking system in DBFZ is pretty different.

How to Rank Up in Guilty Gear -Strive-?

If you keep playing and practicing, you will eventually grow enough to enter the upper floors. How does that happen?

Every few matches, the game activates Rating Update, which analyzes data from your previous fights and assigns you to a specific floor. Again, it’s all about evaluating your skill level and making the Guilty Gear -Strive- matches interesting for you and your opponents.

So, you just need to play better, and the game will allow you to move to a higher floor. How to do that? DashFight’s guide for beginners in GG -Strive- will probably help you take еру first steps

In general, it’s all about improving your skills while playing with different people. It’s a natural process, and there is no need to rush it too much.

The game has convenient tools beyond the online lobby for you to learn new tricks. Visit Dojo (among offline modes) and choose Missions. Explore useful techniques and then practice them in the Training mode.

10 Floors of the Rank Tower in Guilty Gear -Strive-

It’s not easy to reach the 10th floor of the Rank Tower, and still, it’s not the final point of your growth as a Guilty Gear -Strive- player. The game will offer you to take the Celestial Floor challenge and enter the absolute elite — but only for a limited time.

To pass the test, you have to win five matches without losing two (5 wins in 6 matches). The success here means you have access to the Celestial Floor for the rest of the current month and the status of a god-like player. Losing two matches throws you back to fighting against other inhabitants of the 10th floor — you need to prove worthy of retaking the Celestial Floor challenge.

The Online Lobby here is a lot like a social experience. Not every gamer wants to have such activities before actually delving into the fight. For those who don’t want to interact with opponents in the lobby, Guilty Gear -Strive- has the Quick Start option in its Network menu.

You start training with a character of your choice while the system automatically looks for an opponent for you. Matches of Quick Start directly affect your ranking.

Of course, fighting games are not only about ranking. They are also about training for getting a better rank. Or not? I heard some players want to just have fun in Guilty Gear -Strive- without caring too much about that Rating Update.

Anyways, for both purposes of training and fun playing, the game has Park. It’s an additional option inside the Rank Tower — an analog of Casual Fights in some other games. You meet other players, have matches, and get experience without affecting the Rank Tower placement.

You Rank in Guilty Gear -Strive-

The game doesn’t reveal much info on how it evaluates players. You don’t have clear ranks here like in Tekken 7, for example.

Still, some information is displayed on your player card.

If you want to see your placement in the Global Ranking, there is such an option in the game menu. Enter it, and you’ll find the information about leaders in different categories, such as Ranking of the Celestial Floor of Character Level Ranking. You can see R-Codes of the players here or sort the list. Are you among the leaders?

Rankings might be a good tool for “feeling” your progress in a fighting game. But also, it might become a source of stress if a player cares too much about their rank. They might even forget the fun aspect and concentrate only on ranking — that might be a way of becoming an esports professional, but it shouldn’t ruin your emotional experience.

Guilty Gear -Strive- has a very good ranking system. It gives a space for beginners to enjoy the game and provides dedicated fans with decent challenges.