Get on My Level Online North America Finals Summary & Highlights 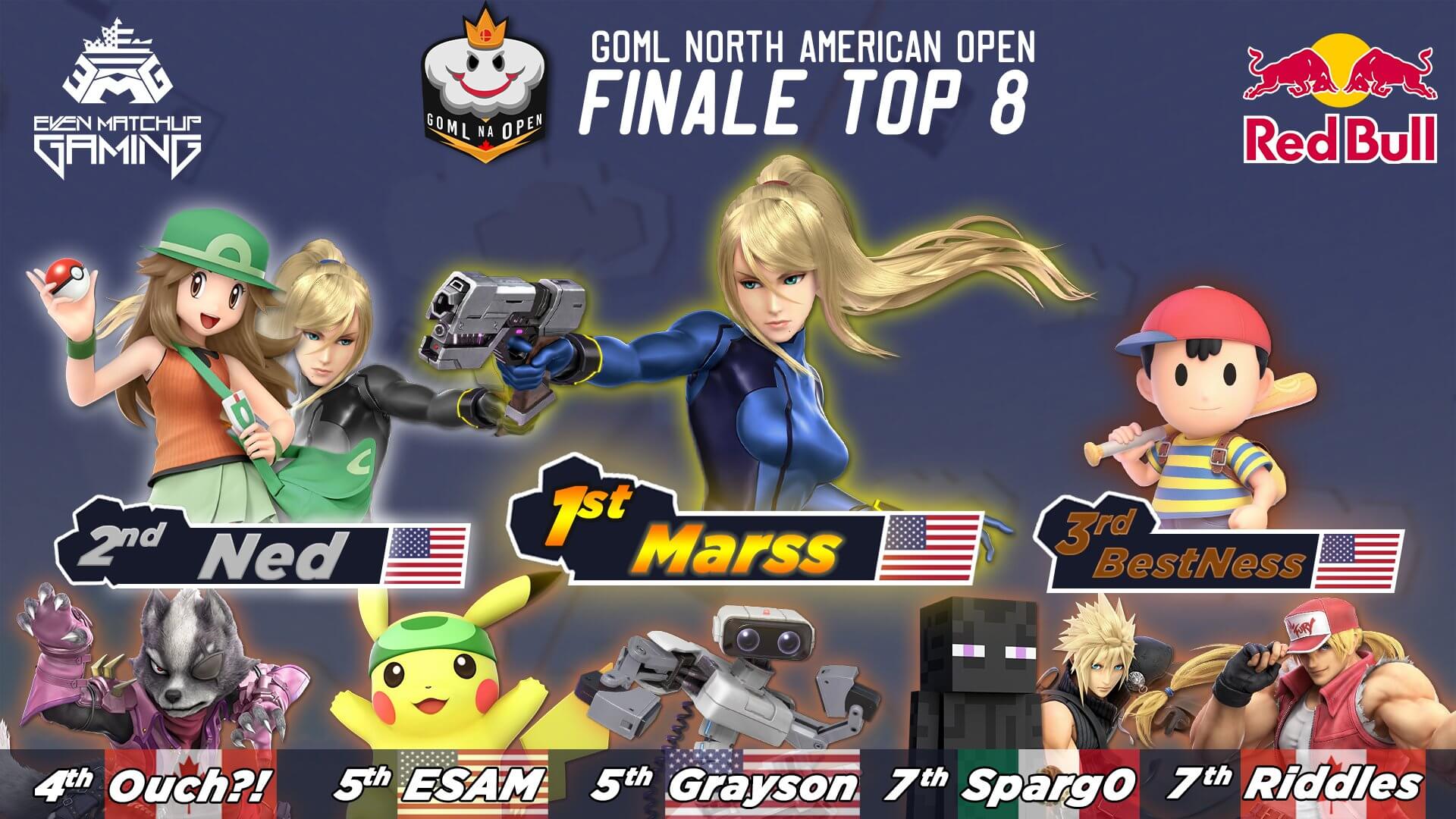 Image courtesy of Get On My Level
#News
The Get On My Level Open North America event might be over, but it was a treat to watch these amazing players duke it out.

This weekend saw the end of the open circuit online event that started back in early September. After eight regional qualifiers, players logged in once more and competed for the winning title, accompanying bragging rights, and oh yeah, $5000 USD in the prize pool. As well as an all-paid expenses trip for GOML 2021, which will happen once the current pandemic subsides. The eight players that participated in this final circuit were:

On Saturday the competition was kicked off by Marss, on his classic Zero Suit Samus, versus Ouch on Wolf. Ouch was only able to take out a single set off Marss. Though that would be the best results pretty much anyone would be able to accomplish against him.

BestNess then had a great start versus Riddle with a clean first stock. The game would end on a 3-1 in favor of BestNess. And sadly this would mark the tempo for the rest of the night for Riddles as he moved to the lower bracket.

Sparg0 versus Grayson was next. This game marked a change in the results from 3-1s with a great comeback by Grayson. Sparg0 represented the Steve crowd by choosing to play the newest character in the game, though this did not result in a lot of wins.

Finally, it was ESAM versus Ned for the final game of the first round of uppers. It was a pokemon versus pokemon galore. ESAM was looking to secure the game with a 3-1 after a great Battlefield result. But Ned came back to the stage and won it back on his last stock at 80%.

Marss versus BestNess was a treat to see, as both players fought pretty much for every stock. Although the score might not reflect it, BestNess did try to spicy up his gameplay but was simply unable to overcome Marss' adaptability.

Ned then went up against Grayson and chose to switch over from pokemon trainer over to Zero Suit Samus. Grayson remained on his R.O.B. He took the first set but Ned recovered for the second set and showcased some excellent air control over his opponent which would ultimately win him the match.

Starting in the lower bracket was Ouch versus Riddles. Sadly the Canadian Terry would not be able to turn his luck around and was knocked out of the event.

ESAM had better luck on his match versus Sparg0. Who, after losing with his Steve, went over to his classic Cloud pick but that was still not enough to overcome ESAM's Pikachu.

Although out of the upper bracket, Grayson still had a chance to return, though it was not to be. As Ouch continued to carve his path in the lower side of the bracket, technical issues notwithstanding.

ESAM started strong versus Bestness. For the first set, he went with Min Min and held off Ness at a pretty solid distance getting great off-stage kills. Still, BestNess adapted once again, even after ESAM returned to Pikachu after losing two sets back to back and so BestNess advances to the next match.

For winners, it was down to Marss versus Ned. Marss picked up the advantage in the first two sets. But ned secured himself at least one set with some brilliant plays in the third set with Ivysaur. Ultimately, in Battlefield MArss would take the final set needed to continue.

Down under, Ouch battled out with BestNess. Ouch had been going strong in the lower bracket. Ness did prove too difficult for the Wolf to beat. Ouch did put up a fight but BestNess ended up winning the 3-0 with clear control of the sets. Still, the Wolf did make for some great highlights.

Thus, we reach our top three players for the event. Marss, Ned, and BestNess. These latter two had a 3-1 series which started pretty close with BestNess taking the first set on the last stock. And so the entire series would always rest on that knife-edge as both competitors looked incredibly evenly matched. In the end, Ned would ick out his third set win with an amazing Charizard recovery and follow-up.

And so we come up to the Grand finals. A rematch of the winner's finals and it was clear that Marss wasted no time getting ready for the matchup. Starting strong with his first stock by winning one over Ned and then adding 100% before finally giving up his first stock. On that 2-1 situation, Ned managed to push an unforced off-stage error out of Marss after struggling to keep up with him. With things 1-1 and at an 85% disadvantage Ned eventually folded to Marss. The following two sets would the way of Marss and he would secure the grand victory.