Get on My Level 2020 West USA Online Regional Qualifiers Preview 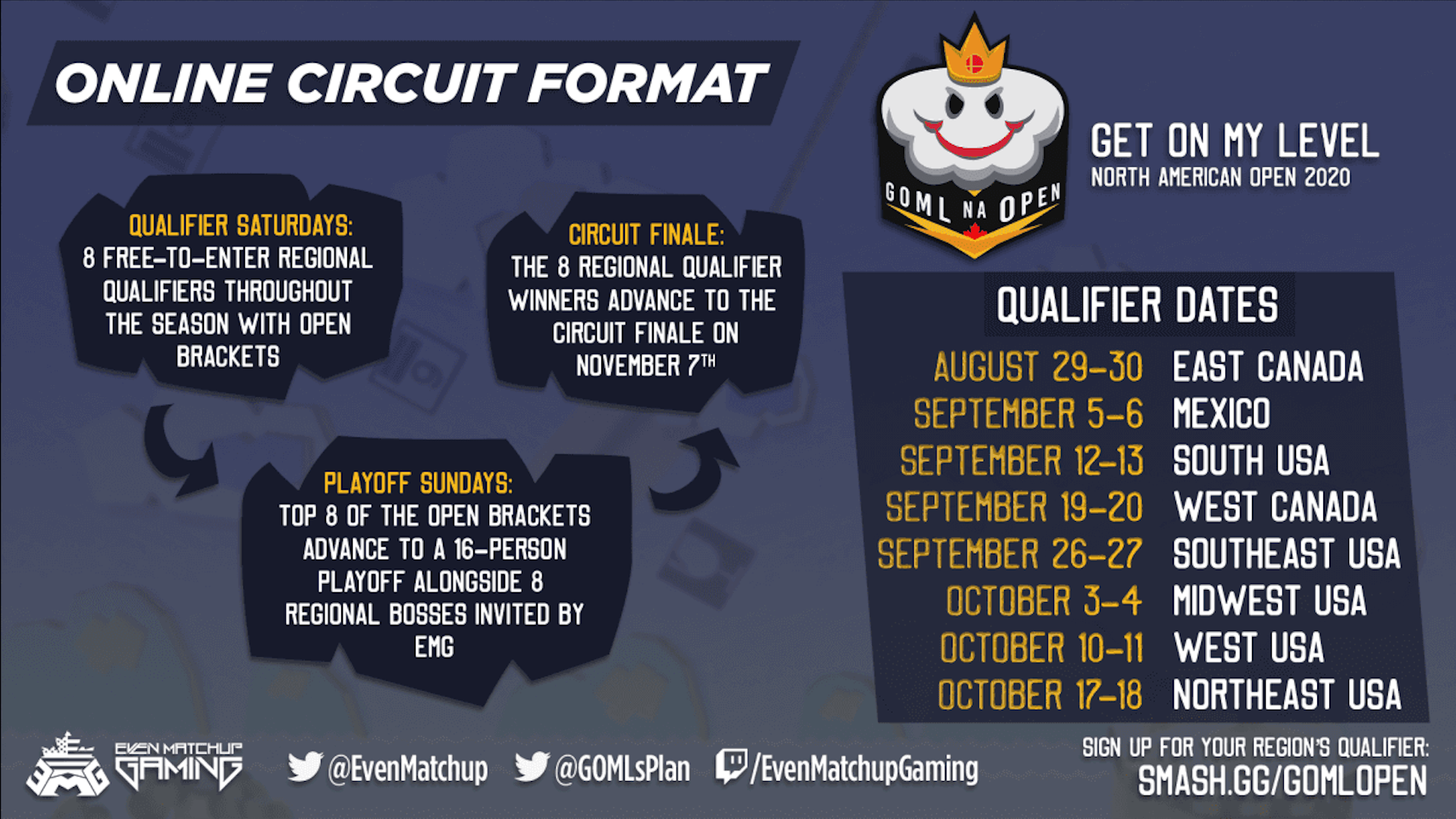 Get on My Level
#News
Everything you need to know ahead of the action packed weekend for the GOML online regional qualifiers for West USA.

2020 has undoubtedly put a roadblock to LAN events. But most tournaments and organizations have adapted to the online-only format esports had to adopt for the time being rather quickly. GOML, one of many Super Smash Bros tournaments, is no exception. In late March, the organization announced on twitter that it would be canceling its opening event and other planned LAN events. At least until after the epidemic is over, to guarantee the safety of the staff and attendees.

Never the less, GOML and host EvenMatchupGaming put together a fantastic online circuit for North American players. All from the safety of their homes. A chance to compete for a chunk of a ten thousand dollars prize pool and a spot in the Circuit Finale later in November.

In each regional qualifier, up to 256 players will compete in one of eight brackets on Saturday. Then on Sunday, the top eight players from the previous day will face off against eight invited top-ranking regional bosses in a double-elimination bracket. The winner of which will take home $1000 and a ticket to the circuit finale.

So far, six of the eight regional qualifiers have been completed, with the winners being:

This weekend, the 10th and 11th of October, the West USA region will get the spotlight to showcase its talent. The event is obviously limited to players currently living in Washington, Oregon, California, Nevada, Utah, Montana, Wyoming, Arizona, Colorado, or Hawai. For more details on all the regional qualifiers, you can check out the Get on My Level Smash.gg page.

A total of 201 players have signed up to compete this weekend. Of course, each of these players will attempt to win their bracket and get themselves in the playoffs. But there are a handful of competitors that are expected to rise above the rest:

Every stock will be valuable on day 1. Single-elimination brackets can be brutal and with the seeding yet to be decided for the event some players might wake up having to prepare for some very difficult matches. Day 2, although allowing for some mistakes with its double-elimination format. Still poses a big thread with the invited top players likely to shape the upper bracket early on.

Where to Watch and when?

You will be able to catch the western USA clash on EvenMatchupGaming's twitch channel. For Start times and Commentary teams, check out the information below:

For more on Super Smash Bros Ultimate and other Fighting games, you can follow us on Facebook and Twitter or join our special Discord server to meet other players from the fighting games community.