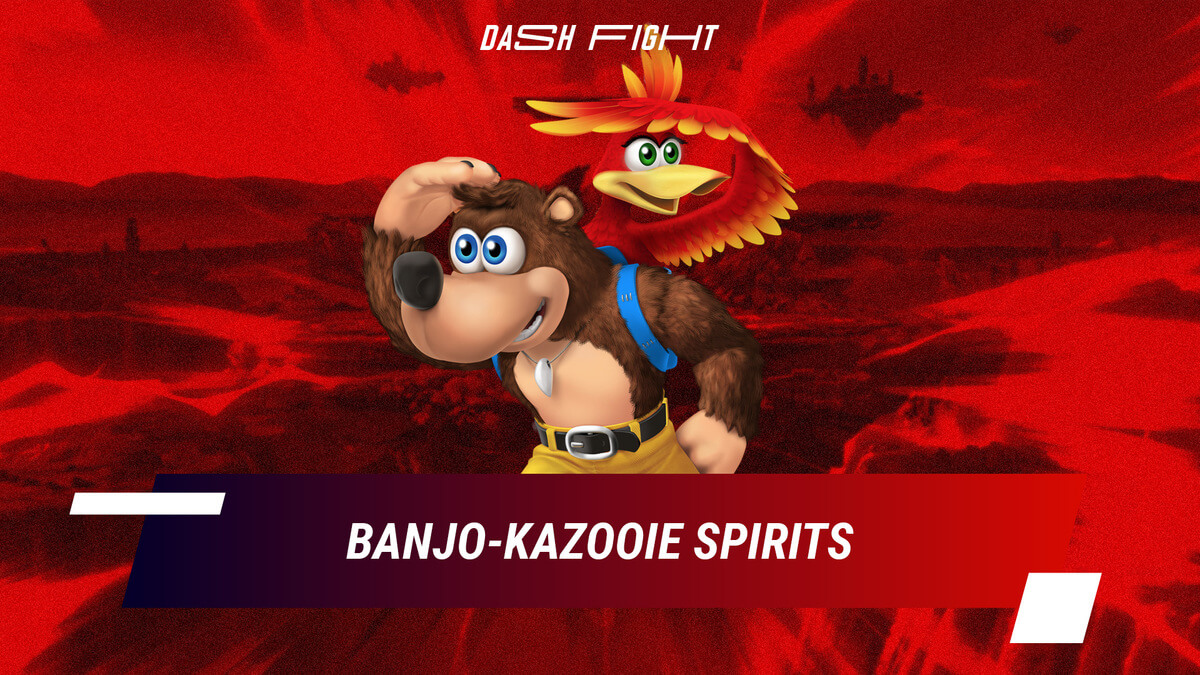 Nintendo
#Guide#Evergreen
Take a look at all the Banjo-Kazooie spirits in Super Smash Bros. Ultimate. DashFight lists the names and specifies types, abilities, and power.

There are so many fun activities in Super Smash Bros. Ultimate that even just trying them out will take quite a lot of time. What to say about achieving every goal in this amazing game and reaching the level of mastery with the character of your choice?

One of such activities is collecting spirits. They have replaced trophies in the previous Super Smash. Bros games. Do you like this feature? Let’s take a look at the spirits from the world of Banjo & Kazooie!

Probably, the biggest promise of this game has been made with the slogan “Everyone is here!” And the developers kept their promise and added all the fighters from the earlier games (such as Captain Falcon) and a lot of new characters (such as Joker).

Is the community satisfied with this? Not really! People want “everyone from everywhere”, asking to add lots of other personalities from every imaginable gaming franchise. This is absolutely impossible, but Mr. Sakurai with the development team came up with a brilliant idea - they expanded the variety of game characters by adding their spirits (and Mii fighters).

Of course, it’s not the same as having those guys and girls actually competing in the multiplayer matches. Still, it’s a great solution, and you can see many familiar faces.

How to use spirits in SSBU?

They give some advantages during fights Adventure Mode (World of Light) or Versus mode with enabled spirits. All the spirits are divided into four types:

They have the rock-paper-scissors type of interactions.

Also, spirits have classes - from one to four stars. The higher class means the bigger strength of the spirit.

After the update 8.0.0, the game has 1424 spirits, and this number will definitely be increased.

The primary way to collect spirit is to complete story missions of the World of Light mode. Also, you can get them in the Spirit Board and from special events.

The bear and the bird came from popular platformers. Previously we mentioned the origins of these fighters in the article Super Smash Bros. Ultimate Banjo-Kazooie Guide: Moves. Spirits also came from the same games.

This mole is of the Shield type, has two Class stars, and takes two slots while equipped. Bottles Banjo-Kazooie has no specific abilities.

The shaman Mumbo Banjo is of the Grab type, has three Class stars, and takes three slots while equipped. The ability of Banjo Kazooie Mumbo Jumbo is the increased Magic Attack.

These creatures are of the Neutral type, has two Class stars, and takes two slots while equipped. Banjo Kazooie Jinjos can be enhanced to the Lv. 99.

It’s a more powerful version of Jinjos. The creature is of the Neutral type, has three Class stars, and takes two slots while equipped. The ability of Banjo Kazooie Mighty Jinjonator is being Giant.

The bear-girl has two Class stars and takes one slot while equipped. Banjo Kazooie Tooty’s ability is reduced poison damage.

It’s an alive jigsaw puzzle piece with big eyes. It has one Class star and takes one slot while equipped. The ability of Banjo Kazooie Jiggy is lightweight.

Gamers may know this witch as the main antagonist of the original Banjo and Kazooie games. In Super Smash Bros. Ultimate, she has four Class stars and takes three slots while equipped. The ability of Banjo Kazooie Gruntilda is poison power up.

This dragonfly also was an enemy of Banjo & Kazooie. In SSBU, it has one Class star and takes one slot while equipped. The ability of Banjo Kazooie Buzzbomb is floaty jumps.

Like other fighter spirits, this one is only a game collectible. You can’t use it in the game, but having it is such collector joy!

Good luck in collecting all spirits SSBU Banjo-Kazooie! And if you need some help with game basics, take a look at our guide How to play Super Smash Bros. Ultimate!

For those who like delving deep into the fighting mechanics, we recommend checking out the article Understanding Frame Data in Super Smash Bros. Ultimate.

Stay tuned to DashFight on Facebook, Twitter, and Discord for getting interesting and useful SSBU posts directly into your social feed.