How to Play Against Erron Black Guide with JoshTQ 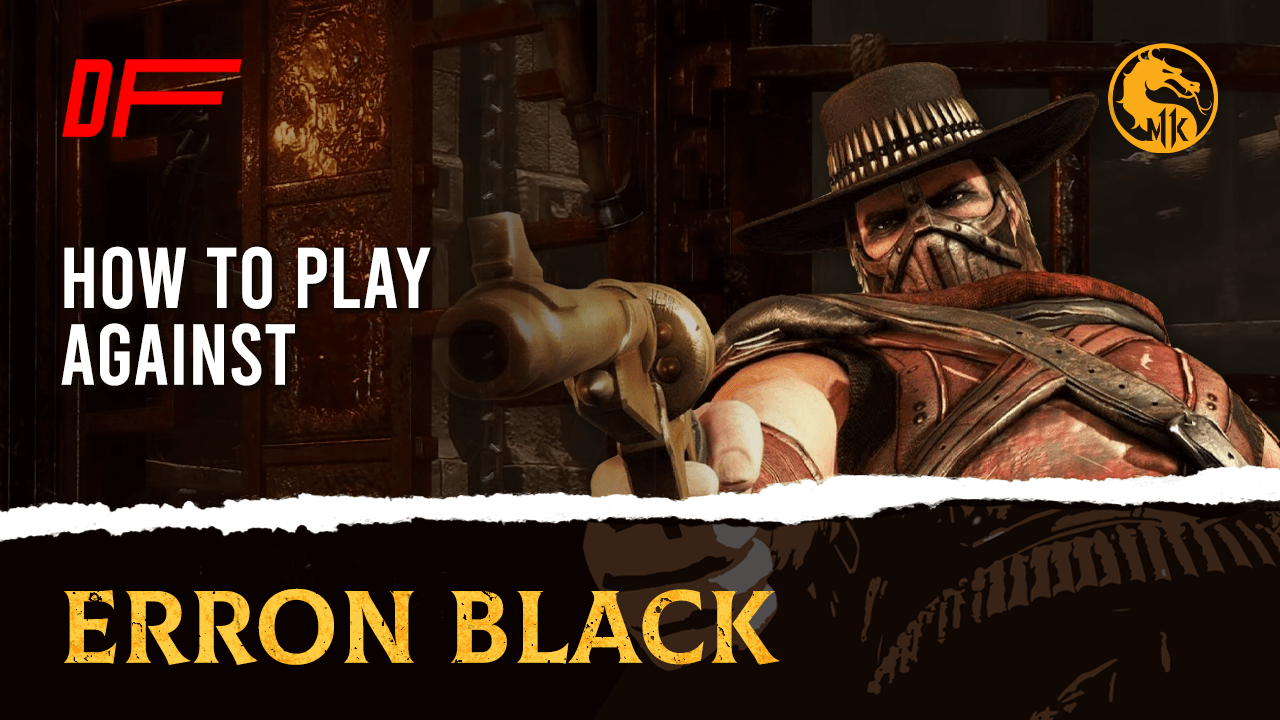 Erron Black is an Upper tier character that can be a lot of trouble to deal with, but we have all the necessary tools against him in this article

Erron Black is one of those characters that you are bound to come across while playing online for Mortal Kombat 11. He can be a handful to deal with even for the best players, so to give you some help as to how to deal with him, we have this guide created by JoshTQ.

Josh is a UK Mortal Kombat 11 player who has some notable tournament experience including the Lockdown Throwdown 2020 Online Tournament where he placed 1st. He has also created an Erron Black guide which you can check out here.

So, if you find yourself up against an Erron this guide will teach you what to do against him and how best to defeat him.

How to Play Against ERRON BLACK guide by [ JoshTQ ] | MK11 | DashFight

The first thing we must discuss is Erron's playstyle. If you are to beat an opponent, it is best that you know how the opponent operates. For Erron, he is a little tricky as one of his biggest strengths is his versatility. Erron can be played both offensively or defensively. For an offensive player, they will likely make use of Erron's excellent strings to get in on the foe and hit them really hard. He is also equipped with a command grab which keeps the opponent guessing when he comes close. On the flip side, he also has a strong lame game thanks largely to his rifle. With his rifle equipped, Erron can keep players away and manage the space in front of him with his Zaterrean Spit move. All these things make Erron slightly unpredictable, but you can perhaps figure out how the opponent is going to play by the moves they employ in the fight.

Erron Black has a fair few variations you could play with, but the one I use typically consists of these moves:

Cattle Toss is a necessary move to have in your arsenal as it allows Erron to move in close to the opponent and make them think. Erron can find it difficult to open characters up, so you can use this against him and you can be rest assured that most Erron Black users will opt for this move. Scud Shot allows Erron to control the space better and is almost a perfect move but for the ability of some characters to low-profile the move. Meanwhile Locked and Loaded grants access to launchers and some ridiculous meterless damage. What most Erron players might do is also add Acid Pour to the mix in place of Locked and Loaded.

In this section, we'll look at the moves that people struggle with when facing Erron Black and we'll consider ways to deal with them or punish them.

The Drop Boot move can be a hassle to deal with when facing Erron, but the good news is that there is a way to deal with it. If you flawless block the move, it has a lot of blockstun which could make it difficult to punish. But, if you block and then delay your U2 punish, you will be able to catch him. So, ensure that once blocked, you exhibit some patience and then uppercut him to oblivion.

This is another of Erron's moves that people struggle with. The mistake people make with this is that they try to guess and make a read when they should simply react to it. The B2 slide mix-ups are risky for Erron and it's never particularly in his favor. Simply punish him optimally and ensure you condition him not to throw it out.

Erron's rifle is a pain to deal with and there isn't a sure-fire way to deal with it. The best any player can do is be patient until he runs out of bullets. It is best for you to approach Erron cautiously while he makes use of the rifle as rushing will only get you killed. If you walk slowly and block often as you approach, you're more likely to wear him down and gain the ability to hit him hard.

In this section, we'll look at Erron Black's weaknesses which can be exploited by just about anyone on the roster.

Erron Black's walk speed is poor and while you can get him to dash forward somewhat quickly, he is really poor when it comes to back dashing. Erron's inability to move across the screen with alacrity makes him an easy target for much faster players who can glide around the screen.

While you might think that Erron has a lot of range thanks to his rifle and his boot drop, in reality, a lot of his normals are really stubby. This means he is unable to punish some things as well as he should.

While most of the cast has such a move, Erron doesn't - meaning that he cannot punish strings that many in the cast can. His best bet is D1 which is a stubby button that might not reach. So if you're up against Erron, you can somewhat fight safely knowing that he will struggle to punish some things.

Okay, maybe that's a bit dramatic, but it is true that Erron Black has very, very few strings that are plus on block. The only one of note is his 1, 1, 4 string, but the problem with that is it has a flawless block gap which can be punished

Some of Erron's best strings are dial-in strings but they are problematic as an opponent can press up and counter it rather easily.

Things to Avoid When Playing Against Erron Black

In this section, we'll be looking at things you absolutely do not want to do against the cowboy

This is tech that Erron can use against specific characters that you must be really wary of.

Liu Kang: You can make Liu's F4, 3 string whiff by down blocking. When you do this, the string will whiff from some ranges and you can punish accordingly.

Skarlet: You can interrupt Skarlet's 1, 2, 4. This is easy enough and all you need to do is D1 her in the middle of her string

There are some matches you will absolutely love playing against Erron because he is at such a disadvantage in these fights. So, if you are having a difficult time with Erron Black, consider using these characters:

Fujin's walk speed is the major problem here. You see, Fujin is really fast and this is bad for Erron as he is unable to establish a neutral game. Also, his rifle tactics don't work with Fujin who can airwalk with ease and destroy Erron. So, if you have an Erron in your life, Fujin is your best bet against him.

This is another really difficult matchup for Erron Black. Any Erron player will have to flawless block a lot to counter Cetrion's rock wall. But, if you are using Cetrion, you can play lame against Erron and simply keep him away. He will be powerless to do much.

Joker is problematic for Erron for so many reasons. For one, his Jack in the Box cannot be flawless-blocked and he is also able to easily outrange Erron. Furthermore, Joker is also one of the faster players in the game which as mentioned before gives Erron problems.

Erron Black is an upper-tier character with a lot of things going for him, but if you have the right characters against him and use some of the tech here, you will be able to defeat just about any Erron Black player. Of course, truly accomplished Erron players might have devised ways against all the things mentioned here, but you will win against most Errons that you run into online and offline.