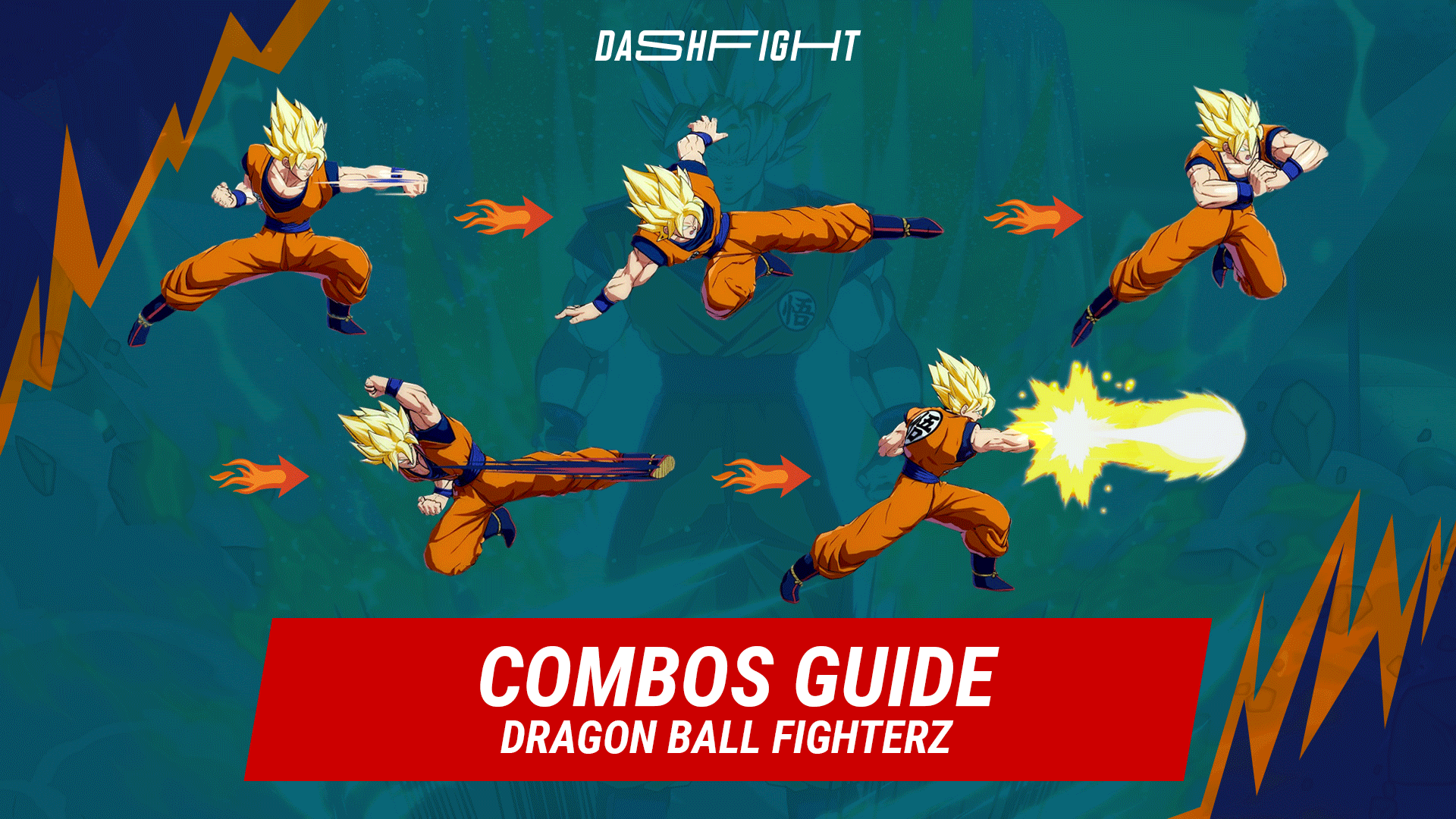 #Guide#Evergreen
Strengthen your game with cool combos. The article explains the basic info (with examples), so you can learn how to build your own DBFZ combos

Landing long destructive combos in fighting games is so satisfying! Dragon Ball FighterZ opens excellent opportunities for this — thanks to auto combos, even beginners to the fighting genre can easily experience this joy. Still, auto combos are rather kids toys; they significantly limit your possibilities in fighting matches. When you step into the multiplayer fights and start facing more-less experienced opponents, only extended manual combos give you a chance to succeed.

So, let’s start learning those DBFZ combos! For sure, no guide can replace your fighting practice and brave experiments. Still, it’s nice to understand the combo principles in this game and have a solid basis for chaining various attacks and moves.

I would still prefer starting this Dragon Ball FighterZ guide by explaining auto combos. They give an awesome effect at starting stages for so many players, and it’s better to know them deeper than just “press this button repeatedly, and your character will do something cool.”

The first two attacks of the L Auto Combo are pretty significant for manual combos, many of which start from the second hit 5LL. You can link Medium Attack into it.

For more details on controls in DBFZ and other basic info, check out our Dragon Ball FighterZ Beginner Guide.

If you are ready to move beyond the auto combos, the game itself will provide you with enough tips (tutorials of the story mode; combo challenge of the practice mode). One of them will be the general sequence for chaining normal attacks:

For most characters, you cannot change this direction and move from H to M and to L. It is possible to mix crouching and standing attacks. Heavy attacks often cause wall bouncing, so you can extend them with a Super Dash (H+S) and the repetition of the L>M>H pattern.

Unlike the Street Fighter combo system, Dragon Ball FighterZ doesn’t require being very precise in activating the next attack/move in such chains. The game recommends doing that when the current attack lands. In practice, you can often just press buttons one after another and enjoy the spectacular show.

The simplest chain is good and everything, but have you ever watched professionals landing Dragon Ball FighterZ combos? They find an opening, and then the series of attacks seems to be endless.

The more hits you can deliver in your manual combo, the more damage it will deal to your opponent. The question is — how to extend a combo? Here we have a few tricks that allow you to connect chains of normal attacks, special moves, and super moves in DBFZ.

The very core of combos in fighting games is to not allow the opponent to recover and activate block, escape, or counterattack. Successful combos keep the victim busy, so your character can perform their next attack/move before getting any response. Combo extensions give precisely such a tool.

There are a few extensions you can use. It would be better to understand their features, bring them into your practice mode lab, and use them to create your own most effective combos in Dragon Ball FighterZ.

It’s a very useful thing to add to combos. Almost any normal attack in DBFZ can be canceled into a jump. That means you skip the recovery animation for your character and start the next action immediately (jump in this case or forward jump to keep closer to the opponent). Then, the jump itself can be canceled into a normal air attack, so you continue your combo.

Of course, your attack should launch the opponent into the air to be followed by Jump Cancel. Crouching Medium + Medium — it’s a good choice for this:

Also, the three first attacks of the L Auto Combo do the trick.

It is totally possible to use Jump Cancel twice in a combo. The second one can be performed in the air, for example, after 2H in the air that launches the opponent even higher.

This is one of the unique mechanics in DBFZ. You press M+H, and your character “teleports” to appear behind the opponent and attack them. Most Vanish attacks launch the victim and make them bounce from the wall. You can use this time to get prepared for the next part of your combo and catch the opponent with a new series of attacks.

Vanish consumes one bar of Ki energy. Usually, you can activate it after Heavy Attacks or Special Moves. Some good follow-ups after Vanish are Super Dash and the simplest L > M > H chain, M with JC, Super Moves, or Z Assist / Tag.

Vanish allows players to add another wall bounce to their combos (normally, you can have only one after your Heavy or Special).

Smash prolongs the recovery period for the victim, so you have a chance to use Super Dash and then land the next attack. Some Special Moves in DBFZ also have the Smash effect.

The simplest way to get the thing in practice is to land the L auto combo — you’ll see Smash written on the screen.

This great feature of 3v3 team fights can be used to deal extra damage and extend combos. You summon support from one of the inactive team members and use their power to let your current fighter prepare the next series of attacks.

Such a combo extension is not too straightforward. Its effectiveness strongly depends on your characters. their assists, and even opponents. Practice mode experiments are crucial for weaving Z Assists Into your DBFZ combos.

The same is true for tagging other characters and bringing them to fights to continue combos — new fighters appear with Super Dash.

When you slam the opponent to the ground with some attacks, they slide for a while. This sliding period is perfect for activating a Super Move as a cool combo finisher.

How to Combo in Dragon Ball FighterZ

Everything in this guide so far looks a lot like Lego bricks that need to be placed into your personal construction — actual game combos. But how to connect them? Hot to move from theory to practice and start combo in DBFZ?

In general, there are three ways to do the magic:

Ok, it looks like the third way is the most efficient — you don’t copy something blindly, but also, you don’t spend too much time experimenting.

So, what about getting more substantial “bricks of someone’s combos?” (which are certainly just general examples and should be brought to fighting practice — you know, by you)

The basic manual combo flow is:

You can use here Special to Super

An example of using Jump Cancel is the following:

Extend this JC combo with 2H:

You can finish this with the Smash effect + Super Move:

Heavy after 2H can replace Super Dash — this technique will be performed automatically. For example, you can perform two circles of the basic combo before using the Jump Cancel:

Vanish is an effective extension tool to use close to the end of your combos. For example, you can use it after j.236S for Goku Super Saiyan:

Or you can use Vanis conversion after different sorts of combos:

It All Depends On Your DBFZ Characters

That’s it for the universal basis. Everything else concerning combos in DBFZ depends on the character you use, their teammates, and their assists.

Here is a table with a few combo examples for different fighters. They also can be used as those bricks for your combo practice.

For a deeper dive, don’t miss character guides created by professionals. DashFight has already published videos on Janemba by Nitro and Vegito by Tyrant.

One Step At a Time

Such an amount of information on combos in DBFZ might be disturbingly confusing: “I totally have no idea what are you talking about”; “I understand that expansions concept but can’t perform even Jump Cancel properly”; “I just want to have fun in the game, with no tiresome learning.”

The key to not get overwhelmed and convert the theory into practice while still enjoying the process is to take one step at a time. The game is great, and using combos in it should only boost your excitement.

Combo Challenge of the practice mode could be very helpful in this process. The game gives exercises for each character and checks how you perform combos — from auto to pretty interesting manual ones. The secret here is repetition. If you managed to perform a string after 18 attempts, it doesn’t mean you’ve learned it. Do you remember that thing about muscle memory? Return to the combo challenge and repeat those you find useful for your playing style.

Hopefully, this guide boosts your practice, and after putting in some (exciting) effort, you will combo like a pro!