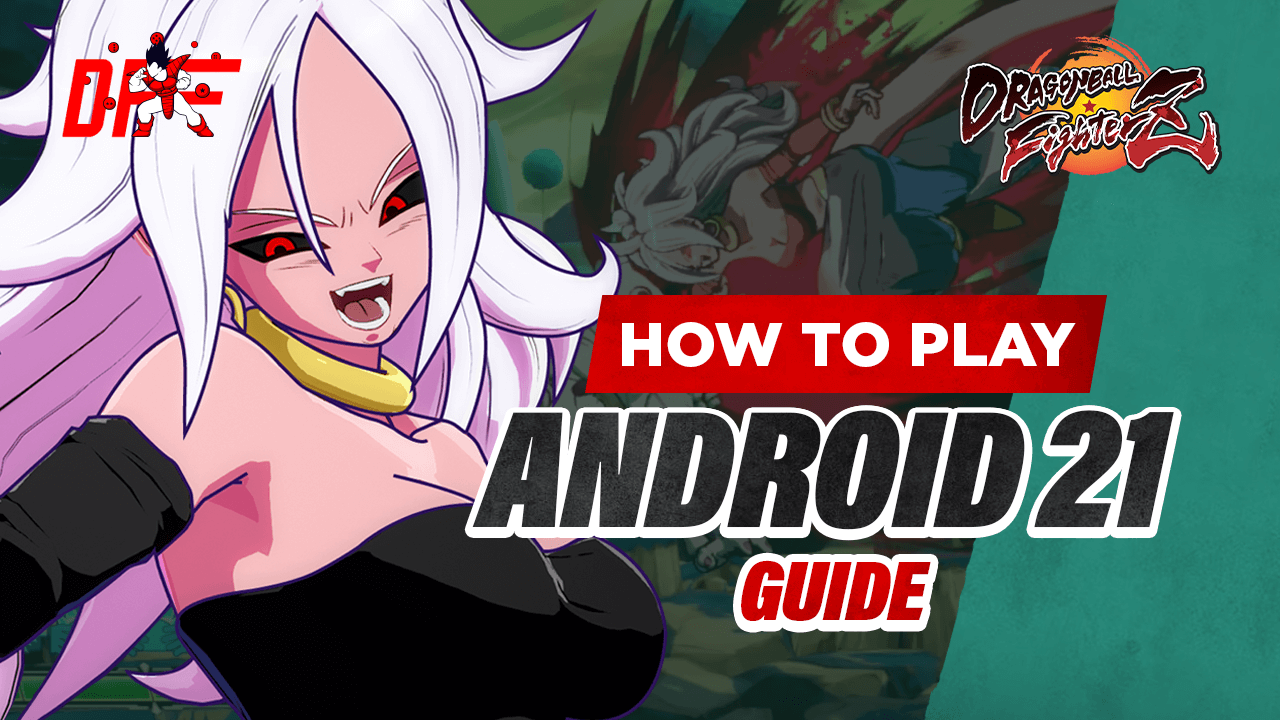 She is reliably strong in this her evil form

Android 21 is such a cool character! Story-wise, she was created especially for DBFZ, so her very presence makes the game precious in the Dragon Ball universe. And gameplay-wise, she is one of the strongest in the roster, well-represented in casual matchmaking and on the pro esports scene.

Her fighting style is based on effective neutrals. Dangerous projectiles allow Android 21 to control the space. Steal abilities add some extravaganza to 21’s style.

Let’s delve into many details on playing Android 21 in Dragon Ball FighterZ! We at DashFight are proud to share with you guys a new video guide created by the NA Champion, Nitro.

The buttons you really wanna look at for the neutral game and the footsies are 5M and j.M. They cover so much range that they end up scaring your opponent off. Thanks to this, you will have some space for yourself.

j.H is also one of the best buttons for Android 21. The attack is two-sided (like one of Android 18). It’s a simple cross-up tool.

Another great thing about Android 21 is her 2S. Nitro calls it a broken ki blast. It covers a wide range. It is hard for a lot of opponents.

5S counts as two ki blasts, so it comes through single projectiles.

Android 21 has an easy offensive structure. She has 2L, which is very special, having only -2 on block and reaching pretty far. It’s an effective pressure tool.

Android 21’s stagger pressure is one of the best in the game. Her command grab also can be counted as a pressure tool. It might be slow, but the animation is subtle, and it’s not easy to see that coming. In addition, you can mix up the command grab with other attacks.

The pressure by this character is very special because Android 21 is not limited to those tools she already has and can get even more. Steals give her additional mechanics and improve the stats of 236H, Total Detonation Ball. It comes from +5 on block with 1 Steal to +20 with 4 Steals. Depending on the number of Steals, you can change your mixups.

Those Steals are for the neutral game. The favorite one for Nitro is Sonic Warp (purple). It can be used in many different ways — Nitro shows some in the video.

Nitro mentions Steals as the basis for 21’s gameplan. And then, he explains the strengths and importance of her Level 3 Oki. It’s ambiguous left-right, and it’s hard to see, as Android 21 can use a same-size option as well.

Having a plus frame with Steals is a significant advantage for the character. The big variety of Steals enhances her already destructive neutral.

Android 21 has tools for both keeping a distance and fighting at a close range. Her 236M is an effective anti-air, and it can be canceled with Super Dash.

Nitro says that only one character does the screen control better — Broly. But Broly doesn’t have Steals and anti-air grab.

j.S is good as it has a cancel option. If you see them super-dashing you, you can cancel j.S into the grab.

BnB Combos for Android 21 in DBFZ

Her combos are rather easy. Technically, they are normal BnBs that any character can do.

Nitro demonstrates these combos in his Android 21 guide:

This section turned out to be the hardest for Nitro — it’s not so easy to find what Android 21 is bad at.

Just watch this! It’s funny to see Nitro experimenting with various tools and looking for weaknesses.

Android 21 is a wonderful character — it’s fun to play her, and she has quite effective tools to achieve many victories.

Thank you, Nitro, for this guide!

Guys, don’t miss another video by Nitro on DashFight — check out how to play Blue Goku in Dragon Ball FighterZ.

Want to learn from another super-strong NA player? Here is a guide on Kid Buu by LegendaryyPred.