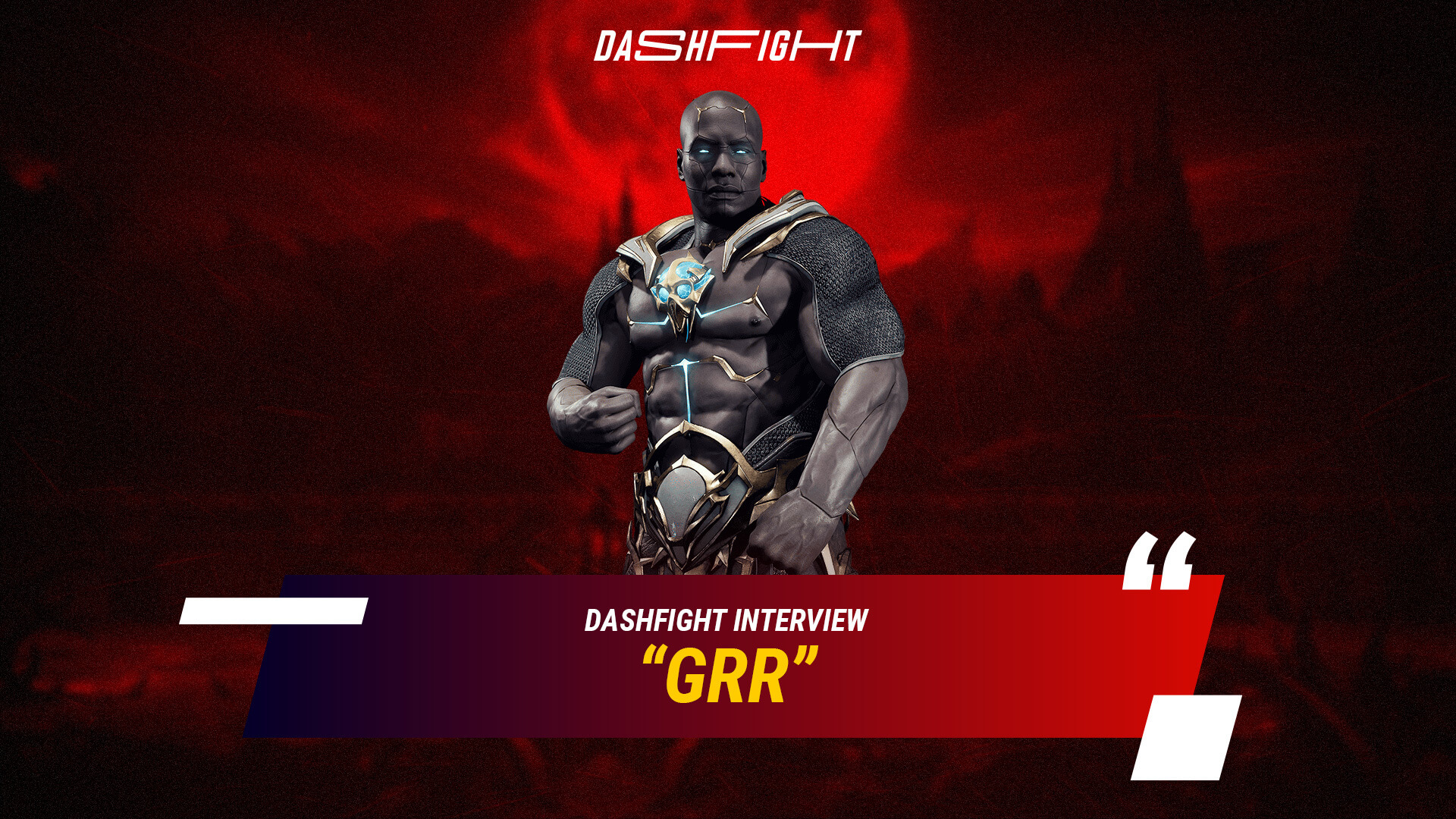 #Interview#WePlay Dragon Temple
He’s been playing Mortal Kombat 11 and Injustice 2 since 2017. It’s quite an experience and the basis for the bright future in fighting esports

Every player has their own story and their unique vision of fighting games. That’s why we at DashFight love so much to talk with professionals - such interviews significantly expand understanding of this awesome genre and give quite a lot of helpful info for everyone who enjoys fighting.

This time, we had a chat with George "Grr" Foulkes. He is an American player, who demonstrates excellent style on many esports events.

Without further ado, let’s start this very interesting conversation! The answers by George give a unique feeling of one’s path in fighting esports.

How it all started?

When you see a player at a tournament, you mostly think about their performance here and now. But what about that background story, the steps this person took to reach this point? This story is especially interesting for those who only dream about such a journey.

First, we asked George about the start of his career.

Well, I grew up playing video games for most of my childhood, and I started going to small tournaments for fighting games during 2011. I had a slow start in my rise and exposure to esports. it was 2017 when I was picked up by an esports organization that helped me travel to far distances to compete in large events. They've also helped me get opportunities to grow my brand and understand more of the professional esports world and market. I'm thankful to still be with my team, named Dynamik Focus.
I didn't really think or plan on how I would become known within the esports community or viewed as a pro player. It sort of just happened over the years of meeting wonderful people and improving my skill with each new fighting game release. I wasn't skillful at any fighting game for years but I've enjoyed playing them. It didn't come without its frustrations but I still continued on. I gravitated towards fighting games because of the competitive nature of them and how exciting it was to do cool special moves in a one-on-one setting. My interest in them grew into learning the strategic aspects of fighting games and understanding the competitive mindset. It just feels really good to have the confidence to practice a skill I worked hard for.

Who’s the mightiest of them all?

In a way, the primary fighter represents the player’s personality. It’s a kind of magic - to find your character and build your close relationship with them. Also, the beginners in fighting games often copy the choices of professionals - it gives some confidence to know that this fighter can win in hands of a pro.

So, who is the best MK11 character for Grr?

My favorite character in Mortal Kombat 11 is Geras. I play him because he fits my playstyle of a grappler archetype while also having unique abilities that set him apart from a traditional grappler. I also enjoy his character design which makes it enjoyable playing him. I do recommend him to beginners because he doesn't have a lot of moves to memorize but can still be very effective. The character tutorial in the game menu will explain a basic view of how to play him! If you're interested in intimidating your opponent up close and far away, and having strong power with easy to learn combos, then Geras is the character for you!

There are lots of situations in fighting games when you even stop your breath, wondering how this is even possible. What about 2020? Do you have something to remember?

George "Grr" Foulkes shares his esports excitement from this year:

One moment that sticks out to me was when I was watching SonicFox versus NinjaKilla during a live viewing of Final Kombat in March 2020. The player NinjaKilla executed a punishing move on SonicFox's character that was not thought of or seen before that moment in the match, it was very impressive and the crowd was excited for witnessing an effective and fast answer against one of the strongest Fighting Game players in the world. That entire set of matches was entertaining to watch and it's definitely not the last of good moments I'll see for Mortal Kombat 11.

Many things changed recently. We can’t attend big physical gatherings, so most of the esports tournaments moved to the online dimension. It’s a bummer for so many people - from fans to players.

We asked Grr about his personal experience of playing online only.

My last major offline event of 2020 was in March, it’s the Last Chance Qualifier for the Final tournament of the Pro Tour. The whole year felt really slow for me since I spent most of my months traveling to offline events to compete. So much that I've experienced traveling to these major events and conventions. Never thought I would enjoy traveling until I started doing this for the game I love. I really miss seeing different places, friends, stages, and the full experience of competing, it could never be matched with anything and I'm happy I've gotten to live through it before the current pandemic.
Thankfully Mortal Kombat 11's online netcode is very good to play and practice in. There's still a lot of opportunities to win good prizes and find good competition and players within the online community, even to find good players who weren't able to travel before the pandemic. So I'm grateful for something to fall back on while we wait until public offline events become safe and normal again.

Esports events consist of individual matches when some players fight each other. Then, the same guys play again in other tournaments, and then again, and again. It’s an interesting type of friendly competition.

Who is the toughest and who is the most interesting opponent for Grr?

I've faced many opponents throughout my years of competing but one player that is always difficult to fight against is Dragon, even though there were instances when I was able to be victorious over him, the amount of work and thinking required to outplay him can be very exhausting. One of the best defensive players in the Mortal Kombat scene, he always plans his sequences ahead and executes his attacks flawlessly. I find myself thinking outside the box and fighting the urge of falling into bad habits when fighting him, but that's how his playstyle affects you. It's like a hard wall that you're trying to break, or a game of chess where he's a few steps ahead of you. But I always want the chance to fight him because I still learn a lot from our fights and his hard work pushes me to do better with each fight.
As for a player that I dream to fight against, I'd really like to one day fight SonicFox in a grand final match for a tournament, to really feel that kind of high stakes pressure and test my wits and knowledge against them again and again. I've fought SonicFox before but I enjoy their mind and spirit when they compete, it's always nice to play them when we meet in the bracket.

Whenever we at DashFight have a chance to talk to a pro player, we ask for their advice for beginners. It’s not only because we want to improve our own playing style and get many victories but also because we want to share those professional secrets with you, guys. And here such advice from Grr is.

For people starting out in MK11, I highly, HIGHLY recommend going through the tutorial mode. This game's tutorial is very detailed and breaks down all of the mechanics and strategies within the system. There's a lot to learn but just picking a character you like and starting from there is helpful in maintaining your focus for improvement. There's a lot of tools and resources to help people understand their options when approaching a fighting game. Go on the streaming platform Twitch and watch pro players' streams and tournaments to learn about how people play and absorb the experience while not playing.
Another option is to find another player of your level or higher to play and train with them. That way, you can improve together and help each other understand the strategies and counters to them. I have someone like that during my time in esports that I'd play within my city and home. The player Coach Steve was a big part of my personal growth as a competitor since he's been an experienced player in the Fighting Game Community. There's a lot of ways to improve, and everyone learns differently at their own pace, but I recommend those steps for beginners of the game and for those who want to be familiar with the Fighting Game esports.

Stay in touch with Grr

After this conversation, we want to see George "Grr" Foulkes in action. Where? How?

I've been invited to participate in WePlay's Dragon Temple MK11 tournament in Kyiv, Ukraine. I'll be flown out to the country to compete within a custom-built arena made for this event and for their first huge fighting game tournament. I'll be one of the 14 players invited to fight for a prize pool of $60,000. This event will take place on the dates of December 10th to 13th.
If I'm honest, I was really surprised about this event and how much WePlay wants to give the best show possible with high stakes for the players to fight for. I was initially concerned with how risky traveling will be during this time of the year, but with research and assurance from WePlay's staff and partners, I feel more confident that I'll be safe traveling there and be there to play without putting myself and others in a high-risk setting. I really look forward to seeing how the arena is built and who else I'll be seeing in the tournament. I know most of the great players in our scene so I'm excited to see them in person again. I'm thankful WePlay chose Mortal Kombat 11 to be given a grand event for invited players to compete in. I want to put on a show for the rest of the world to watch, and give them a taste of what Mortal Kombat 11 and esports is all about!

We have more info on WePlay Dragon Temple here.

You can watch me train and play during my Twitch stream on twitch.tv/mr_grr

And look for videos of my tournament runs on Youtube on youtube.com/user/GrrFoulkes

There's also a lot of my public tournament matches on Youtube as well if you'd like to watch my matches within the years of esports!

Thank you, George, for your deep insightful answers! We will definitely be keeping an eye on the matches of this guy and we certainly recommend this to the whole MK11 community.

Would you like to check out our conversations with other prominent MK11 personalities? Then take a look at the interviews with Dubasik and Konqueror249!

For other interesting posts on Mortal Kombat 11 and fighting esports in general, stay tuned to DashFight on Twitter, Facebook, and Discord.