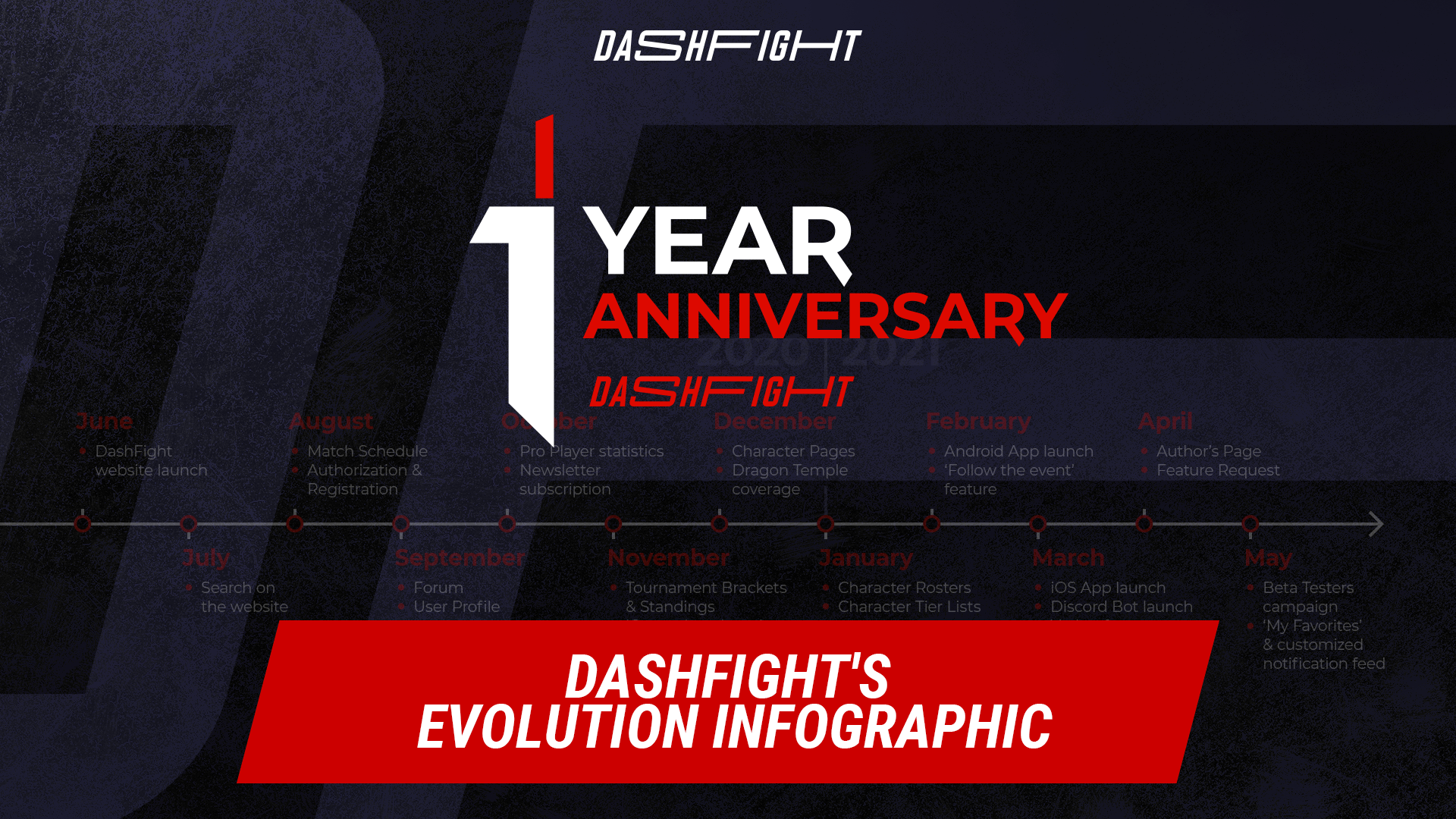 #DashFight
As the fighting game website turns one, we wanted to celebrate it and show what we've done through the year

June is a pretty special month. It marks the end of the first half of the year and carries with it a wistful longing for the second half which we all hope has all the good things we would love in life.

Besides, it was also on this month, one year ago, that DashFight was born. DashFight was born out of a love for the FGC and the desire to see it better represented in the outside world. For too long, the gaming landscape has been controlled by the MMORPGs and the likes, but it’s pleasing to see that fighting games are starting to get noticed too. Historically the hardest games to pick up, Fighting Games serve as the pinnacle of competitive excellence. Two players hone their skills through hours and hours of practice and put that to the test in a grueling match where they have to test their reflexes, speed of thought, and experience, to get a win over the opponent.

DashFight lives for the battle and that much is evident from all the work we have put into the space over the past 12 months. So, to celebrate this historic milestone, we thought it would be great to give a breakdown of what the DashFight team has done so far, and the achievements we’ve been able to unlock so far.

We kicked things off in June 2020 (smack in the middle of one of the most difficult times in world history), and the timeline went something like this:

Website launch. This was when the site was born. With only a handful of crewmates, we sought to make a dream come true, a dream where we could talk about the greatest genre of gaming and everything connected to it.

The search feature was added. Now, users could search for stuff all over the site.

Match schedules, authorization, and registration. At this point, we added the match schedule feature. Users could now see what matches were being played in their favorite tournaments and follow along. We also got registered!

Forum and user profiles. At this point, we really wanted to build a community. So, we got a forum started and created user profiles. This enabled users, fans, and admirers to have their own profiles on the site...or, like their own key to the house.

Pro player statistics and newsletter subscriptions. What are fighting games without the players who train for hours making themselves better? It was only fair to give users the information they needed on players by creating a resource that made locating statistics and the professional history of players a lot easier. We also added newsletters to communicate better with our burgeoning community.

Tournament Brackets, standings, and Guess the winner feature. We didn’t stop with matches; we also wanted to be able to provide information about tournament brackets and standings so that people would be able to keep track of how things were going for their favorite players.

Character pages and Dragon Temple. December was an especially exciting month as it featured the WePlay Dragon Temple, which at the time was one of the only tournaments that could even think of holding offline. Getting to cover that event exclusively was a huge deal and gave the entire team a real boost. In addition, we also added character pages giving users the option to read up on the lore game character and also their frequency of use by the world’s top players.

Character rosters and character tier lists. Tier lists have been the craze for the last year or so as players wanted to know where their players lay in the meta. We joined in the fun, creating tier lists based on objective criteria. We also created character rosters for all the games we cover.

Android app launch and ‘Follow the event’ feature. Everything is on mobile nowadays. Sure, anyone can access the site from their mobile device, but an app is the rational next step of evolution, and we got started on that process in February. We launched the Android app while also creating a feature that allows users to easily keep up with a tournament or event of their choice.

iOS app launch, Discord bot launch, Voting a new discipline, and WUFL S1 coverage. As you can see, March was insanely busy for everyone. We launched an iOS version of the app before facing Discord. Traditionally, DashFight has covered Street Fighter V, Tekken 7, Super Smash Bros Ultimate, and Mortal Kombat 11. However, we felt it was time to add another dimension to our multiverse and got our users to vote for a new game we could cover. In addition to all this, we also worked with the WePlay Ultimate Fighting League, covering the event and bringing users and fans up-to-date information about every aspect of the tournament.

Author’s page and Feature request. It wouldn’t be fair to let users have all the fun, would it? So, we created an author’s page so that our talented writers could also have a corner of the website to themselves—a place that was just for them and a way for everyone to get to know them. We also added the feature request option, which is a great way to involve the community in our continuing evolution.

In the last 12 months, we have also started striking up a couple of partnerships with prominent tournament organizers to cover their events and bring all the hard and fast action to members of the FGC. While the most prominent of the bunch so far has been WePlay Ultimate Fighting League and Dragon Temple, we have also partnered with some other entities. So far, we have partnered with:

Champions of the Realms II – Final

The FGC is an incredibly diverse community with each game having its own dedicated fanbase. There is some crossover, however, for the most part, fans like what they like. It is the same with their interaction with the website. So, if we were to split our users depending on their discipline, it would look something like this:

If you enjoy reading our content, then you are the ones we do all this for. A year is a long time in the life of a content creator, and you might be surprised by the breakdown of how much work has gone into the website in that time from an editorial standpoint. Our editorial team is a multi-layered cast of amazing people who put their heart and soul into their work. This isn’t only because they have a great work ethic, but also because they all just really love fighting games (Though they are absolutely horrendous players). That said, so far, we have

We’ve celebrated the awesome things we’ve been able to achieve so far, but more than that, more than all the new features, pieces of content, and event coverage, at the top of our MVP list will always be— you guys.

Yes, it’s cliche, it’s a tad mushy, but really, if there’s anything we’ve learned about in the past 12 months, especially with the world going as crazy as it has so far, it’s the power of community. We’re all linked by the bonds we share, thanks to the video games we love. Those bonds transcend geographical boundaries, beliefs, orientations, race, and every other thing that would normally divide people. So, with that said, all that’s left is to say a huge, intergalactic thank you to the guys who made all this happen...you guys.