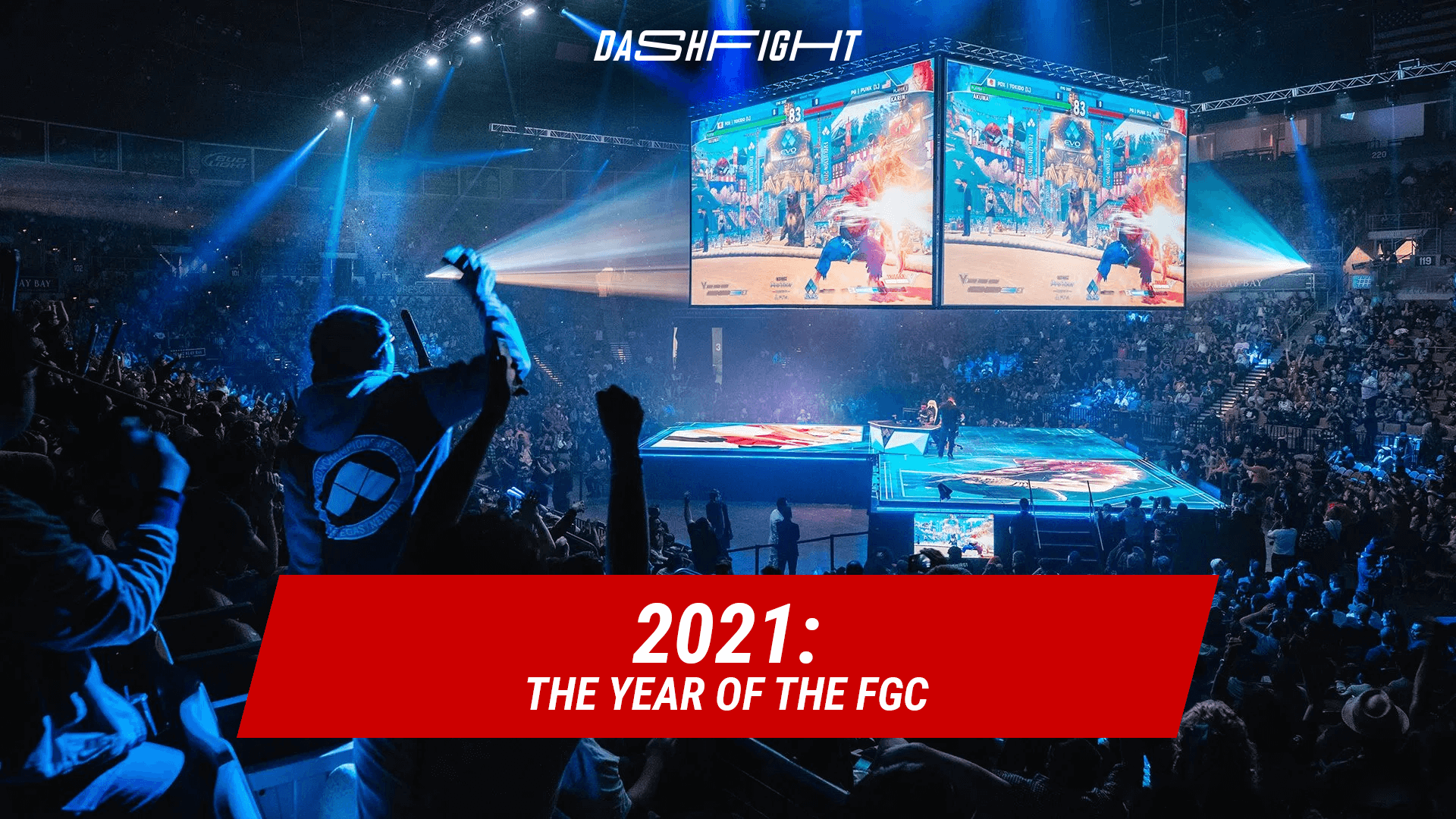 #Longread
After years of relative obscurity, the FGC is coming out in a big way in 2021

Following a slew of announcements, including the most recent one which is that Sony Interactive Entertainment has purchased the Evolution Championship Series, fans and members of the FGC have been left reeling. For too long, the FGC had been seen as something as the illegitimate stepchild of the esports world. Low prize pools, niche tournaments, and lack of sponsorship characterized the FGC. Now, the world is beginning to take notice and the FGC suddenly finds itself thrust into the limelight. The community now feels like a kid pushed to the stage with the eyes of the world on them. The blinding stage light might take some getting used to, but make no mistake, the FGC deserves every accolade it is getting today.

While esports had already gotten a start way back in 1972 with the Spacewar tournament, the FGC got a much later start. Fighting games had gained popularity in the 80s with the arcade scene bringing in the first set of pros. Naturally competitive, it wasn’t long before arguments broke about over who was the best player in the country, and by extension, the world.

This all culminated with a Street Fighter II tournament called Battle by the Bay which held in 1996. As many know, Battle by the bay has now morphed into what we call the Evolution Championships (or Evo). Initially focused on Street Fighter and Marvel vs games, the competition started to incorporate other games like Tekken, Soulcalibur, Mortal Kombat, and many more. At this time, prizes ranged from negligent to nonexistent. Many pro players found themselves spending more money to attend tournaments than they won from it.

While FGC esports grew more in the 2000s, they were majorly fuelled by passion and a dedicated fanbase. Meanwhile, traditional esports had already started producing global superstars and had started to really attract the notice of stakeholders.

For the longest time, it seemed like the FGC would be left behind, but as the 2010s onward showed, the resilience of the community started to pay dividends as first game developers, then huge companies started to pay more attention to the scene.

All of this has led to the current period where it seems the FGC is all anyone can talk about.

Okay, unless you have been living under a rock or are not a fan of fighting games, you must have heard about Sony Interactive Entertainment and RTS’ acquisition of the Evolution Championship series. The company will now be responsible for all future Evo events. Naturally, the feelings on this are mixed as while it means more money for the FGC, it could also mean that the scene will lose its grassroots feel. To mitigate this loss, Evo’s co-founders Tony and Tom Cannon will stay on board as advisors and it is hoped that this will at least mean that the competition won’t lose its identity.

The other big worry is what this means for the future of Super Smash Brothers Ultimate which is a Nintendo IP. According to IGN, Nintendo has responded saying they will assess the situation before giving a definitive answer.

Also, the Business developer for Evo, Mark Julio, stated in a tweet that Evo will continue to be open to all fighting games and that there isn’t a chance that it will become a means to promote Sony exclusive games.

This is not the only example of a huge company looking for a piece of the FGC pie. In December 2020, Microsoft announced the acquisition of the fighting game tournament platform, Smash.gg.

More recently, DAZN, a sports streaming service announced its partnership with WePlay Esports to stream its inaugural WUFL which will bring this festival of fighting games to viewers across over 200 countries.

All of this is accompanied by the announcement of the CPT 2021 schedule which for the first time ever will feature an African country.

All in all, it has been a ridiculous time for the FGC and with sponsorships, more prize money, we might be looking at a whole new chapter for the FGC.

Reasons behind the rapid growth of Fighting Games

There will probably be a few pieces that go into a deeper analysis of this, but, the simple answer to my mind is the fans. The FGC is without a doubt one of the most vocal and passionate fanbases in all of esports and the hype at fighting games can never be replicated elsewhere. The FGC has a raw, grassroots feeling honed over years of fierce competition. In that time, rivalries have emerged, friendships have evaporated, and legends have been born. At a time, Evo moment #37 was the most-viewed esports clip in the world and a cursory glance at the comments shows that even non-fighting game fans felt the hype of that moment.

In a world where esports coverage has become somewhat clinical, the FGC retains a rough edge that is irresistible and the entertainment value of this fact is not lost on the money bags looking to take advantage.

Is there a chance that the FGC will become so sanitized that it becomes unrecognizable from its humble beginnings? Yes. Will it be worth it? Well, that depends on who you ask. For instance, in an interview I conducted with Street Fighter pro player Ho Kun Xian, he was adamant that for FGC esports to become a viable source of income for players, sacrifices have to be made.

That said, as long as members of the FGC are still consulted, it is unlikely that the tournaments will be stripped of their identity.

Consequences for the esports future of the FGC

If there is one thing the FGC is missing, its the viability as a way of life for a majority of its professional players. Many tournaments still have incredibly low cash prizes and for the longest time, Capcom Cup was the only tournament that offered a truly competitive grand prize. More recently, WePlay Esports upped the game offering a prize pool of $60,000 for WePlay Dragon Temple which is pretty big within the FGC.

The increased interest of big companies in the FGC automatically means more money for events which hopefully should trickle down to the players. The more players can come into FGC esports with the hopes of making a living, the better it will be. This will mean stronger pros, more diverse scenes, and a never-ending pipeline of fresh talent.

While the FGC might take a long time to reach the heights of more mainstream esports titles in terms of prize pools, it can start to change the lives of the people who have supported it with theirs.

Depending on who you are, this might be a bit too much change for your liking, but the fact is that change is a constant and there is no way to escape it. What we can do, is keep using our voice to hold stakeholders accountable and ensure that we don’t lose the FGC we all love.

With all this excitement, 2021 promises to be an incredible year for the FGC in esports and to ensure you don't miss out of any further development, follow DashFight on any of our socials including Twitter, Facebook, and Discord.