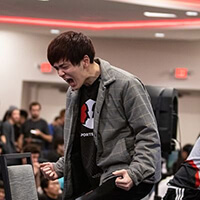 Isami Ikeda, also known as T, is a Japanese Super Smash Bros. Melee, Wii U, and Ultimate player from Tokyo who currently represents UYU. T is ranked 11th on the JAPAN Power Rankings and 49th at the PGR 100.

He has been hailed as the best Link ssbu player in the world and the best smash ultimate Young Link in his nation. T's debut international tournament was 2GGC: Civil War in 2017 for SSB Wii U when he ranked 3rd and received a prize worth $2,365.65.

Since then, Smash Tee has gone toe to toe with other top players like Abadango, Raito, and Shuton at tournaments like EVO Japan, Frostbite, Maesuma, Sumabato, Umebura, and Toryumon.