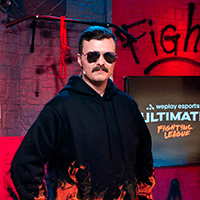 His main character in MK is Kotal Kahn.

You can check out his VODs on the official YouTube. and Twitch channels.