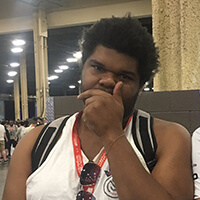 M2S BlackouT mains Erron Black in Mortal Kombat 11 andn is a Injustice 2 competitor. He also took part in several MKX tournaments back in the day.

As an MK11 player, M2S BlackouT notably reached 33rd place at EVO 2019. He's active in various local and online tournaments, such as Kombat Cup: Road to LCQ, Into the Shadows 4, Caged Vendetta's, The Kolosseum, Kombat Island, and The Nightmare Series among others.