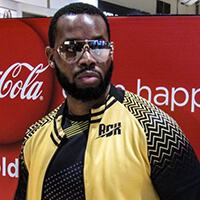 Ec_Rickman is a fighting game competitive player from Philadelphia, US.

Ec_Rickman notably appeared at EVO in 2018 and 2019 (reached top 100 in MK11), Combo Breaker 2019, Summer Jam 13, NEC 20, and lots of other local and online tournaments, such as Kombat Island, Caged Vendetta's, The Kolosseum, and Champions of the Realms.