Copied!
Learn more about the talented player in this exclusive DashFight interview

As the WePlay Dragon Temple has shown us, there is a wealth of talent in the competitive MK community. People the world overcame the WePlay Arena Kyiv to find out who was at the top of their form. Among the stellar competitors was Sedria "infinitii", a top-class player from the united states.

Some of the topics covered in the interview: 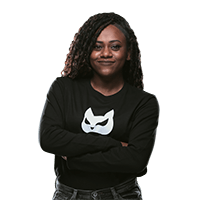