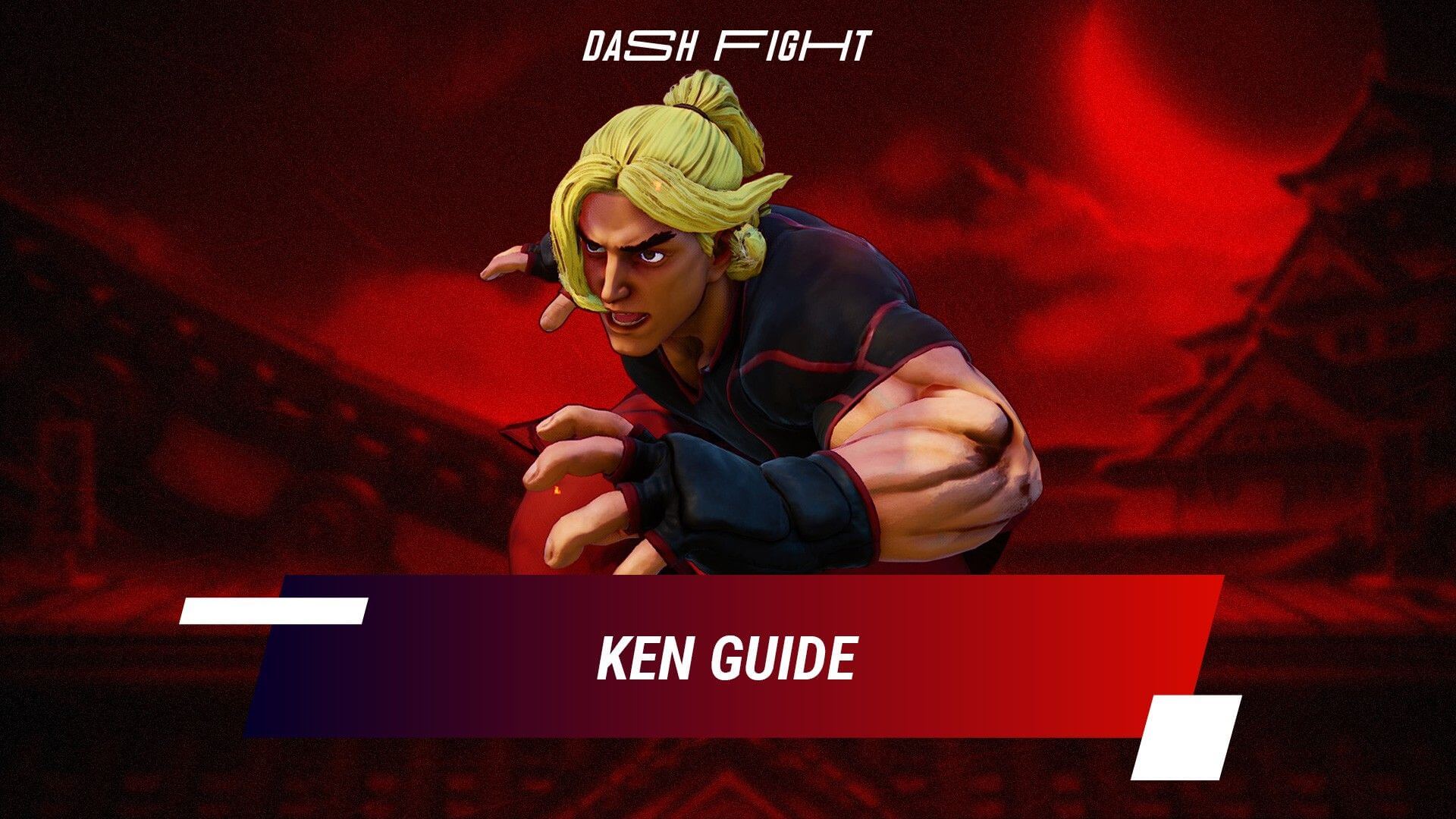 Capcom
The master of flames. His moveset, costumes, BGM and more of the

Ken Masters is the lifelong friend and rival of Street Fighter's main protagonist, Ryu. Learning the art of Ansatsuken by his best friend's side, Ken adopting a style of combat that's wholly his own and distinct from any of the other practitioners of the art.

In Street Fighter V, Ken elicits the aid of Ryu as he and the rest of the game's heroes try to foil M.Bison's plan for world domination. It features a considerable change in his appearance, which serves to differentiate him from Ryu even further.

As you'd expect, he's faster and flashier than Ryu, but his moves lack the strength and efficiency that his rivals have. The difference in between is a lot more than just that, though, as they not only feel different but play differently, with distinctive Normals, Uniques, and Critical Arts. Even their Ansatsuken Specials are very different.

It appears that Ken once more shares a stage with Alex in Street Fighter V. That's if you give him the New York stage due to the assumption that the owner of Café Eliza is his wife, on account of her name being the same.

The pair of blond-haired Americans both shared not just the stage but also the BGM that went with it, Jazzy NYC '99. In Street Fighter V Ken's theme returns to his roots, with Capcom remixing Ken's Street Fighter II theme. The new rock sound is heavy on drums and guitar, making it a great update for one of the genre's most iconic songs.

This costume is Ken's new look that has him wearing the top of his gi around his waist and a black training shirt with red lines underneath. He's also wearing black sparring gloves, his hair is in a topknot, and both feet have black ankle wraps.

Ken's story costume is his familiar gi from past Street Fighter titles. It depicts the American champion in his younger years and is the same outfit he wears in the game's tutorial when you first boot it up.

In this outfit, Ken is dressed casually in a jacket over a plain shirt and jeans to match. His hair is also cut short.

To celebrate the holiday season, Ken dressed up in what looks like a Santa outfit designed by Elvis. Much of his chest is exposed, and he's also got on a cape, hat, and dark shades to complete the bad boy ensemble.

This outfit was a part of the Capcom Pro Tour 2017 Premium Pass. According to Shadaloo's Captain Ashida, the costume is a red Masters Foundation tuxedo.

Fans of Devil May Cry will recognize this one as we see Ken dressed up as Dante, the main protagonist for most of the DMC series. It comes complete with a trusty sword in case there are demons to slay.

This costume is another collaboration piece, this time from Monster Hunter World. Ken wears an armor set made from the body parts of a Rathalos, a fierce wyvern that's got venomous claws and fiery breath.

Ken looks like he's dressed for the gym or a lazy day at home in this tracksuit. Considering he's wearing gloves, maybe he plans to get some training in.

Ken has some good Normals, like his crouching and standing LK and LP, which are fast tools that can apply pressure and link into combos. Crush Counters from HP and HK either launch or knockdown opponents, while jumping HP is a good option when dropping down.

His jumping HK is a great aerial; however, it is jumping MK that will be your go-to cross up. Ken's crouching HK will knockdown on hit but is unsafe on block, and like his crouching HP, Ken's standing HK can cancel into V-Skill. As good as they sound, some of his normals lack range and feel stubby.

Both of Ken's throws, Knee Bash and Hell Wheel, send opponents to a mid-range distance, setting them up for his footsies. His standing HK is an excellent followup to his Forward Grab, but for his Backward Grab, try Forward HK.

Ken's V-Trigger I requires three bars of his V-gauge to activate. Upon doing so, he dashes forward a short distance, gaining an increase to strength and a change to the trajectory of his Specials. His Hadoken becomes Shakunetsu Hadoken and can knock opponents down, while his Tatsumaki Senpukyaku travels farther and also nullifies projectiles. His Shoryuken also covers a considerable distance and gains the ability to juggle opponents.

His V-Trigger II see's the return of Shinryuken, Ken's special from some previous games. It has him perform a vertically ascending Shoryuken instead of the usual forward launching variation. Shinryuken also pulls in nearby opponents, adds flames to the attack, and can be powered up by tapping buttons. Each level of this V-Trigger makes it easier to link into other attacks like confirming into his Critical Art or Shoryuken.

Quick Step, Ken's V-Skill I has two variations. He either runs forward and kicks the opponent back or feints, opening them up for your next move. You can also cancel into his Normals, making this a great addition to his footsies game.

With this V-Skill Ken vaults forward in a wheel-like motion, knocking his leg into the opponent before landing him on his back. It's also safe on block unless blocked in mid-air and can be used to dodge various attacks like projectiles.

Holding down the buttons instead of tapping them will allow Ken to charge the attack briefly before execution. This increases the V-Skill's damage, stun, and gives him frame advantage on hit, allowing him to apply even more pressure.

Senpu Nataotoshi, Ken's V-Reversal uses one bar of his V-gauge and is a great escape option that gets him out of pressure. Ending with Ken in neutral, he can either launch his counterattack or try to put some distance between him and the opponent.

Thunder Kick is a powerful overhead that has a slow startup and must be blocked high. Holding the buttons will complete the attack while tapping them will lead to a feint. Depending on what your opponent is expecting, this is an excellent tool that adds Ken's mixup game.

This move is a faster but weaker version of the Thunder Kick that's just as effective. The ax kick leaves Ken on frame disadvantage on hit but is an excellent tool for creating space.

Chin Buster does more damage than Ken's regular MP and is one of his fastest moves. The punch has a short-range but makes up for this with its ability to link into a target combo on hit or lead into a Chin Buster 2nd.

This unique attack has Ken follow up his Chin Buster punch to the chest with an uppercut that sends the opponent up into the air. Put in a juggle state, Ken can then proceed with a combo extender or cancel into Specials.

The Target Combo Lion Breaker first hits the opponent with a roundhouse and then follows it up with a crescent kick that launches them into the air. The combo can be linked with Specials or his Critical Art,

Ken's projectiles don't have a stellar recovery, but they do travel at different speeds, determined by the strength of the attack button used. Mixing them up allows players to throw off their opponent's timing off, but his Hadoken is negative on block and isn't a good option for zoning unless your target is on the other end of the screen. They do make good combo extenders and can be canceled into V-Trigger.

Ken's dragon punch is a good option for pressing pokes with LP, while the MP variant is a pretty good anti-air and has invincible frames. HP travels farther and has more juggle potential, while the EX version does the most damage out of all four.

Ken's EX and HK hurricane kick are great combo finishers, while his LK version is speedy and links into HP Shoryuken. The MK version is a great option in combos thanks to how high he sends opponents. Ken's EX Tatsu's are hard to anti-air due to its speed, while his air-Tatsu's are great crossups, with each strength having a different number of spins.

The Guren Enjinkyaku is a combo finisher that is cancelable from his Hadoken and V-Trigger. However, it's damage doesn't increase while Heat Rush is active, and it doesn't scale up well in combos.

Ken is a fast mixup character with a good footsies game and an excellent toolset. He's able to deal considerable damage, has great ground control, a couple of overheads and anti-airs, with strong punish options.

Ken is weak at zoning due to his fireballs having poor recovery. His flashy style also emphasizes proper execution, further bolstering his high risk (high reward) playstyle. Some of his normals also lack decent range.

That's the end of our Street Fighter V Ken Guide, but you can also take a look at his lore page, combo guide and content for other characters too.