Interview with Thunder Studios and the PFRPA about Smash Bowl MMXXI 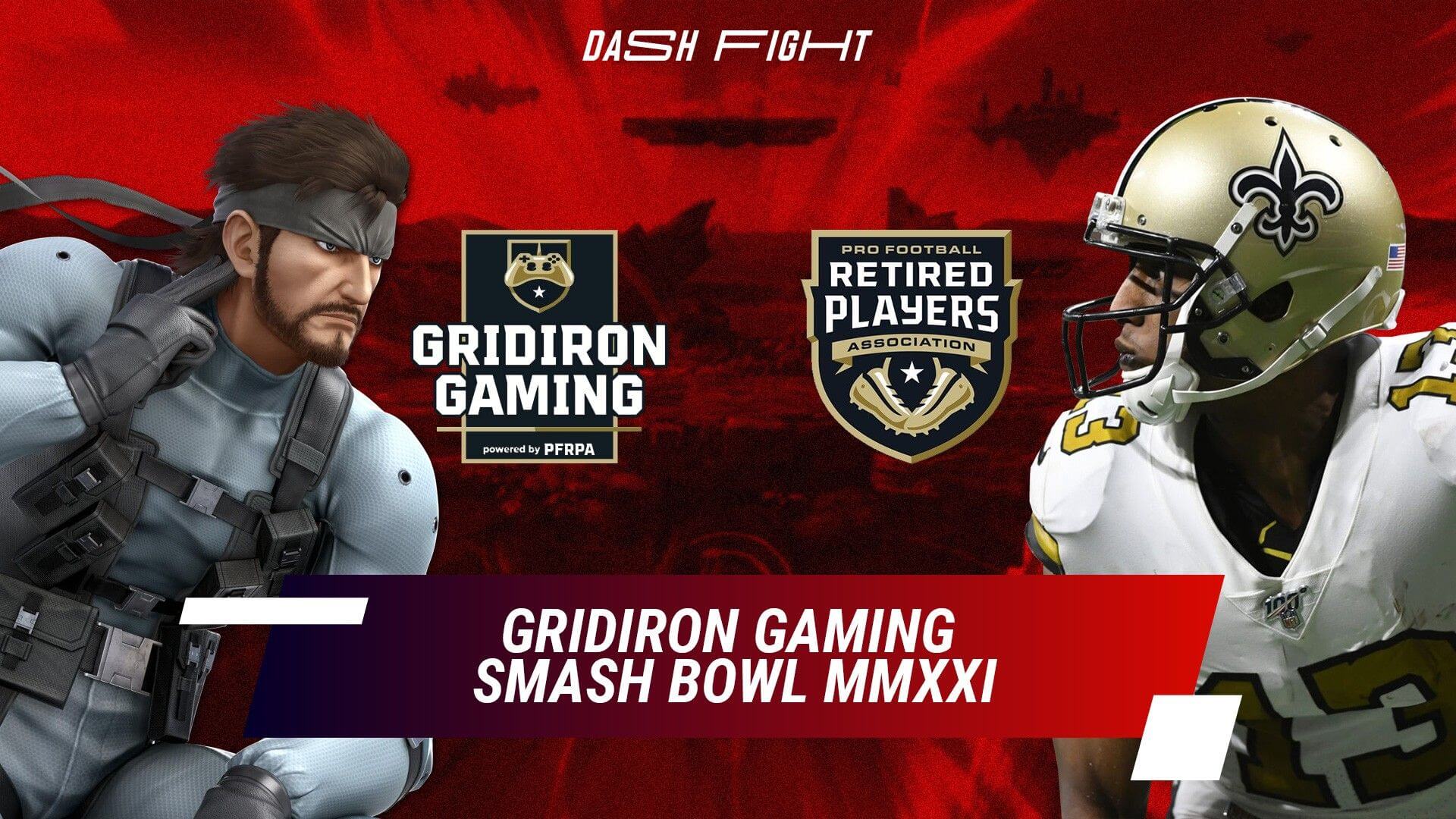 #Interview#Longread
Gridiron Gaming, the joint venture of Thunder Studios and the PFRPA will be hosting their first 2020 event, Smash Bowl MMXXI.

You would not be faulted for not knowing of Gridiron Gaming in 2020. The organization was founded recently, With only a prior event in Dallas in 2019. Gridiron Gaming is a project started by the Pro Football Retired Players Association (PFRPA). For Smash Bowl MMXXI, they partnered with Thunder Gaming, the esport oriented part of the much larger Thunder Studios, to assist in the production and planning for the event.

DashFight reached out to the organizers for a couple of questions ahead of the first event this Sunday. Speaking for the PFRPA is their Senior Director Joe Agbasi. Andrew Kennedy, the Chief Marketing Officer for Thunder Gaming is also present. But both are speaking about the Gridiron Gaming initiative.

The following interview has been edited and condensed for clarity – Originally conducted from October 24th to the 27th 2020.

Sebastian Quintanilla: When did the idea of Gridiron Gaming get started?

Joe Agbasi: At Pro Football Retired Players Association, we’re champions for retired NFL players. That means we’re consistently seeking out opportunities to create programs and benefits for our retired NFL players. Many of whom, grew up playing video games. If there's an opportunity that could be of interest to our membership, we have to give it serious attention.

In early 2019, we began developing our Gridiron Gaming initiative. We hosted a tournament in Dallas in June 2019, which was really a pilot to gauge interest. We generated a bit of excitement for that tournament, so we decided to pursue GridironGaming further. Fast forward to now, we’ve found a great partner in Thunder Studios, and we’re set to start our Smash Bowl MMXXI tournament on Nov. 1.

SQ: Who are the key individuals working behind the scenes to get Gridiron Gaming off the ground?

Joe Agbasi: Gridiron Gaming is powered by PFRPA and produced by Thunder Studios. It’s really a joint effort, and we’re working together to manage this tournament.

Andrew Kennedy: We have teamed up with a group of organizers, artists, and analysts who all have a rich understanding of the Smash community in order to make sure Gridiron Gaming’s first foray into the space is a memorable and exciting experience.

SQ: What can fans of esports, and more specifically Super Smash Bros, expect from Gridiron Gaming past January, when the Smash Bowl MMXXI ends?

Joe Agbasi: We’re getting involved for several reasons. We want to bring retired NFL and esports players together to connect, learn, and compete. We saw esports as an opportunity to offer our retired NFL players a chance to compete, but also to be part of something larger again. We also want to provide great events for the different esports communities out there. If we can offer up fun, positive tournaments where players and fans can come together, we’re headed in the right direction.

SQ: Esports is very much a young people industry, what qualities does this demographic have that make it worth the effort to establish a presence in it?

Andrew Kennedy: Millennials and Zoomers, more so than their older counterparts, are more connected than ever before. When one person is playing a game or watching a show, we know about it. And if we know our friends like content, we’ll consume that content too. These network effects are totally passive and require no extra advertising on the part of brands or companies. These network effects are even stronger when people are actively taking the step to share these experiences with their social circles, letting customers market on your behalf.

SQ: The PFRPA takes in donations, can you tell me and the readers a bit more about that?

Joe Agbasi: Under PFRPA, the Greater Good Fund, which is our 501 (c)(3) charitable foundation, is developing health, welfare, and educational programs for retired NFL players. Our foundation accepts donations that go towards the creation and maintenance of programs and benefits. Currently, we offer dental and vision insurance to our members that retired from the NFL prior to 2013. We’ll be launching a social media workshop in January 2021 for all of our members.

SQ: What would be the expectations with the Smash Bowl MMXXI in terms of viewership and audience engagement?

Andrew Kennedy: Smash Bowl combines a lot of different things that we’re hoping will engage key demographics. Obviously, Super Smash Bros is a very popular series with video game enthusiasts, and by recruiting players that we know are interesting to watch, we’re hoping fans of the competitive scene will tune in to see how their favorites can adapt. By stepping outside the established boundaries of competitive play, we’re hoping to also get the attention of Smash players who don’t normally watch Ultimate, as well as more casual players who often find the most fun part of the games removed from high-level competitive play.

SQ: You've partnered with Thunder Gaming for the event, can you tell me more details about the partnership?

Joe Agbasi: We partnered with Thunder Studios and Thunder Gaming to help develop, strategize, and manage our Gridiron Gaming brand. We announced our partnership back in late August, and Smash Bowl MMXXI will be our first tournament together.

SQ: The event has a pretty unique and interesting format, who came up with it? and how was it constructed?

Andrew Kennedy: The format was originally designed by Justin “paperfairy” Duncan-Mills, a grassroots fighting game tournament director. He brought in Andrew “PracticalTAS” Nestico, Kyle “Grayola” Gray, and Ryan “L4st” Krichbuam in order to help iron out the details and craft some of the rulesets that will be utilized. The online invitational event format and ruleset’s goal is to provide unique, engaging, and interesting Ultimate play for both viewers and spectators.

SQ: Were there any players that chose to not participate in the event after being invited?

Andrew Kennedy: We’re lucky that we got a bit of excitement from the onset. We invited top Smash competitors, including some of the highest-ranking players, and there has been a lot of positive feedback from both the players and fans. We wanted to create a unique tournament that would be fun and engaging for the Smash community, and we're delighted that the vision came together.

SQ: Would it be fair to say that Smash Bowl MMXXI is more of an "all-stars" event than a "Super Bowl"?

Andrew Kennedy: We definitely do want to find the best [player]. Each tournament will be a little bit different. In Smash Bowl MMXXI, we chose to invite the best Smash players, but we will also have our retired players engaging throughout the tournament. With each tournament employing its own strategy, invitational or open, we have flexibility with the format.

SQ: Any plans for Open events in the future? or are Gridiron Gaming events going to primarily be invitationals?

Joe Agbasi: Each tournament we offer will have its own strategy, and it really depends on how we decide to set each up. The best I can say is to stay tuned to continue to see what Gridiron Gaming has to offer.

Safe to say, the future bodes well for the Gridiron initiative if this first event in the Smash community goes well, which very much looks like it will. If you want to stay up to date with how Smash Bowl MMXXI develops, consider following DashFight Facebook and Twitter or join our Discord server. That way you can get up to date information on how the event unfolds in the coming months!