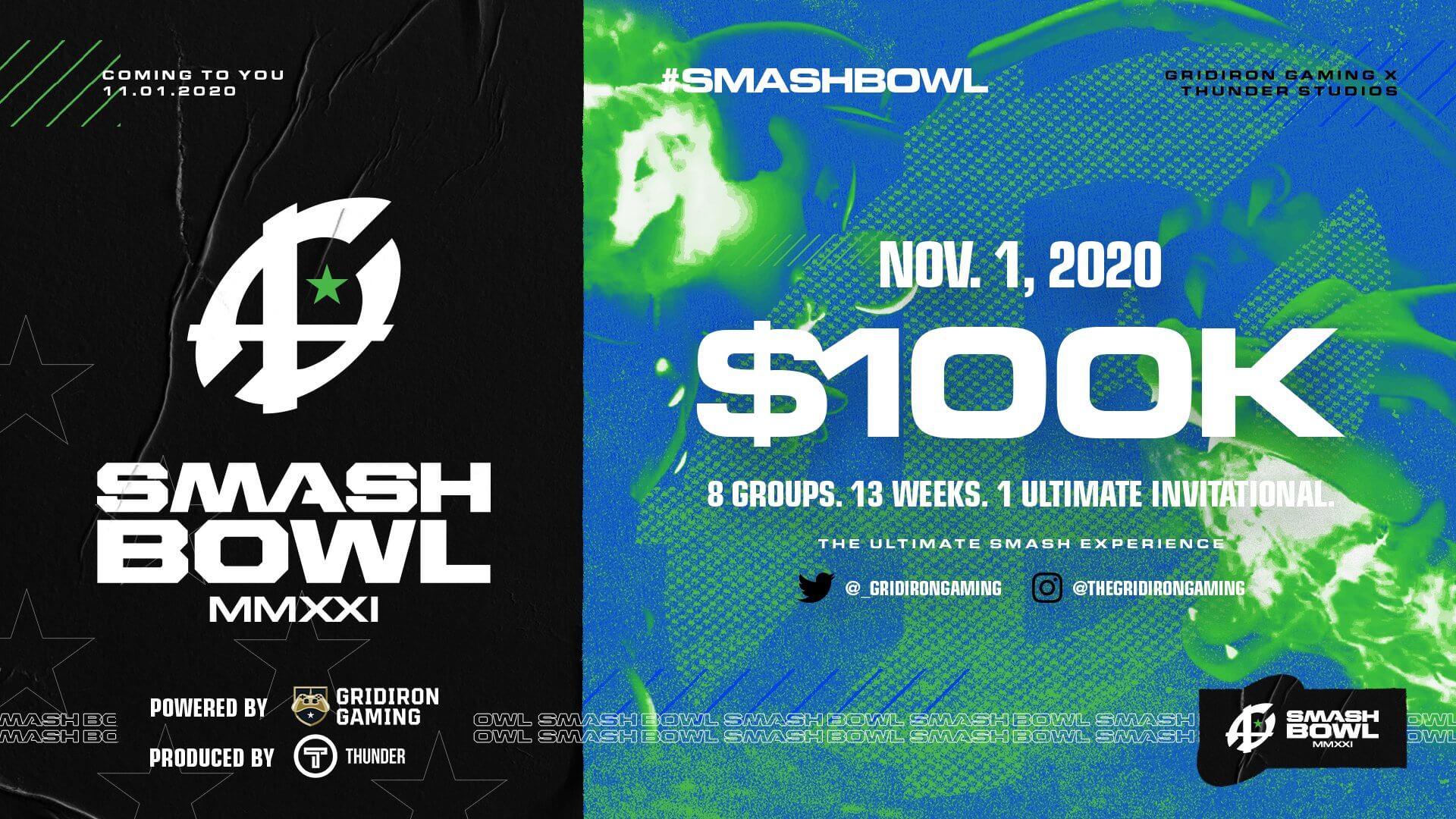 On Tuesday, Gridiron Gaming announced a three months-long event that pitches 32 top Super Smash Bros Ultimate Players against each other. The event's production is also being handled by Thunder Gaming. They host various events on location in Los Angeles along with other production and event services. The event is also being powered by the PFRPA, a retired player association for NFL players.  Smash Bowl MMXXI will have a 100k USD total prize pool slip across various events starting in November and ending in January.

Gridiron Gaming has begun showcasing each player individually with a new tweet every day. But the full list of players is already available on the tournament's Smash.gg page. The 32 lucky invited players are:

For the first stage of the event, 32 competitors will be seeded into eight groups of four players. Each group then goes through a process of banning rulesets from a list of 16 until 4 remains. Then 1 rule is randomly selected and used for that group's double-elimination best-of-five bracket. Two players, the winner and the runner-up will move on to the second stage.

Each group will play the full bracket on the weekend. Starting on Sunday, November 1st, and running every Sunday until December 30th. Players will receive $500 USD for playing, as well as $250 USD for each set won and a bonus of another $250 USD for not losing a single set all stage.

In this stage, the eight winners from the previous section, now called "captains",  will be split into four groups with two captains each, and then select each will select a runnerup from the previous stage. Players will then set off into another double-elimination best-of-five bracket. And once again, the winners and runner-ups from each group will move on to the final stage.

This second stage will begin a few days into 2021, on January 3rd, and run for four weekends until the 24th. Once again competitors will receive $500 USD for playing, as well as $250 USD for each set won and a bonus of another $250 USD for not losing a single set.

For the final stage of the competition, which is on January 31st, the winners from stage two will pick a runner-up from the previous stage to face off against in round one of a single-elimination bracket. All matches, unless specified by the ruleset selected, are best-of-seven. When it comes to ruleset selection the higher seed will pick whichever of the 16 rulesets they want to play. The lower seed can then veto it up to three times. For the Semis and Grand finals, the standard competitive rules will be added to the pool of possible choices.

As mentioned before. There is a list of 16 rulesets that will be played throughout the whole event. Some are mostly normal modes with slight twists, like the Nearly Legal rules. Others, not so much. “Switch” To Rivals, for instance, sees players literally switching games to play Rivals of Aether. You can check out the list of all the rulesets below. And if you want to read over the details for the whole event you can go to the official rulebook.

For more news on Super Smash Bros Ultimate and other Fighting games, you can follow us on Facebook and Twitter or join our special Discord server to meet other players from the fighting games community.