How To Treat Your Community With hotrodkrusher 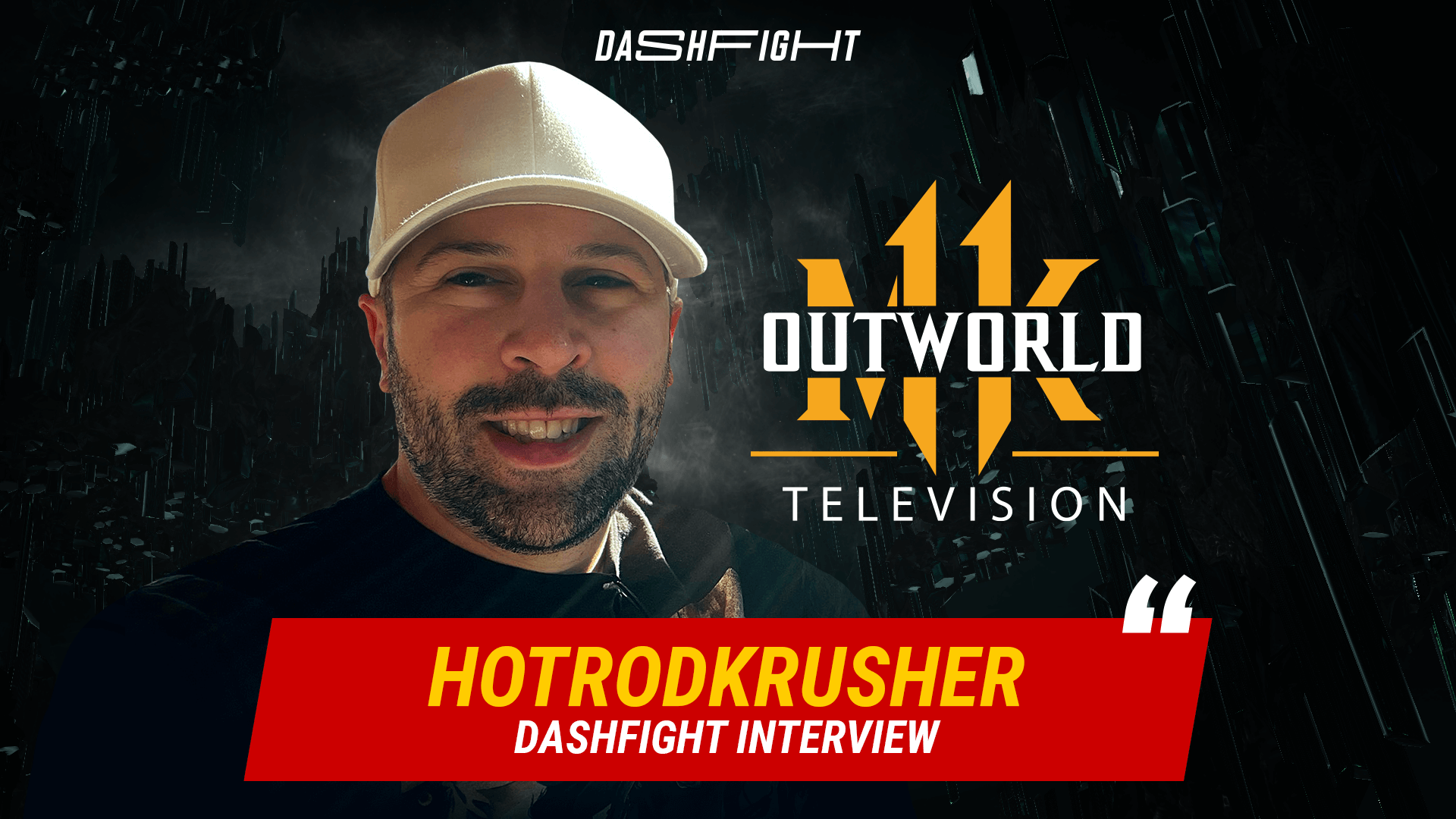 #Interview
A brief chat about Outworld Television, its community, and everything related to its success with its creator, hotrodkrusher

Over almost two years, the COVID-19 pandemic has been affecting everybody’s lives in various ways. Of course, it’s also applying for the fighting game community, as a lot of big events have been canceled or moved online. However, there is also a kind of bright side in it since some talented and passionate people embraced the opportunity and managed to create something really special to keep the players busy and the community entertained. One of such projects stands tall among the others with a top-level production, significant money prizes, and a world-class level of competition. Imagine seen such players as Tweedy, Biohazard, TheMightyUnjust, KingGambler, and Grr all in one Top 8 bracket. No, this is not an Evolution play-off; this is Outworld Television - a weekly online tournament, where players with any skill level can compete to earn their place among the best in the season finals. And today, we have a chat with a founder, host, and producer of this well-known and one of the most entertaining online tournaments in North America - hotrodkrusher himself.

First, let us talk about the Outworld Television project itself. In its current state, it’s one of the most enthralling series of events in North America, with constant top-level competition week after week.

Is it all your work and only yours from the start, or is there some kind of a team behind the curtains?

Thank you for portraying Outworld Television in such a great light with that description! I am the only one who hosts the events, produces them, and does the matchmaking across the fighters since day one 14+ months ago. However, so much of the community’s valuable input and suggestions have been present since day one. We take all that into consideration and implement what makes sense regularly, hopefully improving the experience for everyone with every season.

How was the whole idea of Outworld Television born and realized in such a successful way?

The idea at the start was never this grand plan and system that it is today. In the beginning, there was a group of us who were regular sparring partners. Many of us competed in online events regularly and were bored one day when there were no events to participate in. So we decided to start our own. It was the most unorganized, unnecessarily long tournament anyone has probably ever experienced. But that first tournament we put on (before Season one) showed me there was a ton of potential. So I thought about it for almost 6 months before pulling the trigger. Talked it over with my wife and decided to make it more organized and an experience that would only get better with time.

What do you think is the reason why Outworld Television became so popular and entertaining, besides top-level Mortal Kombat?

Outside of putting on great matches, I strongly believe the reason Outworld Television is so popular and remains today one of the top/most watched NA events for Mortal Kombat (and now Injustice Television the same) is because a whole lot more people don’t realize, I bring 20+ years of organizational and management experience from my business background right into these events. I respect the player’s time and treat them very professionally behind the scenes with bookings, matchmaking, promoting them, and more. Every interaction with the players is with care and my best to give them all the undivided attention I can. Outside of that, we are consistent in our broadcast/schedule. Same days and times four times a week every week, no weeks off for 14+ months adds to the viewership. My experience in web design/graphic design, etc., allows me to produce the events without outsourcing the work, making my time for the events better spent/more efficient. Honestly, I don’t want to bore you with the details, but this list can go on and on and on. The point I’m trying to make is that, although it looks like it’s just high-level matches attributing to our popularity and consistency, there is a whole lot more on the business end and behind the scenes aspect of it all that really contributes significantly as well.

It might be as well your charismatic style of hosting the events, the ability to be one with the crowd, don’t you think?

I also believe a charismatic style/personality that’s genuine does also add another reason this channel is so popular. That is who I am on the big screen and in real life. I’ve always been enthusiastic, excited, and passionate about the things I do in all my work and with others. I’m not saying others have to do that and emulate that style because I don’t recommend anyone trying to be something they aren’t. But that style is electric and contagious, and I’m just blessed that’s the type of person I am because others feel that and can relate to it.

There is currently Season X of Outworld Television ongoing, the first season of Injustice Television successfully finished, and Outworld Television EU revealed. And all this just in a bit more than a year. Hotrod’s enthusiasm can only be envied, as well as his time management. There are four events for each Television season every week, not to mention all the preparations and production stuff.

Does your family support you? How did they react to the whole OWTV idea?

My wife and kids were the first people I told about these plans for Outworld Television and the other games/regions. With their support and love, I am extremely blessed and thankful and honestly believe we wouldn’t be here today 14+ months later without them, especially my wife who trusts and believes in me and my vision. They share similar excitement and passion in much smaller doses.

By the way, your nickname must be a reference to modified old-school American cars. Maybe you have a hobby related to this in any way?

The name does play on hotrods in that they are fast and burning with fire, but not because that is a hobby of mine. More of a metaphor coupled with the word crusher; that I’m set on my goals and passions with a fast, driven, relentless commitment to see them through. The “k” was for the Mortal Kombat, of course.

You were posting something about watching the Attack on Titan anime series. Do you enjoy Japanese animation in general? Can you highlight some of your favorite titles?

Big thanks to Tweedy and Mikasa (one of our mods on Outworld Television) for getting me into Attack on Titan. That and Death Note are my favorites. I am trying to get started/finish Full Metal Alchemist next, but work keeps getting in the way. Those are the only two I’ve seen so far, and I love them. Excited to experience more.

Speaking of Outworld Television EU. It’s great to know that OWTV is expanding its horizons, especially since the EU competitive scene has a lot to offer. Its community is rich with high-level players and well-known old-timers and historians like Ketchup and Mustard, HBTWarrior, and others, with a lot of young and passionate stars rising constantly over the last years.

Outworld EU is going to have the same structure as the original one, or you’re getting ready something special for the new region?

The plan for Outworld EU is to bring the same events NA players and viewers experience to the EU region. It will run the same way with qualifier events four times a week every week, no weeks off, season after season after season. As long as the support is there, we will keep it going.

Can you highlight a person or two from the European MK community?

VLJV has been so helpful in aiding us to learn about the EU region, along with Masher, who’s been trying to get us over there for over a year. Over the past 14+ months, I have had the chance to watch some players and get to chit-chat with them here and there like LawKorridor, Heurisim, and so many others. And I’ve always been a huge fan of Ketchup and Mustard way before Outworld Television existed, and they are a big reason why I’m even commentating today.

NetherRealm, not so long ago, announced that Mortal Kombat 11 is not going to be supported with any kind of content or patches anymore. Compared to other most popular fighting games like Street Fighter V or Tekken 7, MK11’s lifetime was quite short.

What was your first impression after such news?

I was sad but knew we had built a great community for over a year and had no plans of immediately stopping.

Is it affecting Outworld Television somehow?

Maybe you have something on your personal wishlist for the next MK game?

I am happy with whoever the devs decide to put in because I understand the work and time they pour into it. But it would be awesome to see Reptile, Smoke, Ermac, and the cyborgs Sektor and Cyrax back.

What are your plans for Outworld Television? Besides the announced EU spin-off we talked about earlier.

The plans for Outworld Television after EU hopefully goes according to plan is to keep that as the channel for the latest Mortal Kombat release. That means qualifiers and seasons forever and ever as long as we can keep it going with the newest MK release replacing the existing one. For example, MK12 replacing MK11 on to OWTV MK13 replacing MK12, etc.

If you had the ability to improve MK11 in any way, what would you change first?

Wi-Fi filter that doesn’t allow you to be matched up with Wi-Fi players when searching for matches online.

If there were any other popular fighting game franchises to cover on the Outworld Television, besides NetherRealm titles, which would you pick?

Outworld would only be MK, just like IJTV (Injustice Television) will only be Injustice. We are planning on other channels for more television series qualifiers like Killer Instinct, Street Fighter, and Tekken after Outworld EU settles in.

Do you enjoy other video games outside fighting game titles?

For the past few years, I’ve only played Mortal Kombat and Injustice. I’m really only into fighting games. Many years ago, before that, I enjoyed the Uncharted series from Naughty Dog.

With these noteworthy words, we're about to wrap up our sweet chat with hotrodkrusher. Be sure to check out the official Twitter accounts of Outworld Television and Injustice Television, as well as its website. And to witness the highest level MK and Injustice matches several times a week, tune in to Outworld and Injustice Television Twitch channels. And don't forget, that one day it might be you who will be fighting their way to the season final on stream!

Also, you can subscribe to the Outworld Television tournament page here on DashFight as we're covering each season final's statistics live, as well as updating matches, player's profiles, and many many more.