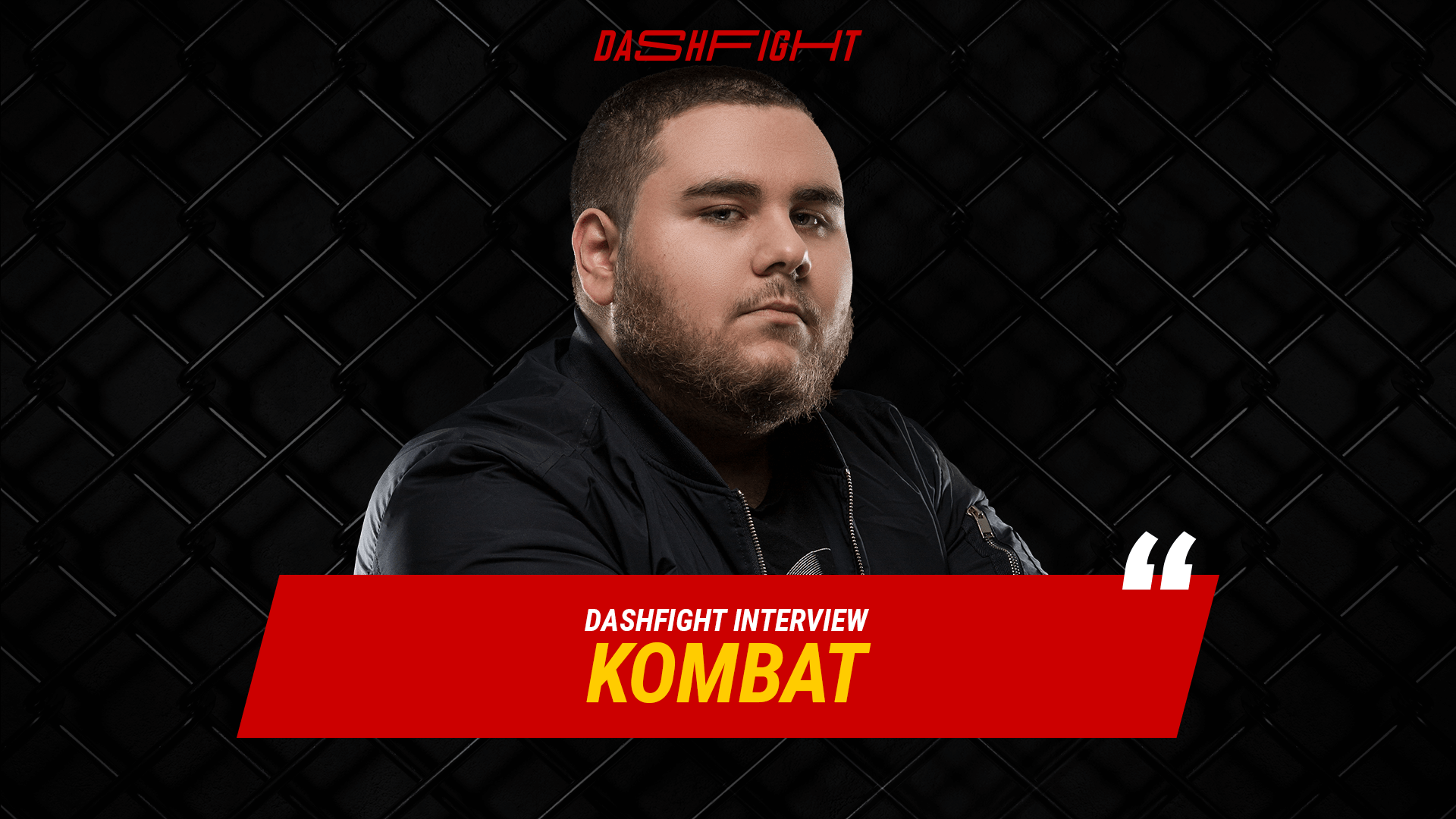 #Interview#WUFL#Longread
Coming back after the break, down to earth thoughts about the future, and family support

WePlay Ultimate Fighting League Season 1 starts today, and one of the participants of Group A is a player who's coming back after a lengthy break. We spoke with Zoulfikar "Kombat" Dayekh about the struggle of coming back to the offline environment after a year of playing online, his future goals, keeping his sight set on winning, and support from his friends and family.

Hello. Recently you’ve stated that you had a competitive break last year. How did you prepare for the tournament as big as this after the break?

Hi. Preparation just comes naturally. Once you find out who's going, you get a sense of what you have to prepare for. I found out the players a week before the event. In terms of preparation, you just play your characters well and make sure, even if you don't know who's going, to know your matchups. Even if you haven't played in a while, you got to get your feel back when you're playing. And for me, it's not the game that's hard to come back to, it's every little thing in every matchup. That's what you have to come back to. So I've been trying to do that. And I'm getting close. We have one more day, so I have to play, but I feel like I'm close to where I was before. Did you still play the game while being on a break? Not competitively, but casually.  The last thing I played in was an NA East Week 2 for ESL, and after that, I literally didn't open the game for a month. I was just playing games NBA. I started playing For Honor again. I just took like a long break from it, I didn't touch it. After a month, I did get on it for five minutes, just to see if I can hit a combo. I was able to, so I knew that some of the skill is still there. And then that's when I got the WePlay invitation. And then I started playing a lot again. For Honor became my new fighting game. But with MK, no, it wasn't on and off, I actually did not open it for a month.

What kind of a break was it for you? Just to rest and chill?

It was a break just because I didn't have a passion for playing. I didn't want to play. Every time I see the game, I tell myself, "I'm gonna play a match." But in my head, I thought, "Why am I playing? There's no reason. There's nothing to play for." I also had to focus on what college I was going to. So I spent researching college majors the whole month. I found my major. I picked my college. Now is my time to unwind and start playing again before I get too busy with college around June. That's why I started playing again. And WePlay has an event, so I want to make some money as well.

What college did you pick? What's the major?

It's in the New York area – Kingsborough Community College. I chose to do exercise science. I'll be honest, it's not a major I want to do. But if you look at all the college majors, you have finance, business, medical - none of those really interested me. I know I do have to go to college because that's how you get a future. You could do it off the games, but it's very rare. You only see a few people do it. Like SonicFox, obviously, they're with Evil Geniuses. They've won like a hundred tournaments. Scar is another player, he has a sponsor. But you see, it's very limited on who can actually make a living off of this. And that's if you want to because let's say you lose your passion for the game. What are you gonna do there? That's why I picked the college just to make sure I have something for my future. To go with the safe option.

How hard is it to switch from an online environment to an offline tournament?

I found it really hard, actually. I didn't expect it to be that hard, but I found myself not being able to hit combos. It's weird. And I dropped a lot of things. Yesterday I played for four hours, and I realized I can't do that. I got to the point where I was losing just because I didn't want to play. The reason why I took a break in the first place just came back. So today I just played the Bo7 with Rewind, and I felt when I was playing better, way better. So I realized that I had to keep it limited. Offline is, I can't really describe the feeling because I haven't played a lot of people, but it definitely feels different. Some of the buttons you throw, you definitely feel like you could die way easier after whiffing a button than you would online. But in terms of that, I just need to get my execution better. It definitely is a different feel. And I do enjoy offline more. I have to adjust to it better. It was a bit weird because it's been a year. I've been in my own house, playing online for a year and a half or so. Here, if I get hit by something, I can just look over and they're laughing. But I just want to be offline to see everyone. I just need to get my execution up. Because right now I suck. Do you consider this your full comeback to the scene? What are your plans for the future? Realistically speaking, let's be honest, everyone would like to play games and make a living off of them. You wake up, you play whatever you love to play, and you make a living, and you make a lot of money. But our scene doesn't have a lot of money. I'll be honest, our prize pools aren't that big. In Dota 2 you have people winning $6 million. The max for us is $40,000. It's still a lot of money, but compare 40,000 to 6 million. SonicFox won $40,000 last year at Final Kombat. I love the prize pool at this event. It's $15,000 for first, $10,000 for second, then $8,000, $6,000, 3.500, and then you get $2,000 just for making top eight. That's a really good split. It's just when you compare the money to the other games like Dota and CoD, you have people earning $6 million. That's why I feel like if you want to make a living off of it, you need a sponsor, you need a salary, you need tournaments. And then you can make a living off of it like SonicFox. They probably have a lot of money from this. They won like 200 tournaments. Then there is Rewind, he has you UYU, I'm sure they support him financially. Scar has a really good sponsor. I'd love to make a living off it. But like I said, I'm going to college. If this ever works out for me, and I can, I'll make a decision at that point, if I want to continue college or not. But in terms of if I want to do it, yes, I'd love to do it, 100%. If I had the opportunity, I'd do it instantly. But you know, it's very hard. If this doesn't work, I have college. If this does work, I still have college. And then from there, I'll make the decision if I still want to pursue my major, or if I want to pursue this. But we'll see from there.

You’ve proven in the past that on your day, you can beat virtually anyone. You've mentioned that you're getting there? How high is your confidence level?

I definitely think I can be everyone right now. Because I've gone back to how I was playing. There are only a few things that I'm trying to get better at. On a scale of 1 to 100, I'd say I'm at 90-95. It's not that hard to get back into it once you've taken a break. It's just the little things you need to polish. Cetrion is a very talked-about character right now. Something as simple as flawless blocking her tornado - that matters a lot. And if I'm not doing it consistently, I'll lose the matchup just like that. I'm not worried about my skill and how I play. My worry is if I can execute correctly the game plan I have. Because I have had nerves in the past when I play. At the Final Kombat last year, I had no nerves at all. None. And I got fifth. I could have gotten better but it happens. No nerves, so I played really well. And if that happens at this tournament, I think I could win. But if I get nervous, or if I'm not playing to my best ability, I'll lose. Everyone is a tough opponent, they're at the top of their game right now. So it's just nerves. If they're not there, then I feel I can win.

Any final words you’d like to address to anyone?

Shout out to my family, most importantly. When I first started playing my family was like, "What are you doing? You're spending four hours playing random things." But once I started making money, they understood. Then my brother started asking me for stuff. Once I started travelling, they allowed me. They realized I could make money off of this. I don't come from a really wealthy family, so I don't ask for a lot of money. I barely ask for any money from my mom. I basically made all my money off of tournaments. They've supported me, even my brother. He wished me luck earlier today to win tomorrow. We'll see if it happens. To all my friends, I appreciate you for supporting my streams. I haven't been streaming a lot, but whenever I do, they show up. I appreciate that. Everyone who's rooting for me: I appreciate y'all. And all my New York friends - I miss you all. Hopefully, the locals come back when this pandemic is over so we can play again. I appreciate everyone and hopefully, I could win this weekend.

Thank you very much. Good luck!