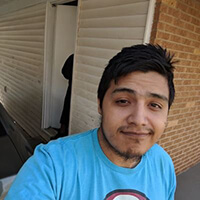 Walmart appeared at Kumite in Tennessee 2017 and performed in three disciplines at once (Street Fighter V, King of Fighters 14, Ultimate Marvel vs Capcom 3). Since then he visited this event every year, and many others like Combo Breaker 2018 and Final Round 2019, and almost every time he competed in more than one discipline. At Kumite in Tennessee 2020 he played Street Fighter V, BlazBlue Cross Tag and Samurai Shodown.