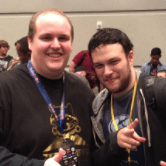 Spabobin is an esports competitor from Memphis, Texas, USA. His main discipline is Street Fighter V, in which he uses Ibuki as his main.

Spabobin began his career in September 2016, at Road to SCR 2 (SFV singles), where he took the 33rd place playing Cammy. She remained Spabobin's main up until October 2017, when he took part in Capcom Pro Tour Online 2017 North America Event 4 with Ibuki. In this event, he fell short of only one victory to enter top 16 players, with 70% win rate.