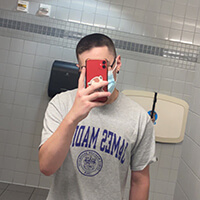 Shane "Primid" Michaelson is a Smash Ultimate and former Smash 4 competitor from the United States. He's a Fox main player.