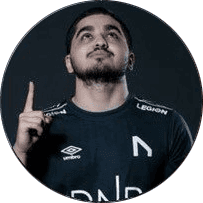 Arman “Phenom” Hanjani is a Street Fighter player from Norway.

Phenom started playing Street Fighter on a professional level since Street Fighter IV with M.Bison as his main character and achieved a 3rd place at the DreamHack Winter 2015 tournament as his most significant result.

In Street Fighter V, Phenom started to co-main Necalli alongside M.Bison and achieved a big victory over Fuudo in the Grand Final of DreamHack Summer 2016 and became a runner-up at the ELEAGUE Street Fighter V Invitational 2017, losing to Victor "Punk" Woodley, another well-known young professional. In 2019, when Karin was also added to his active roster of characters as he ranked 3rd place at Capcom Cup, losing twice to Derek "iDom" Ruffin.