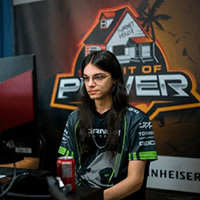 Derek "Nakkiel" Bruscas is a former professional fighting game player from the United States. They're experienced in anime titles such as BlazBlue Central Fiction and Dragon Ball FighterZ.

Nakkiel used to be a part of Panda (formerly Panda Global) from 2018 to 2020, but they parted ways in August 2020 due to troubling allegations against the player.