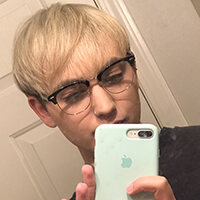 Liam is a competitive fighting games player from North America.

Liam first appeared at pro stage at EVO 2017 playing BlazBlue: Central Fiction and Guilty Gear Xrd REV2. The list of his disciplines is quite volumetric as he played Street Fighter V, Tekken 7, Under Night In-Birth Exe:Late[st], Dragon Ball FighterZ, and Super Smash Bros Ultimate throughout his career. The list of visited tournaments is also impressive as it includes EVO 2017-2019, Frosty Faustings 2018-2020, Combo Breaker 2019, and lots of other minor local and regional events.