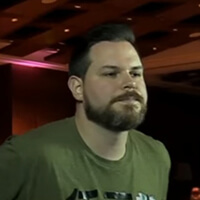 Jamie "ieatbamboo" Smith is a competitive Tekken and Mortal Kombat 11 player from the United States of America.

He's been playing Tekken series for a long time and appeared on the scene at The Fall Classic 2017, where he became 25th of 133 participants. Ieatbamboo attended numerous local and international tournaments since then, like Kumite in Tennessee three times in a row since 2018.