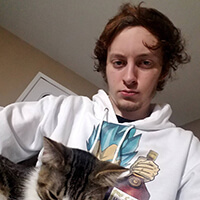 Hell Yeah started his career as a Guilty Gear and Blazblue player with appearing at Kumite in Tennessee 2017 and Frosty Faustings IX. There were also a bunch of local events and tournaments throughout the years where he appeared and competed in different disciplines like Tekken 7, Dragon Ball FighterZ, The King of Fighters and Samurai Shodown. At Kumite in Tennessee 2020, he made it to top-35 as a Tekken 7 player.