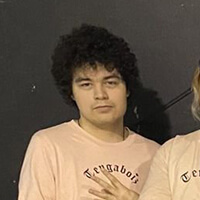 GhostChips considered one of the strongest Street Fighter V players in the region. Check out his Twitch channel to watch him play.