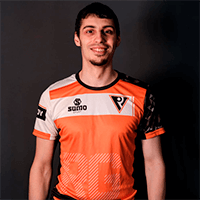 Gamba is mostly known for their Dragon Ball FighterZ display but also experienced in Guilty Gear and Street Fighter titles.