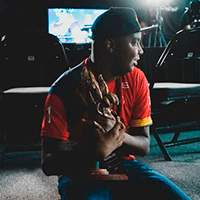 In DBFZ, Doza attended a lot of tournaments and reached pretty high placings in some of them. In 2018 they placed 7th at Texas Showdown and Combo Breaker, and also reached 13th place at Community Effort Orlando. They also appeared at Evo 2018 and CEOtaku 2018. Doza also took part in Frosty Faustings XI, Final Round, South Louisiana Major (1st place), Texas Showdown, Combo Breaker, and CEO. They also won Kumite in Texas 2019, appeared at Frosty Faustings XII, Evo 2019, AnimEVO 2019, and CEOtaky 2019.

Doza also started to play Guilty Gear Strive since the game release in 2021.