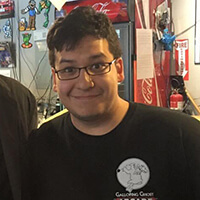 Eduardo "Banchito" Perez is a fighting games competitor from the United States.