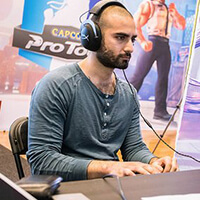 Atrosh also represented some well known esport organizations back in the day, such as FNATIC and Epsilon Esports.