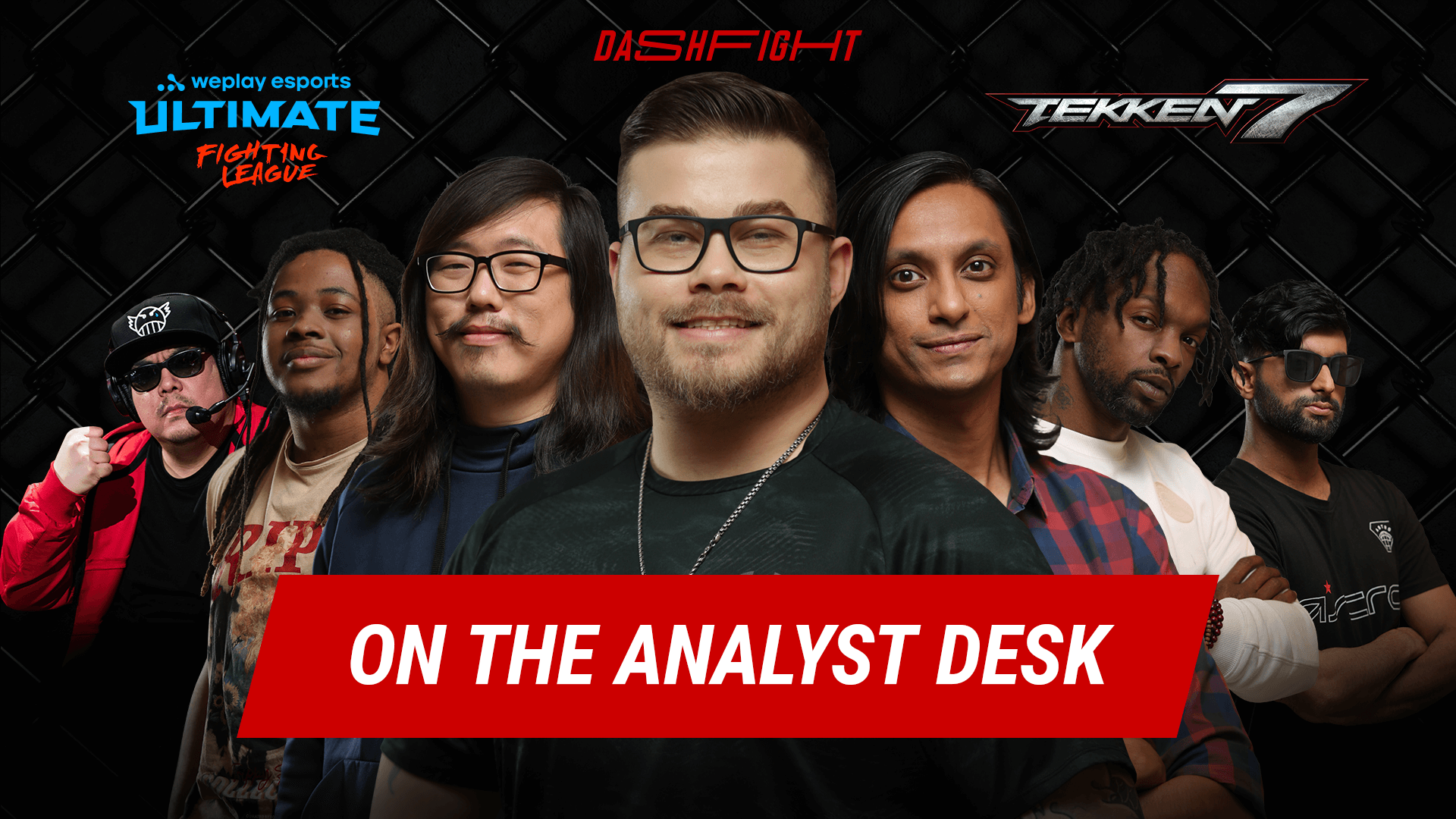 WePlay Ultimate Fighting League Season 1 crowned its Tekken 7 champion earlier this month. It was none other than Arslan Ash, who was practically untouchable during the tournament. After the event was over, we reached out to the Tekken 7 commentators and analysts and asked them to provide some post-tournament thoughts.

One of the most critical points of view for any tournament is the feedback from the broadcast talent. When asked about their general impressions of the event, they had the following to say:

Spag: I haven't personally experienced production quality and hospitality as they were at WUFL. It was an amazing experience and a great vibe for the players and talent. Even though I wasn't well, I felt so safe because of the love and care I was shown by the staff. I'll never forget it.

K-Wiss: My general impressions of WUFL: Awe-inspiring. When I first saw the stage and all the production, I was blown away.

Rip: WUFL was such a wonderful event! Top tier production, fantastic stage and venue, and of course amazing Tekken matches from some of the best players from around the world.

Tasty Steve: Great event in both production and staff. 11/10 would do it again.

MYK: Some of the highest production value for FGC tournament content with top-level talent and players. Also, the graphic and video editors were top-notch as well.

MarkMan: I had a great time both being part of WePlay's Ultimate Fighting League event as part of the broadcast talent and as a fan of fighting games. The most important thing was the focus on the players. Learning their stories, their difficulties in keeping interest during the pandemic, and seeing them shine through adversity.

James Banks: Being heavily involved in it from the very start and knowing what the team did for the Dragon Temple, I honestly thought it wouldn't be possible to beat that. Then when I first came to the arena, saw the design, saw the setup, and all the things the players and talent were provided with, I was once again left gobsmacked. This was a great first season and something everyone involved can be very proud of.

WUFL didn’t lack in the “Good-ass Tekken” department, as hype matches started happening  from Day 1 of the Groups. We couldn’t choose our favorite match, so, naturally, we asked the talents to do so.

Spag: My favorite match was Caiper vs. Danielmado. It was an elimination match that was back and forth and went down to the wire. Both guys trained hard internationally, so the storyline was interesting.

K-Wiss: My favorite match was either Daniel Mado vs. Caiper or Fergus vs. Awais Honey. I can’t choose!

Rip: My favorite match was Saint vs. Arslan Ash. Down to the wire, very tense, and it all came down to one mistake from Saint. Would love to see them play again!

MYK: For the story of making it into Top 8 or not: Fergus’ domination over Awais Honey. Perfect little storm of a storyline: Fergus believing in his main. and also Pakistan’s inexperience vs. Asuka.

MarkMan: The match between Saint and Arslan Ash in the group stages was by far my favorite match. Seeing international talents battle, let alone Evo champions and recognized powerhouses, was such a nice change of pace from what we've been used to in the past year, with online tournaments taking precedence. Being able to see people perform and the emotion behind each and every hit was just breathtaking. Seeing how controlled Arslan Ash is and how he continues to dominate is just an amazing story.

James Banks: I worked on all the games, so I can't really give you one favorite match. The grand final match up between Tekken Master and SonicFox was next level for me, to see the Dragon Temple champion take on the legendary SonicFox in that style was huge. Especially as Tekken Master knocked them into the lower bracket the first time around.

For Soul Calibur, it was Linkorz vs Skyll. Linkorz was on a tear, coming from the upper bracket, and then had to go against Skyll, who had looked shaky early on. I think I may be slightly biased on this matchup due to the Kayane hype I had in my ear the entire time!

Lastly, with Tekken, Caiper vs. DanielMado was crazy for me. Myself, Rip, and MYK were losing our minds, it was so close, maybe not the cleanest display of skill from the guys, but you could see how badly they both wanted it.

Everyone involved with WUFL hopes that this event will be beneficial for the growth of the FGC. Especially in the current times of online tournaments forced by COVID. Talents weighed in on what it could mean for the whole community.

Spag: I hope WUFL will show people that the FGC can be a part of big events with amazing production. I hope it will inspire us all to always seek improvement.

K-Wiss: I hope it shows that the FGC can still elevate. It’s cool to also put on a show while providing amazing Tekken action.

Rip: Currently, there are no offline events for the FGC, so the fact that WUFL is making this happen is already incredible. Talking to people backstage, I can tell that WUFL is doing everything to add value to the FGC without overlapping with existing events. That by itself is immense and is the right approach, as it only adds value for FGC players and talent.

Tasty Steve: I think it will have a positive impact, with all the games, the high-level competition, the players within the international invite format. It’s always good.

MYK: WUFL is a positive, very impactful one that pretty much set its own gold standards right outta the gates. High production, great team that kept all the moving pieces and parts going smoothly, big prizes for competitors, and a great viewing experience for the people at home as well. It came at the perfect time with the current world situation and was a banger of a way to start it off. Especially with online qualifiers possibly being a thing in the future, it’ll only help grow the hype for any of the potential killers that might be in the online space.

MarkMan: I think it's safe to say that the community has taken well to the competition and production of the event. It's very easy to see the impact because we currently don't have anything like this – and even prior to COVID, high-stakes exhibitions with player storytelling were never really commonplace. I love to see the players shine and the game grow to new audiences and fans.

James Banks: I hope that it will have a positive impact on the entire scene, from the standpoint of having more eyes on a great community, a different style of event, and a well and truly upgraded experience for all the players and talent. We really want to raise the standards for this level of competition. This doesn't mean it has to become the norm, but these high-level professionals deserve an event like this, as you can see coming from other esports titles. The main thing for me is that we come back and improve each and every season, and that will be seen as we invest more in some of the grassroots tournaments and qualifiers we are putting together for the future.

We truly enjoyed the Tekken 7 tournament, and we hope that the talent crew also did. So we asked them to share some of the most memorable moments from WUFL.

Spag: My most memorable moments of WUFL were just watching the players compete again offline. Also watching my friend of eight years, Fergus, and my student KiraKira make it into top-8. It was very emotional.

K-Wiss: 100% it’s commentating with Tasty Steve for the first time. This is something I’ll never forget.

Rip: My favorite moment outside of the FGC side of things was getting to commentate live boxing! That was such an amazing experience that I never expected to do in my life. Getting to meet Usyk and Lomachenko as well just blew my mind! But overall, it has been over a year since most of us have seen each other in person. To bring us all back together from around the world in an offline setting was the most impactful part of the entire trip for me.

Tasty Steve: Being at the offline. In-person fighting game event with players and friends from all over the world. The staff. And the “mash” game with Rip and that dude that made me think I was right about the M&M. Don’t think I forgot!

MYK: Being able to travel and see old friends and meet all the new ones as well. The ability to be able to feed off the energy of the players and crew during the exciting moments of gameplay. Helps with the whole offline experience, not only the games but being able to just chat with people in person, along with whatever silly antics that pursued. All of this with the inside jokes with the waffles and green apple juice, the pre-show production days, even the makeup and wardrobe. It all was the whole package for me.

MarkMan: My most memorable moment was to meet new faces and see a lot of familiar ones. I felt like crying when I finally saw the guys again in person. It's been so long since we've done this, and I really have to thank WUFL for giving us an opportunity to showcase our game, our players, and our camaraderie again.

James Banks: Nothing can beat every time I watched the players and talent first reach the arena, even if they had already seen it during one of the previous week’s events, when they saw it in person, the reaction was priceless. I would also have to say when I got to commentate the boxing, it was a personal dream of mine to do something outside my comfort zone, and to mix real sports and esports as we did was epic. It felt great to be a part of history.

We hope to see all these amazing people back for the second season of WePlay Ultimate Fighting League.