Why You Deserve To Lose To Grapplers 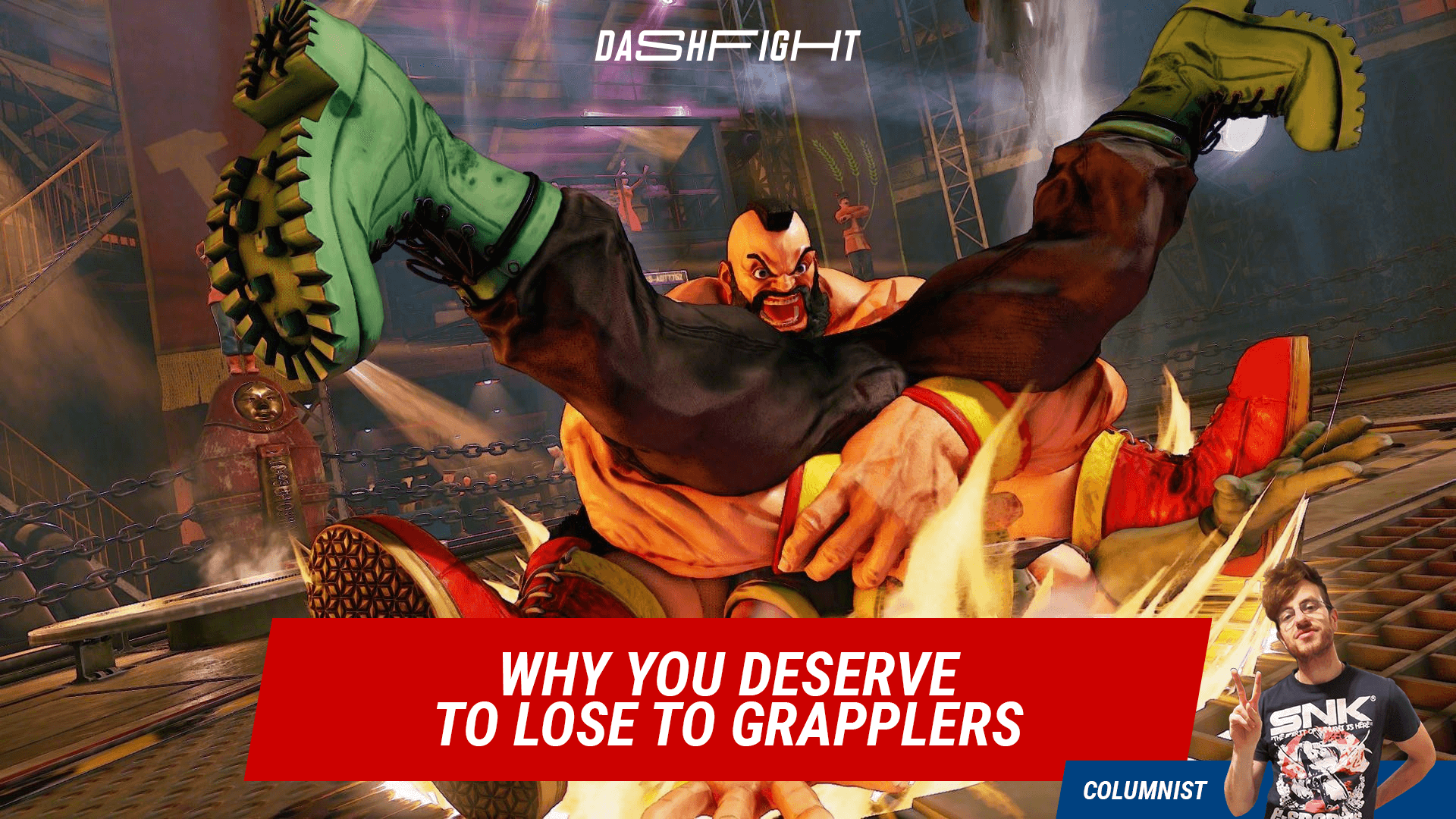 Grapplers are often referred to as gimmicks or cheese in fighting games. But, what if I told you that you deserve to lose to grapplers?

Pure or mixed, chain grabbers, or even regular characters with a single devastating command grab (think Street Fighter 3: The Third Strike’s Makoto) have been terrorizing players around the world since the archetype’s very genesis with Street Fighter 2: The World Warriors in 1991.

Legends and tales among the plebs narrated of unwinnable 10-0 matchups in the early days of lost betas, but when recently the internet tracked it down, it was actually a SNES version.

Regardless, what is true, is that, even at the beginning of the competitive life of Street Fighter 2, especially in Japan, complaints about the supposed overpowered strength of grappler characters (at the time Zangief was the culprit) echoed around Japan, mostly due to a particularly high-level player nicknamed “The Zangief Expert” who would accumulate win streaks and who ended up defining the reasons for the nerfs that would come in future versions, observed at close distance by capcom employees (some would say probably at too close of a distance since said employees returned in shame at their headquarters after receiving several beatings).

According to Yoshiki Okamoto (Producer and developer at Capcom since 1984), this player ended up defining the future of Zangief for a long time and also ended up being branded as the first character specialist in the history of competitive fighting games.

When it comes to putting hands on sticks (or more recently pads, hitbox, mixbox, and steering wheels), what are the reasons so many people end up struggling against grapplers, and why are they largely to blame for their own losses?

Adapting to different rules and dynamics

The very first rule of playing against a grappler on a pure aptitude level is you cannot play against them in the same way you would play against most of the other archetypes or even run your own regular gameplan.

If we define grapplers, for the most part, they are slow and clunky characters with large normals (and hurtboxes) that often have to be played painstakingly to enforce their frame advantage and put the opponent in a position to guess.

This process is often made hard to achieve due to the speed their normals come out in, often glaring weaknesses in terms of stubby ranges, absent or reduced movement options, and exploitable normals, for example, duckable, easily jumpable, or carrying extended recovery.

Taking a patient and precise approach with a good portion of matchup knowledge will force the grappler player in a position of having to rely on their patience and on the opponent’s mistakes so that they can punish pretty hard.

Many players that don’t understand these dynamics will point at the horrible positions they can be put in by grapplers but fail to acknowledge the nuances (or incredible mistakes) that led them there.

Lord Knight explains this very well by mentioning how Strive players vs Potemkin will mistake the amount of limited damage they will eat from a Pot’s 2D as negligible and will fail to understand that said 2D will lead them into a true 50/50, which, depending on resources, may lead to another one and to being cornered with a sliver of life left. 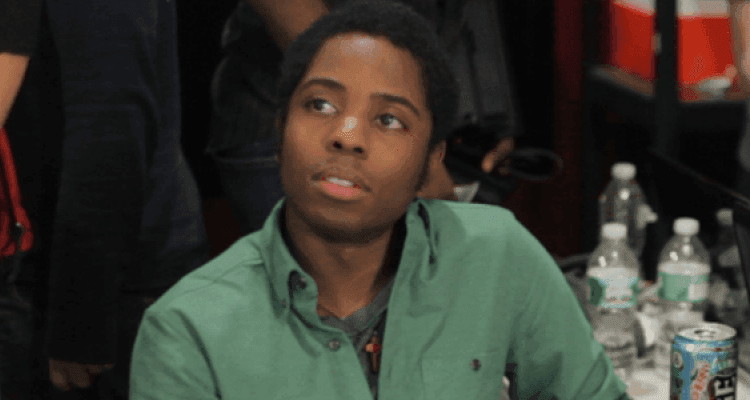 Pair this with the cries for nerfs, the rise of people allergic to training mode, and a “meme” culture that tends to oversimplify information (often to farm engagement), and you have the perfect recipe for spinning, pile-driving disaster.

Staying on Strive, I like to cite a common example: Pot’s 6K (The shoulder charge) cancels into Garuda Impact in neutral. This sequence, if blocked in its entirety, will set the opponent at a whopping -19 disadvantage, allowing Potemkin to set them in a 2K, 2D, or Potemkin Buster 50/50. However, there is a significant gap between the 6K and the Garuda Impact that can be universally punished with a full critical counter.

This piece of information is something that can be discovered in less than 2 minutes in training mode but is somehow largely lost aside from upper intermediate to top level.

Misunderstanding risk/reward and leaving full punishes on the table

The classic complaint against grapplers is that, with a few grabs, they can annihilate life bars.
While being true, this complaint comes from a fundamental misunderstanding of the dynamics of fighting games, especially at lower levels. Damage is given way too much importance, especially in relation to aspects that shape a character’s strengths, such as access, risk mitigation, and the ability of the tools of a character to solve problems.

What a lot of players don’t seem to figure out is how their approach to fighting grapplers is fundamentally wrong from fighting them from too far away and giving them free space, instead of limiting it (often due to fear) by standing just outside their reach, to betting too much on frame traps in the offensive phase which lands them in SPD land to not making it count (conversion wise) when the grappler has the wrong read.

On the other hand, grapplers are heavily limited in terms of tools, access, range, speed of buttons, and often need to hold a lot of offense (and keep away) before finding their way in.

What makes grapplers scary, sorry to say, it’s YOUR lack of understanding and dedication in learning how to fight them. Your lack of composure under pressure, your lack of airborne normals to bait command grabs, your lack of fake meatys into backdash baits, your failed full conversions from whiff punishes, and your fear of their gameplan overall.

Now, not to say that ALL grapplers are limited… meet T.Hawk in Super Turbo.

The exception to the rule

Thunder Hawk was considered a pretty bad character. But, relatively recently, Thunder Hawk has risen in the Super Turbo tier lists thanks to an option select allowing him to execute either his spinning pile drive (Typhoon) or his Tomahawk Buster depending on if his opponent is blocking or trying a reversal (that often will be beaten by Tomahawk Buster).

For many characters, this is more or less a checkmate situation (with some notable exceptions). The key to beating T.Hawk is to beat him at neutral and not be knocked down.

Personally, I think that a constant culture of memes and the need to shorten our thoughts and explanations and leave nuances behind are pushing us to have less meaningful conversations and handle archetypes that are complex (and very meta heavy) very simplistically.

Let’s face it; if there’s something everyone can agree on, it’s that grapplers do require an ungodly amount of patience to navigate the screen and to navigate through their opponent’s gameplan. Notoriously (and often), some of the most negatively skewed matchups belong to grapplers, traditionally against full zoners but also when facing balanced characters with great screen control.

Naysayers may argue that once that space is made up, though, they are in control and that a life of hard reads and using their life bar as currency is what they signed up for.

However, the problem is that grapplers need to compromise a lot of their resources to get to that point, and once there, compromise between damage and oki to execute their guesses again.

When that happens, an actual good read will net them less reward than the punish that they will eat if they are wrong.

Couple that with a generally less streamlined way to apply prolonged pressure (which recently is the only way to get consistent amounts of meter) and limited chances to shake off intelligent pressure, and you’ll see that there are many ways to beat grapplers in fighting games.

As provocative as this may sound, by playing the meta and actually learning to play adaptively rather than trying to push your own gameplan regardless of circumstances.

The disproportionate push for spectator-friendly offensive catered games has left new players with the belief that they have to constantly attack, rushdown and play a mixup heavy/lockdown heavy game but struggle at more metacentric aspects such as neutral, matchup knowledge (and hence being able to answer knowledge checks), risk mitigation, using defensive resources effectively, and just plain out actively thinking when engaged in fighting games.

Understanding your opponent’s gameplan, win condition, limits, patterns, habits, and psychology will help you beat grapplers consistently. They have to work really hard to enforce their gameplan, and whenever they aren’t, and you see that twitter clip, don’t mash that share button and complain, analyze the situation on the other side, and wonder how they could have prevented it.

Signed: Someone that has only mained ONE grappler among many games and plays many different archetypes :)

Want to learn how to let go of Grappler’s fear?
Find my coaching profile on Metafy! Read my fighting games takes on: Twitter and come learn how to press buttons on YouTube and Twitch.

Credits: GMCGolcarJack for confirming some info on T.Hawk in ST, Fighters_Gen for the T.Hawk Artwork, LordKnightBB for the insightful video, Mister Yoshiki Okamoto for his interview, TheoryFighter for the video on the Zangief vs. Honda 10-0 matchup, and Pof for the T.Hawk option select video explanation.