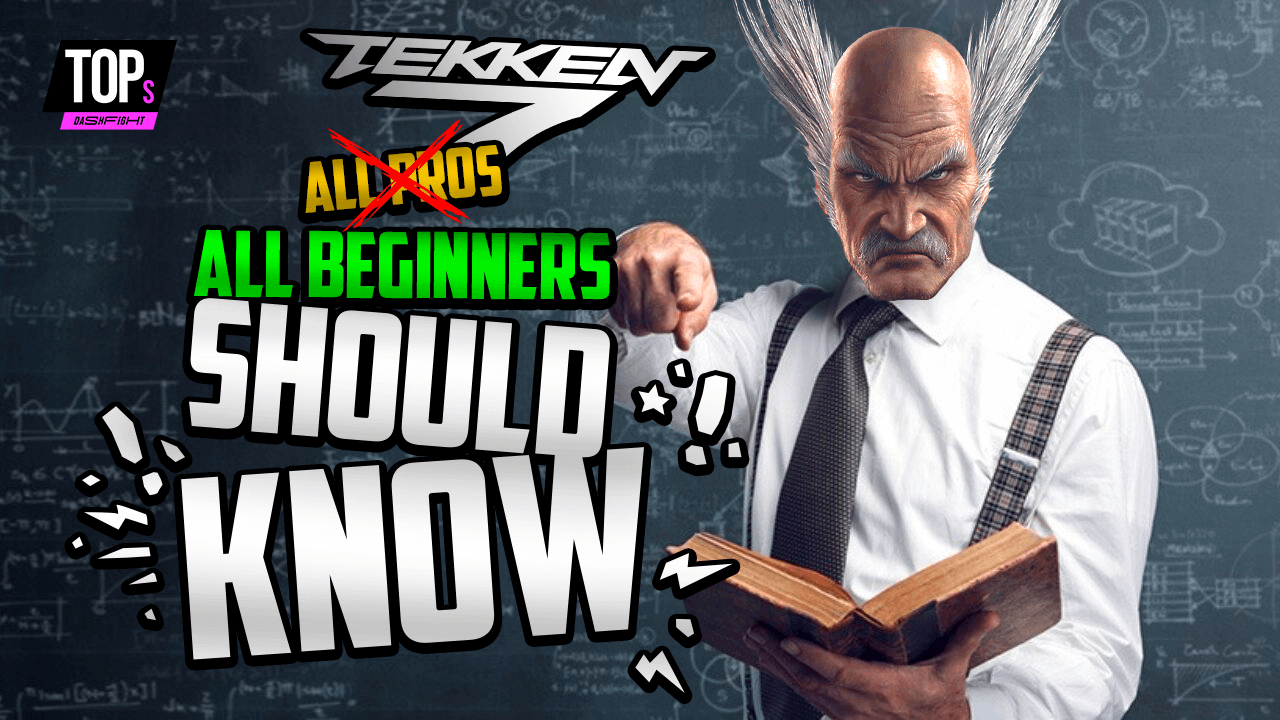 Learn to avoid these pitfalls to become a better player

Tekken 7 is one of the most popular fighting games in the world and a prime example of a great 3D fighting game. It’s also a deep game that can be enjoyed by players of very different skill levels. You can just randomly pick it up and have the time of your life with your mates. You also can get good at it and fight for the prize pools in thousands of dollars at the most prestigious tournaments. But before you do that, you need to pass the initial hurdle most players face – mistakes made as a beginner. Now, you shouldn’t be discouraged if you recognize yourself in some of these. Even the mighty Arslan Ash and Knee were once beginners.

You can watch this article in the video form on the DashFight YouTube channel, or continue reading for the text form.

When you play Tekken 7, you inevitably get knocked down on your bottom several times during the match. How you react in a situation like this is one of the crucial tactical aspects of this game. Many newer players just try to get up as soon as possible because they lack the patience and foresight to make a more informed decision. As a consequence, they get launched and comboed to death. Sometimes, it’s preferable just to lie there a little so that the opponent can’t hit you with what they had in mind. You can do a sideroll, a backroll, maybe even do an unexpected attack. Or maybe it’s indeed good to get up as soon as possible. The main thing here is to assess the situation and act accordingly, and not just get up just as you were knocked down.

One of the coolest looking things you can do in Tekken 7 is to parry a low and smack your opponent down on their bottom. To do this, you need to time d/f with their low strike. This can elevate your game to a new level, but for a relatively new player learning this trick often spells doom. The issue is, they tend to try to parry every opponent low instead of blocking as they should. Yes, this can give you an opportunity to do a good combo, but most of your damaging combos can’t be done from this position. Blocking a strong low and capitalizing on that can often be much more rewarding than just trying to time a parry. And simply put, blocking is just much safer in general.

Now, Tekken has always been a 3D game, which means that you have multiple ways you can move in the arena. Learning how to use the ability to do so to your advantage is one of the most crucial things you can do. But beginners tend to not realize the strength that lies in outright avoiding the attacks. It’s not very important if all you want to do is to have fun with your friends, but if you want to get better, you need to learn when and how to sidestep, backdash, or dash up, because otherwise more experienced opponents will punish you for it.

Everyone who has played fighting games knows that rigorous training is a big part of success. And it’s good if the beginners take this to heart from the get-go. Unfortunately, many of them tend to fall into the pitfall of not labbing properly. Yes, remembering how to do that 10-hit combo is impressive, but simply learning it doesn’t mean you know how and when to use it. More often than not, it’s not even the most optimal combo you can do in many situations. After learning some of the cool strings and long combos, new players then often try to use them in battles no matter what, ignoring much better opportunities to punish their opponents in the process.

Another side of the same medal is underlabbing. And it doesn’t have anything to do with the amount of time you spend in the training mode, it’s about how you spend that time. Look, there’s no denial that labbing is an extremely important aspect of getting better at this game. But you also need to be aware of its limitations. When you learn a combo, you only learn a combo, not the situation to use it. Don’t practice hard, practice smart – the tools at your disposal are pretty advanced, so go ahead and make your AI opponent block and try to open him up, or make him the attacking one and train your blocks or throw breaks. You can simulate a variety of situations, don’t get hung up on combos, and dealing damage.

Playing offline too much

Some of the Tekken newcomers like to play the story mode, then grind out the arcade battles, treasure battles, sit in the lab for hours on end. Then, when feeling ready to take on the world, they go to play online… only to get mercilessly slaughtered and destroyed. Suddenly, none of their beloved combos work, blocks don’t work, sidesteps don’t fool anyone, throws are read, lows are parried… Again, there is nothing wrong with just having fun with the game, playing offline vs. AI, but the CPU opponent will never give you the experience necessary to become a successful online player. Only by battling against the real-life opponent can you truly get better at Tekken 7. One loss against a human can give you more than a thousand wins against a CPU. Don’t be afraid to lose – go online, do your thing, and have fun. You’ll get better in no time.

Rushing down and not blocking

Tekken players often go through this lengthy and weird period where they’re no longer mashing, as they’ve learned some combos, but they’re still not quite sure what they’re supposed to do. One of the most common mistakes during this time is the overreliance on aggression. “I know my combos, and I will make you taste them” is the mindset. Players try to rush the opponents down no matter the character they’re playing, completely ignoring the defense in the process. “Why block when I can beat them before they hit me,” am I right? Wrong! The sooner you will snap out of this phase – the better for your overall growth as a player. Many seasoned players would agree that playing against players like these is easier than facing a true masher: button mashers are completely unreadable, while these players use recognizable combos and patterns that can be instinctively punished. You just need to internalize that blocking is just as important as dishing out the pain.

We at DashFight would love to help you get better – take a look at our comprehensive Tekken 7 Beginner's Guide.