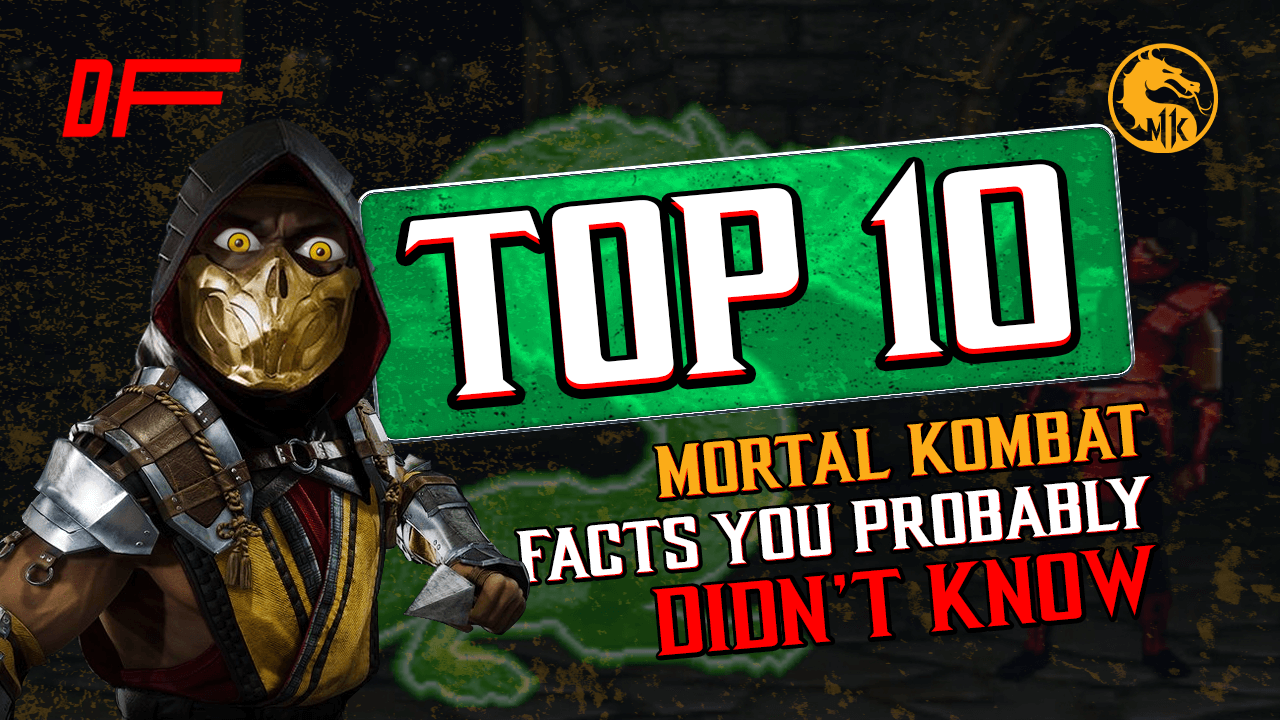 #Video
Here are the facts about your beloved game that you might not know about.

Lists that consist of Mortal Kombat facts are not uncommon, so we’ll try to avoid the most common ones like the origins of Rain and how Noob Saibot’s name is an homage to the creators. In this list, we’ll instead focus on some of the deep cuts and the facts that many people might not have been aware of. The world of Mortal Kombat is fascinating with its easter eggs and deep lore. If you haven’t already, give DashFight a follow for more videos like this and tap the notification bell, so you aren’t left in the dark when we release a new video.

Sub-Zero has been in every single Mortal Kombat game.

So we start off with the fact that there has been a Sub-Zero character in every Mortal Kombat game. There are two characters that have donned the blue ninja suit with siblings Bi-Han and Kuia Liang playing the role of the ice-cold executioner. Sub has not been missing in any Mortal Kombat game, which is remarkable considering that other regulars like Scorpion, who was missing from the original MK3, and Liu Kang, who was missing from the Game Boy version of MK3 and needed to be unlocked in Mortal Kombat: Deception.

We don’t mean the game versions as fire-god Liu Kang is of the faithful ilk. The character of Liu Kang in the first two Mortal Kombat games was played by Ho-Sung Pak, while Kitana was played by Katalin Zamiar, who also happened to play Mileena. The two apparently dated a while during the production of the game. So, we can say that Liu Kang and Kitana’s relationship is truly canon.

Scorpion and Sub-Zero’s actor was changed after he advertised for a rival.

In the first two Mortal Kombat games, the role of Sub-Zero and Scorpion was played by Daniel Pesina. Pesina also did the motion capture for Johnny Cage along with his ninja duties, but he was replaced by John Turk when it was discovered that Pesina had done some promotional work for “BloodStorm,” a game touted as a potential Mortal Kombat killer— it wasn’t. To make matters worse, he did the promotional work while in Johnny Cage costume. This was too much for Midway, and he parted ways with them.

Sonya was not Supposed to be in Mortal Kombat.

While Sonya has gone on to become an inseparable part of Mortal Kombat, she wasn’t originally going to be in the game. Sonya was a last-minute addition in a bid to compete with Street Fighter and ensure that the game wasn’t released without a single female fighter. The plan was for Jax to be the final character of Mortal Kombat with the name ‘Stryker’, and Jax would eventually join the cast in MKII. Sonya was also named after Ed Boon’s sister and was loosely based on Cynthia Rothrock.

Mortal Kombat was meant to be a video game adaptation of the movie Bloodsport.

Jean Claude Van Damme’s Bloodsport was a 1988 movie that was hugely popular, and it certainly caught the attention of Ed Boon and John Tobias. They wanted to base a fighting game off this, but it ultimately failed as Midway wasn’t convinced of the game’s viability. After the insane success of Street Fighter, Midway was onboard with a fighting game with or without Van Damme, and Mortal Kombat was made. Johnny Cage is loosely based on the martial artist, and his infamous split kick groin punch is a callback to a similar move in Bloodsport.

Nowadays, Kano is a trash-talking Australian pirate with a penchant for the disgusting, but that was not the initial plan. In the first game, Kano was developed as a Japanese- American character with an aesthetic inspired by the Terminator films. But, when Trevor Goddard played the role of Kano in the 1995 Mortal Kombat movie, the creators of the game loved his portrayal of Kano as an Aussie so much that they decided that they would go with that persona for the subsequent entries in the game franchise.

Mortal Kombat has a slew of unbelievable characters, Goro with his four arms, and Kintaro was a frigging centaur! Belokk was set to be one of said characters, but we never did get to see him. Belokk was touted to make a debut in MK Gold, but those plans had to be set aside due to time constraints. However, legend has it that he was a secret character in Mortal Kombat Gold due to an anomaly with Tanya's secret character box. But it seems he really was a hoax. Considering the fact that Ermac and Skarlet were also rumored secret characters, we just might get Belokk. Come on, NRS, do it!

The legend of Hornbuckle

Did you ever play on the Pit II stage in Mortal Kombat II and notice a guy who looked a lot like Liu Kang in the background facing another blazing dude? That, my friends, is Hornbuckle. Hornbuckle has never appeared in the MK series as a playable character, but at the time, people went wild wondering if he was a new character. His name was gotten from one of Jade’s hints where she said, ‘Hornbuckle who?’ Canonically he has no name, while incidentally, the person he’s supposedly fighting against called Blaze made his debut as a playable character in Mortal Kombat: Deadly Alliance. In reality, Hornbuckle was simply a palette swap for Liu Kang.

The Unlikely Origins of the Fatality

One of Mortal Kombat’s most enduring and endearing mechanics is Fatality. These game-ending sequences have entertained and shocked fans for decades, but did you know that it was inspired by the ‘dizzy’ from Street Fighter II? What do the dizzy state and fatalities have in common? Well, Ed Boon, co-creator of MK, once said in an interview how he liked the idea of getting a free hit, but hated that it could come in the middle of a game, so instead, they had it at the end of the game. The life-ending attributes of the mechanic were added later.

The dark necromancer, Quan Chi, first appeared in Mortal Kombat Mythologies: Sub-Zero as a secondary antagonist. However, his first appearance in the franchise was in a non-canon animated series called Mortal Kombat: Defenders of the Realm. He appeared in a 1996 episode called ‘The Secret of Quan Chi’ a whole year later before his in-game debut. He was also supposed to appear in the Mortal Kombat Annihilation movie, but that got scrapped, and he has never been seen in an MK movie so far.

So, that’s it, we hope you enjoyed this video and could at least find one fact you didn’t know before now. If you could, give this video a thumbs up and let us know in the comments what other fun MK facts you might have come across. Till next time.