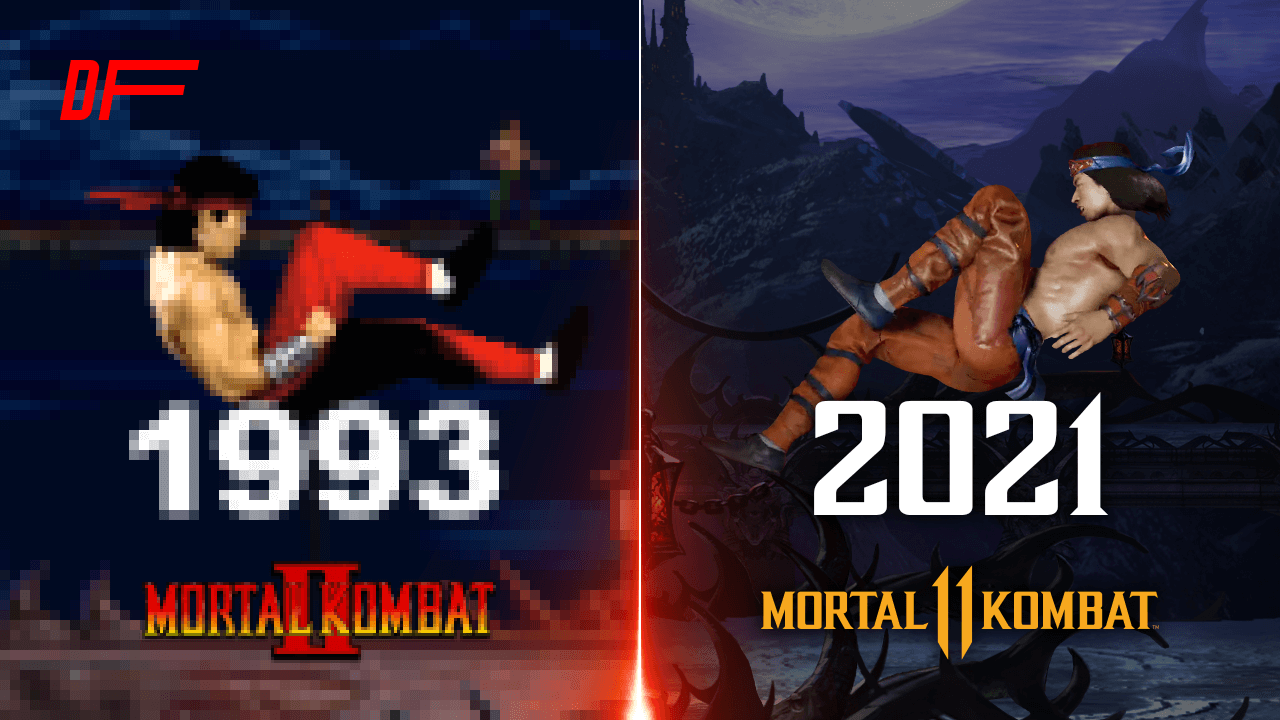 #Video
Can you even imagine Liu Kang without his iconic gravity-defying bicycle kick? We can't!

Mortal Kombat is one of the most popular fighting game series on the planet, and in many ways that’s due to interesting, striking characters. One of the poster children for the franchise is Liu Kang. But can you even imagine him without his iconic gravity-defying bicycle kick? The special move which was introduced in Mortal Kombat II has been an ever-present move in his arsenal. It has undergone a couple of changes over the years, but at heart, it is still the same move that has seen Liu Kang from an ordinary tournament hopeful to a literal god.

Hi everyone, welcome to DashFight’s evolution series. In this video, Sebastian will be checking out the evolution of Liu Kang’s bicycle kick.

As mentioned before, the move was first introduced in Mortal Kombat II as the game’s developers, Midway, sought to expand Liu’s movelist. The bicycle quickly became a favorite amongst players especially due to its easy execution: you simply had to hold down the low kick button for five seconds. In Mortal Kombat II, the move was a great way to pressure your opponents as it dealt decent damage, and had great wall carry potential. In terms of the animation, it featured Liu Kang with his back straight, dishing out a series of rapid-fire kicks in a cycling motion. When Mortal Kombat III came around, the move more or less remained the same especially in the animation department, but there was a slight difference in execution as players only needed to hold down the low kick button for three seconds before the iconic bicycle kick could be performed.

There was Mortal Kombat 4 which saw Liu Kang’s bicycle kick largely remain unchanged except for the fact that it was now with the 3D polygon shapes we were treated to in the early dispensation of the PlayStation era. But let’s take a look at how Liu Kang’s move translated to Mortal Kombat Gold. Here, the 3D aspect of the game was a lot more polished and the move was still a great offensive option for most players. That said, Liu Kang’s positioning for the move did change a bit as his MK Gold variant saw his back bent further making him almost horizontal and the camera always panned to his back as he pulled off the kick. Thankfully, he still kept the legendary yell, thank goodness, where would we be without it?

This was our first introduction to zombie Liu Kang who was missing from the last game, Mortal Kombat: Deadly Alliance. In that game, Liu Kang had been killed. while in Deception, his corpse had been reanimated. Hence, his design saw a few changes as he donned all that great ‘The Walking Dead’ makeup and slapped on chains on his wrists to give off the likeness of a freed prisoner. The bicycle kick remained and this time it features a slight push back at the end of the sequence which propelled the opponent backward and was the force necessary for Liu to regain his footing. Furthermore, the move was made even easier to input as you simply had to do DF3 and you had the move. Most importantly, zombie Liu Kang’s voice box still seems intact as the iconic yell could still be heard distinctly when performing the move.

Liu Kang’s bicycle kick in Shaolin Monks was insane as it had a bit of a sting in the tail. You see, you could pull off the move and add a flying kick at the end which made it a sort of hybrid move. So, in this game, Liu’s bicycle kick packed a wicked punch at the end which pushed the opponent back significantly and provided an opportunity for added pressure. Also, the move was a lot faster than older versions with the kicks flying at almost supersonic speed. It was an absolute beauty.

Zombie Liu made a return in this game and the bicycle kick was in tow. Unfortunately, somewhere between Deception and this game, Liu Kang lost his voice box giving us the first game in which the infamous yell could not be heard while the move was being performed. Also, they removed the flying kick at the end thereby making the move a lot more like its first version. Also, the kick didn’t have as much wall carry potential as it used to. All in all, Liu’s Armageddon Bicycle kick was something of a disappointment.

The best part of this bicycle kick is that the yell is back! That said, it would seem like the standard bicycle kick, but a closer look shows a few changes. In this variation of the bicycle kick, Liu Kang brings his knees a lot closer to his chest while performing the cycling motion. This way, it looks a lot more like a bicycle kick. As an offensive move, it was great and it generally looked like Liu Kang stomping his feet into the opponent’s face repeatedly. This made the MK vs. DC bicycle kick variation one of the most impressive looking to me.

This was the first of the NetherRealm Studios Mortal Kombat games. It was a reboot of the franchise and offered a slightly different tale from what we had been coming from. Fortunately, the bicycle kick remained, but, there were a few changes, most notably, Liu Kang’s stance when pulling off the move. In earlier games, Liu Kang’s posture was horizontal, but with the NRS games, Liu was a lot more diagonal when executing the move and hung higher in the air. While more realistic looking, it did give it a feel of something a stunt performer would do. The move’s input remained the same from the DC game (BBF4) which made it a lot easier to utilize in a fast-paced battle. It wasn’t all good news though as NRS decided to do away with the yell, perhaps they thought it sounded too lame for such a realistic-looking Liu Kang.

Incredibly popular, MKX saw Mortal Kombat surge within the competitive esports scene. It was also the first mainline Mortal Kombat game to fully embrace guest characters with the addition of Leatherface, Jason, and Alien. As for Liu Kang’s bicycle kick, NRS read the room and brought back the yell. But, with the introduction of variations to characters, the bicycle kick became a move locked under the Dragon Fire variation which made the move available to only those who employed that variation. The input was also changed slightly and the angle was also adjusted. Finally, at the end of the sequence, players could choose to add a front flip kick that acted as a decent overhead.

Nowadays, the bicycle kick looks a lot more polished than way back in the early days. In the latest installment, the bicycle kick can now be amplified meaning you can get in more kicks and provide yourself an advantage in the corner. Also, it has a krushing blow attached making it an even deadlier move. The yells remain, which is always great and the diagonal shape of Liu Kang’s body is only slightly adjusted.

With a new Mortal Kombat game hopefully in the works, it would be interesting to see what shape the bicycle kick will take especially considering that old Liu is a god now. But whatever it is, you can be sure that we here at DashFight will keep you in the loop.