The Essentials to Becoming a Tournament Organizer 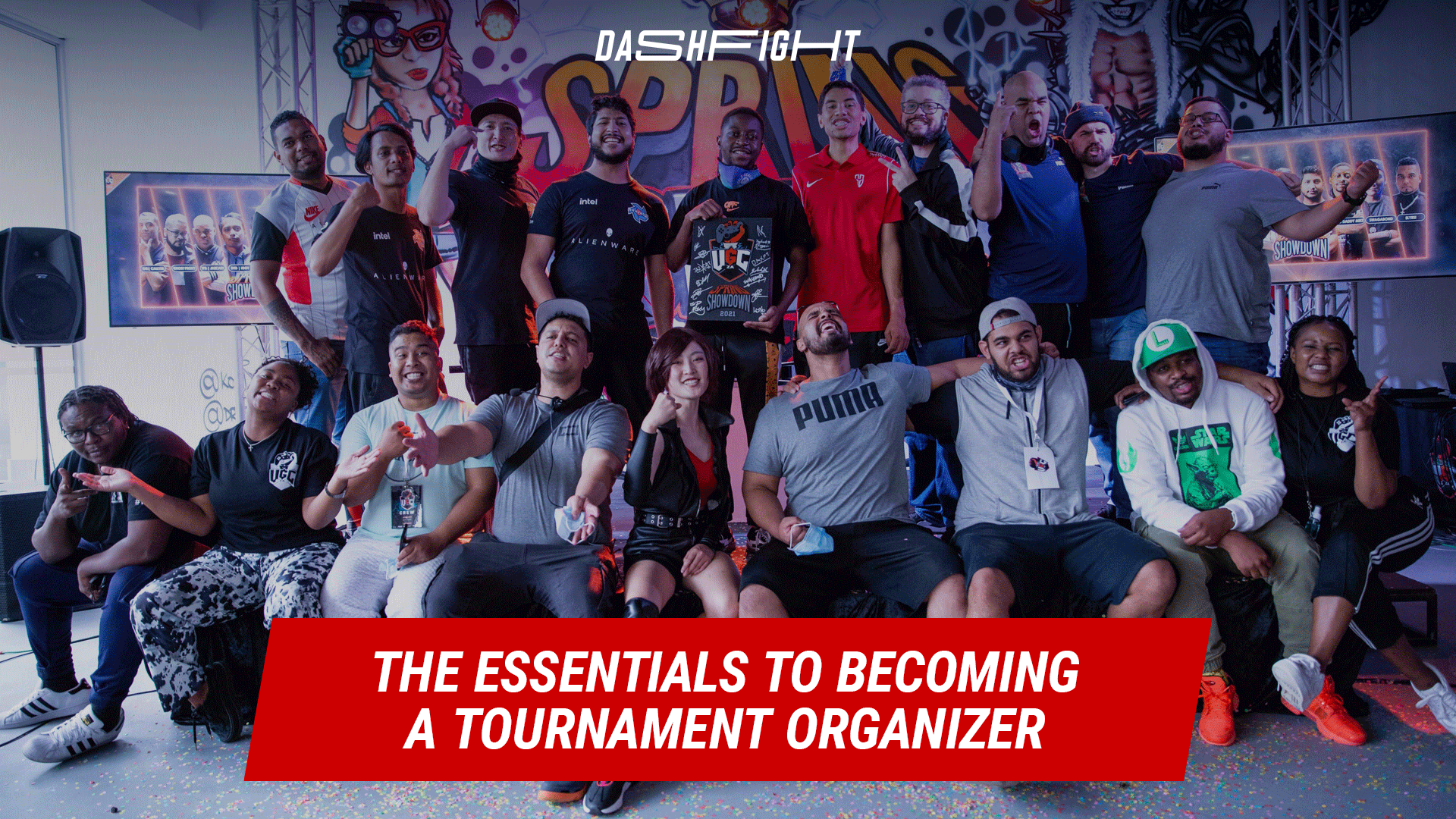 Becoming a tournament organizer is not a cake walk, so we have all the details you need

The thorny path to becoming a tournament organizer is filled with several perils. There is also a prevalent idea that it is impossible to put on an event without having a tonne of money at your disposal to make the tournament happen.

That said, it doesn’t have to be the worst thing in the world and can actually be quite pleasant. Tournament organizers are the heartbeat of the FGC and are well respected for good reason.

The worry about capital and several other issues have stopped people from taking the leap and organizing events or streaming. This is even worse if you are from an African country. Africa, while a lovely place with unlimited potential and great characters, is also beset with many problems that other parts of the world do not have to put up with. Issues such as epileptic power supply, sub-par internet connections, and a society that just doesn’t understand why anyone will want to throw money at organizing a video game tournament or streaming while playing.

To this end, it was only fair that we talked about how to do tournament organization successfully. Sure, we could have spoken to a big-time streamer who would give us tips and tricks that might only work for a certain demographic, but instead, we spoke to the individuals we consider best for the job. To this end, it was quite the honor to speak to the guys from Ultimate Gaming Championships (UGC) from South Africa.

I was able to speak to brothers, business partners, and all-round legends Umar and Junayd Bradlow, who were able to answer all of my burning questions about tournament organization, and some of the best ways for a newbie to begin.

For non-African members of the FGC (and to be honest, a lot of members of the African FGC), the name UGC might be a little new, but this will not be the case for long. The Ultimate Gaming Championships are an esports company based in South Africa focused mostly on fighting games. They have a mission to bring about some of the most hype online and offline tournaments in the continent and in the world. Having them in Africa is amazing for all fighting game fans there as they are meeting a need that many have thought of, but few have been able to implement. Speaking of the Bradlow brothers, they are a dynamic duo that complements each other favorably. Umar has been a stalwart of the media scene for years, and with great experience behind the camera, he was the natural choice to act as the creative director and head of production. On the other side of things, we have Junayd, who is an FGC veteran and an OG in fighting games. Predominantly versed in Tekken, he has multiple awards to his name and is also an animator. This makes him well-placed to deal directly with other members of the FGC and new talent just coming into the scene.

UGC have worked on several projects and have lovely priors like the Red Bull Hit the Streets Tournament and the rAge expo. They organize both online and offline tournaments, including compelling shows like FGC dads and the Spring Showdown.

Their origin story was very humorous as Junayd related how they got started as tournament organizers. Long story short, they got into the TO business because there was no one else doing it right. South Africa has a thriving esports scene, but like in many gaming enclaves around the world, the FGC is sometimes treated as an afterthought. Junayd intimated that there were several tournaments where they went and weren’t treated well at all. There were instances where the prize money wasn’t paid out, and at a point, they just thought to themselves, ‘Okay, this community is amazing, and we want them to be treated fairly.’ This was when UGC was born. Since then, they have been great proponents for the growth of the FGC in South Africa and Africa in general.

Now that we know a bit about this amazing organization, we can start answering your burning questions about organizing and running a tournament.

Q - How do you balance passion for the game and community with the idea of monetary profit?

One of the biggest problems that a tournament organizer can face is the monetary gain you hope to get from your endeavors. While most organizers are passionate about their scene and community, there is also a financial aspect that must be considered. Putting on a good tournament is not cheap, so what do you do? How can you strike the right balance between passion and financial value?

For the Bradlow brothers, there are a few things to consider:

Determine the Size of Your Tournament Beforehand

How big do you want to go? The reality that many people don’t always consider is that there are various kinds of tournaments and each one is almost equally important for the community. For instance, a small local is imperative for the growth of that particular region, and without them can be no real improvement in that region. Fighting game tournaments are split into various tiers with tier 1 tournaments hosting the biggest players from all over the world with a huge cash prize. A great example of this is Capcom Cup which features all the top players and offers a huge cash prize. There are much smaller tournaments like NLBC which is a weekly tournament that has local players. With the pandemic, there are even more regular tournaments online which means that both online and offline players have a chance to hone their skills with the best in their area.

So, if you want to be a tournament organizer, you should first determine what level of tournament you want to have. If you are going for something of the weekly local variety, you can easily sort out your budget and see where that takes you.

If you are looking to go for a bigger-sized tournament, you are sure to incur quite a tab as you’ll need to figure out venue, hospitality, and so much more. You might be tempted to set a ticket price for admittance and hope that you recoup money from that, but Umar says that isn’t the best idea. Instead, what UGC have done and what is recommended is to look for sponsors. If you can tie your event to a few brands, it will go a long way in helping you recoup money. Note that to attract sponsors, you’ll need to have an event with great production value that will have a lot of attention.

What do you have to spend? Once that is determined, let that be a guide for the entire tournament. A lot of tournament organizers want to create something amazing and refuse to cut their coats according to their size. This can only lead to problems. So, if you are looking to organize your tournament, always ensure you spend within what you have and never go higher. Overambition will only lead to other failures such as the inability to pay staff, player pay-outs, and so on.

Q - What is the Most Important Virtue for a Tournament Organizer?

This sounds simple but is an important point. Too many times, a tournament’s protagonist is the tournament which shouldn’t be so. The truth is, players are the most important components of any tournament. For most people, the players are the reason they watch and it is unfortunate that many TOs don’t treat players right. This is a reality all over the world where players are treated roughly, cheated, and considered an afterthought. This spoils the competition and usually doesn’t bode well for the future of that tournament. As a tournament organizer, you should always place the players first and ensure that they are comfortable. This makes it more likely for the players to return and for your tournament to grow in prestige.

Take care of those around you

This is related to the first point. Tournament organization, like with most things in life, is all about people. To be successful at it, you must treat people well. This includes even the ‘least important’ person in your endeavor. Without these qualities, a tournament organizer will most likely go out of business sooner rather than later.

Thanks to the Bradlow brothers, I was able to get such useful information. Moving towards something a bit more personal, I asked about the best tournaments they had ever put together. For the online space, they mentioned the Rage Drive tournament which gave them an opportunity to work with the very best within the South African scene. For offline, they mentioned an offline invitational held in December 2021.

If you’ve gone through all this and still harbor dreams of being a tournament organizer, then that is amazing. For younger folk that want to get into this line of work, you should know that it takes a lot of perseverance and patience. It might not always work out immediately, but if you stick at it, you’ll definitely do a great job.

As a final piece of advice from UGC, it is advisable to ensure that organizing tournaments is not a full-time occupation as it can never get you enough to live by. For this reason, it is imperative that you have passion for the game or genre as this is the only way for you to have the discipline and impetus to keep going at it even at the times in which things get frustrating.

To learn more about the guys at UGC, check out their website, you can also follow them on Twitter, and on YouTube where they pump out amazing content and have a lot of the tournaments they have hosted. If you are curious about the South African FGC, this is a great resource to help you understand the region better.

Hopefully, you are armed with more information to help you become the ultimate tournament organizer.