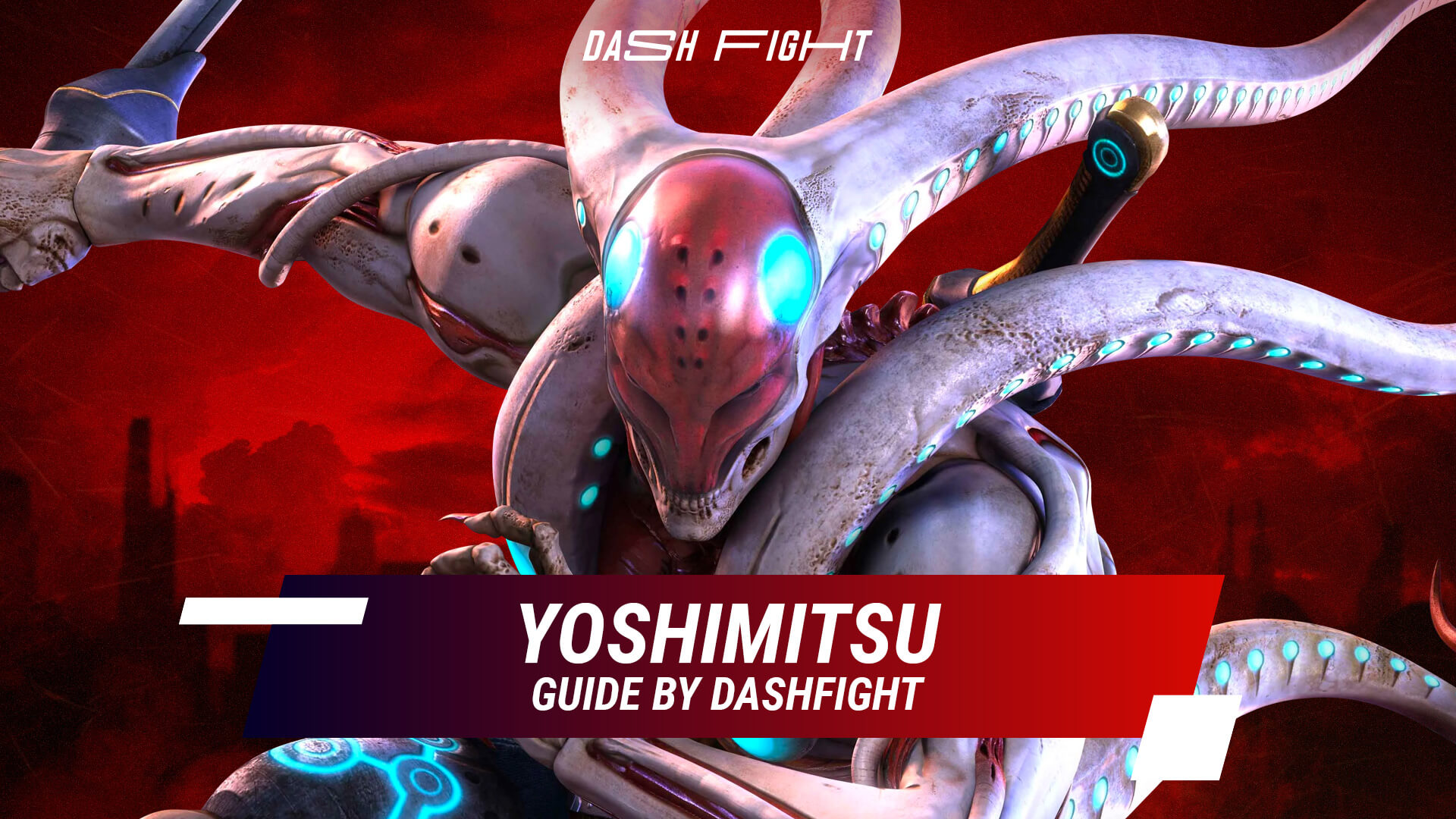 f - Walk towards an Opponent

b - Walk away from an Opponent

b – tap backward once

B – Hold stick back

d – tap down once

U – Hold stick up

+ – Moves must be done together

, – Moves must be done right after the other

~ – Moves must be done IMMEDIATELY after the other

: – Move Following the: has to be precision timed to execute

WS – Do move While standing up

+ - Moves must be done together

, - Moves must be done right after the other

~ - Moves must be done IMMEDIATELY after the other

_ - Or (When used between two moves, they are interchangeable)

> - Move following the > has the option of being slightly delayed

BK - Back facing the opponent

FD/FT - Lying on the ground Face Down / Feet Towards opponent

CH - Major Counterhit (Hitting your opponent during their move execution)

: - Pause 1/3 a second between button presses (Tenstring timings only).

Yoshimitsu is one of the most famous characters all over the Tekken universe. He is a ninja-knight with a sword who can also fight and with his bare hands is quite popular with players. We decided to collect information about his moves and combos in Tekken 7 and to share it with you.

He appears in all sequels and offshoots of the Tekken series. In addition, Yoshimitsu's predecessor with the same name, weapon, clan, and background information was included in yet another fighting game series from Namco as a secret character, debuting in SoulCalibur.

Here is some of the Tekken 7 Yoshimitsu move list. Hope, it will help you as an entire Yoshimitsu Tekken 7 guide.

Yoshi has a lot of stance options. They can be incorporated fluidly in your offense, used as a setup in combos, or transitioned into directly for countless possibilities. I’ll cover how swordless affects stance options in the next section and combo setups in the combo section. This is an important part of the Tekken 7 Yoshimitsu guide.

One of Yoshi’s more useful stances. In addition to the attacks, it also allows you to hold forward to dash continually, or hold down to enter full crouch. It has a large high crush window during each step. The dash can be canceled at any point with an attack option. Entering KIN with 1+2 also doubles as a party, which is active from a roughly 3-9 frame range, and counters almost all mids and highs. Entering this stance with 1+2 and going straight into an attack is fast enough to mask the transition, giving you access to stance moves fairly quickly from a neutral state. The high amount of sword moves from this stance make it tough to parry.

This stance gives phenomenal offensive options so long as your opponent is frozen or at - frames and forced to eat the mixup. You can’t block in this stance but on the flip side, the opponent only ever gets afloat to punish if they catch you. Some Yoshimitsu players just dash up and enter it manually with u1+2 to use its offensive options but that carries risk. You naturally beat lows in this stance (you are flying obviously) but mids and highs will hit you for reduced damage, which makes it a popular choice after dashing up to a grounded opponent for ok since you’ll avoid options and damage + the ground hitting moves. You don’t want to linger in this stance, just do your mixup and get out of it or cancel the stance. You also can’t access this stance is swordless. Transitions to flea and Indian are also possible from here.

Flea is an odd stance. It combines jumping movement with unblockable hitboxes, with a lot of unpredictable elements. It also has evasive options and a fairly straightforward attack mixup.  This can be a difficult stance to assault because any action done in flea (except exiting flea) creates a lingering hitbox on his sword with very little range except for Yoshimitsu’s backside, where it can beat a lot of approach moves. This active hitbox can occasionally knock back an opponent who tries to retaliate or is in range, but this isn’t unblockable like the jump. It lasts briefly after the last move is done, however, Yoshi can’t guard normally while in FLE. Hitting Yoshi in this stance can grant a float combo.

This stance automatically heals Yoshimitsu (3 health per interval) if you simply sit still. He is highly evasive in this stance, beating even certain mids as he falls quickly when using d3+4, which allows for some shenanigans when the opponent whiffs. Holding 3+4 lets you move to the sides and front/back but isn’t very useful outside of being funny. However, tapping a directional input with u or d from Indian gives him a temporarily super evasive window as he stands up. He also transitions to DGF faster than from any other stance with u1+2, which means you can use Indian as a dodge into dragonfly pressure for a strong mixup. Additionally, it can be used as a wakeup pressure stance after ending a wall combo with db33333, d3+4. There are comparatively few moves from this stance. The nice part of this stance is that it is easily accessible with d3+4 from a crouch, without requiring you to stand, further enhancing its evasiveness from certain situations.

This stance also passively heals Yoshimitsu when you sit still, but unlike Indian, it starts by healing 1 health on the first interval, 2 health on the second, and finally 3 health on the third interval and onwards. However, it is still an effective bait to lure people into attacking you. You can turn around with b to create a bit of spacing with this, and if you keep holding back you can hit 3+4 after turning around to go back into MED without having to let go of the back input. You can also cancel MED in a special way to access Yoshi's BT moves. Check the BT section for a breakdown on how to do MED cancels.

Hard to utilize this stance, but it is extremely straightforward. Enter this stance with db1+2 (there is no other way), and hold db (the 1+2 does not need to be held). When you decide on a move you can hit the attack button without release db and it will perform normally. Let go of db to leave the stance. Requires close range to get poison breath to hit. While in this stance, Yoshimitsu crushes all high attacks.

Style of gaming for Yoshimitsu

A swordless mode is a strong tool that can be entered by pressing 2+3 or d22 2+3. It changes the way you can play Yoshimitsu and is not merely an aesthetic difference. It turns him into a more decisive character and streamlines a lot of his oddity in favor of more direct offense. It’s great to switch to for comebacks but is perfectly fine at any time.

Yoshi is one of the characters with advanced back turned (BT) moves, but unlike many of them, he doesn’t have a simple input to go BT instantly. Nor does have the ability to walk around in BT without turning around. However, with some really weird input trickery, Yoshimitsu can access moves while facing the wrong way and effectively play in BT without turning around. Controlling Yoshi with his back turned is an art form of its own.

One of the most dangerous combos for Yoshimitsu in Tekken 7:

Start mastering your skills. Get the latest Yoshimitsu guides!

Thinking sideways with Yoshimitsu is probably more important than with any other character, he is an opportunistic vulture who can steal rounds in countless ways. The more situations you can keep in mind, the more victories you’ll get.

Yoshi can heal at a distance, which can bait opponents into attacking you, which is a great alternative to breaking turtles that other characters don’t possess. The health you gain is fairly minor. In standing MED you heal 1, then 2, then a continuous 3 health per tick, and an immediate 3 health per tick when neutral in Indian (d3+4). However, if you have the time, you can do 1+2 from med for a quick health burst. Hitting ff2, 2 just frame into d3+4 gives a health burst of 4 as well. Healing for extended periods of time is risky, it is more often used for the bait than the health, but it is still handy for both.

On the temple stage, Yoshi can break the floor with a rainbow drop (qcb1+2), for an obscene amount of damage. His generic 2+4 throw also breaks the floor if you need a grab mixup for it. After floor breaks, he can play with charged d1, which is guaranteed on wakeup at certain timings for solid damage, as well as other interesting setups. I hope this knowledge about Yoshimitsu Tekken 7 combos and moves will give you a lot of positive emotions and victories. Good luck with fights!

Yoshi is extremely overwhelming at first. Don’t fall into the trap of doing dumb stuff against an opponent with no respect for you, start by establishing a basic set of parameters. That being said, you can get away with a lot of unsafe stuff at low ranks. His greatest weakness is probably his unsafe offense, but this won’t matter at all before later ranks. Full Yoshimitsu Conceptual Guide for pro players can be checked here.

P.S. We hope that the famous Yoshimitsu helicopter strike will be added to the list of Tekken Yoshimitsu combos on the next part of the game.

Also, we published some guides about Cammy White and Chun-Li from Street Fighter.

Start mastering your skills. Get the latest Yoshimitsu guides!