Tekken 7: The Most Diverse Fighting Game In the World? 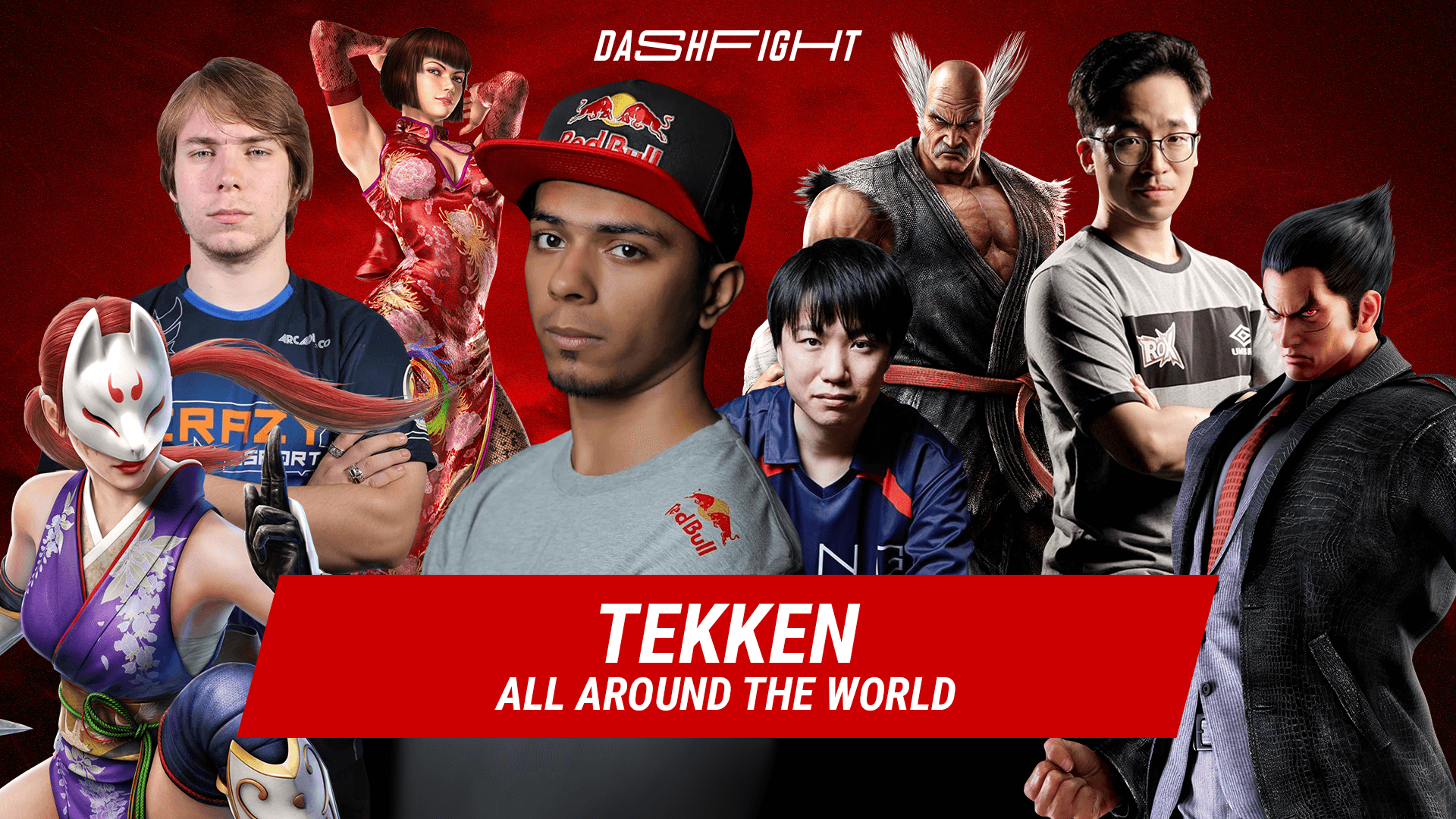 When you think of fighting games and how they are played around the world, there is a feeling that one or two regions ‘own’ a game. For instance, Street Fighter has long been a franchise that North America and Japan have dominated as these two regions have won most of the competitions involving SF. In fact, it wasn’t until Infliltration’s win in 2012’s Evo (Evo has been around since 2002) for Street Fighter IV that someone outside of the United States and Japan won a Street Fighter Evo title. 2012’s impressive win was followed up by an equally remarkable victory for Xian in 2013. What followed was a more diverse development for Street Fighter.

Another example is Soulcalibur which hasn’t seen a lot of representation in the biggest competitions but has long been the domain of the United States and France. Mortal Kombat (basically all NRS games) seems to be the sole purview of the United States, and so on.

So, it has always been the impression that there has never been a genuinely global fighting game that felt like everyone could equally own it.

Since its debut in 2015, Tekken 7 has only grown in popularity, becoming one of the world’s biggest titles at that time. Also, in the esports scene, it has gained more fans, with more and more people tuning in for matches with pleasing regularity.

To be fair, South Korea seems to really have a handle on Tekken 7, but as we have learned in recent years, there are so many other scenes playing Tekken 7 at the highest level, and considering the condition of some areas of the world, there are probably some undiscovered regions. Arslan Ash shocked the world with his total domination in 2019, and we have also seen Filipino, French, Spanish, and Thai players make it to the top of Tekken, making it feel like a truly global game. With Tekken, everyone has a seat at the table, and that balance has started to tilt Tekken towards the top of the fighting game hill.

To clarify this point, a quick glance at the sales figures shows just how popular Tekken 7 is. As of 2020, the martial arts title had sold six million units which are over a million more than Street Fighter V, which around the same time sold about four and a half million copies.

Why does it have such universal appeal? Why are Tekken 7’s characters so popular? Why does it feel like everyone in the world can play it? These are some of the questions we’ll seek to answer in this piece.

Tekken has been around for A LONG time. The first iteration of the game came out in 1994, right at the point where fighting games were building a head of steam. Not only did it showcase some pretty excellent graphics for the time, but it also introduced 3D simulation to the mainstream. Strictly speaking, Virtua Fighter was the first 3D fighting game, but Tekken was so popular (it was the first fighting game to sell over one million copies) that many believe that Tekken was the first 3D fighter. This way, it felt a lot more realistic than many of the games available at the time.

Not only that, but the fighting mechanics of Tekken mirrored real-world martial arts, which just added to the feeling of realism. Games like Street Fighter and Mortal Kombat featured fireballs and impossible feats by characters they claimed were humans. This might have worked for regions like North America and East Asia, where anime and comic books were already pretty popular. So the idea of a human being throwing out a fireball or defying gravity was pretty standard for them. But how about regions where this would have been considered ridiculous? Tekken brought the art of fighting to a base level that Tekken players worldwide could understand, which helped keep it grounded in reality, which undoubtedly played a role in its universal appeal.

Understandably, many have talked about Tekken being a challenging game to master, and they are correct as there are hundreds of moves to learn and such a variety of combos that it could make your head spin. But, there is also immense satisfaction when you land a combo as you know it’s probably something you could pull off in real life (if you have the martial arts skills for it, that is).

So, this is purely speculation, but it does seem that Tekken (or Bandai Namco) is a lot more friendly with their player base. Capcom is such a massive company that it feels like they don’t always have time to cater to their fans. Let’s take a look at the contrasting releases of Street Fighter V and Tekken 7. For the former, no one will forget the absolute fiasco that was SFV’s release. What we got was barely a game. There were almost no characters, no arcade mode, and a heavy emphasis on tournament play. Fans aren’t stupid; we know that game publishers are out to make money first and foremost, but no one likes being made to feel that they only matter because of their money, and members of the FGC are the same. Everything of note on SFV seemed to be behind a paywall, which upset many fans, with many even dropping the game altogether. What more, the netplay sucked, and even when someone tried to do them a favor, Capcom was less than gracious about it. These are all things that have rubbed fans the wrong way and have made them less than trusting of Capcom. The company has since improved SFV, and as of today, the game feels as robust as anyone could hope for with a roadmap to more releases that has fans excited, but the damage has already been done.

In contrast, Tekken 7 released to a much better reception as it seemed that everything the game needed was put in place pretty early, and fans were privy to the full game from the get-go. To be fair, Tekken 7 also had its netcode related problems, but fans were a lot more willing to forgive, and their latest update to fix it has been well received.

Okay, let’s face it, you will never get a storyline on the level of The Last of Us or Red Dead Redemption from a fighting game. They just aren’t built that way. However, as far as fighting game storylines go, Tekken has one of the best. Tekken’s story revolves around the Mishima family. Heihachi Mishima is a tyrant who, when his son, Kazuya, was only five years old, threw him into a ravine believing he was too weak to inherit his conglomerate. Kazuya survived and vowed to exact revenge on his father. But to do so, he would have to enter the King of the Iron Fist tournament. There are several sub-plots, and some of them get a little silly sometimes, but which spellbinding soap opera doesn’t have its fair share of nonsensical stories? The main point is that the Tekken story is one that, while crazy sometimes, is one that its audience has accepted with their heart and are invested in. Therefore, the game doesn’t even try to carry people along anymore, which might suck for a newcomer, but is just fine for veterans of the game. Even the knowledge gap by newcomers is a masterclass in marketing as they are usually compelled to read up on the lore to understand the game fully.

Not only is the story rich and entertaining, but it is also very respectful to all its characters, both male and female. The women are written to be complex and multi-faceted, and with such an extensive roster of female characters, no one is left out.

Tekken is by no means perfect, and there are a few things that people have had issues with. For instance, while there is a large and colorful cast of female characters, the game has caught some heat for keeping all of them young and supple while the male cast is allowed to age gracefully. This is to the point where the women are given ludicrous storylines to ensure that they stay young. The disappearance of Kunimitsu only to be replaced by a daughter who just happens to be young and beautiful is one example. Another was Nina’s fifteen-year-long cryo-sleep which ensured she kept her youth. Or the addition of the thousand-year-old vampire, Eliza, who still keeps her beauty because... vampire powers. But, all in all, Tekken is still a pretty balanced game. The addition of yet another female character in Lidia Sobieska, who isn’t only an accomplished fighter but also the prime minister of Poland, just shows Tekken’s commitment to having a little something for everyone.

All of the above points make Tekken 7 one of the most popular games in the world. But, the one thing that really gives it an edge over most other fighting games out there and makes it a game that every country in the world can lay claim to is the balance. Sure, Tekken 7 has its own tier lists, but most Tekken players will agree that the game is well balanced when it comes to character selection. Unlike some fighting games that require you to use certain characters to win, in Tekken 7, almost any character can win. It all depends on the player. Rangchu, a South Korean player, even won the Tekken World Tour Finals 2018 with Panda, a very underrated character that many take to be low-tier.

Tekken is made for incredible stories. By its very nature, it enables inspirational stories like that of Arslan Ash. It’s been doing it for years and should continue in that trajectory. We might even get another story at the upcoming WUFL Tekken 7 S1 tournament. I’m excited to watch the most diverse fighting game in the world get its moment in the spotlight once more.

For more longread about your favorite fighting games, keep visiting DashFight, and you can stay up-to-date by following us on Twitter, Facebook, and Discord.