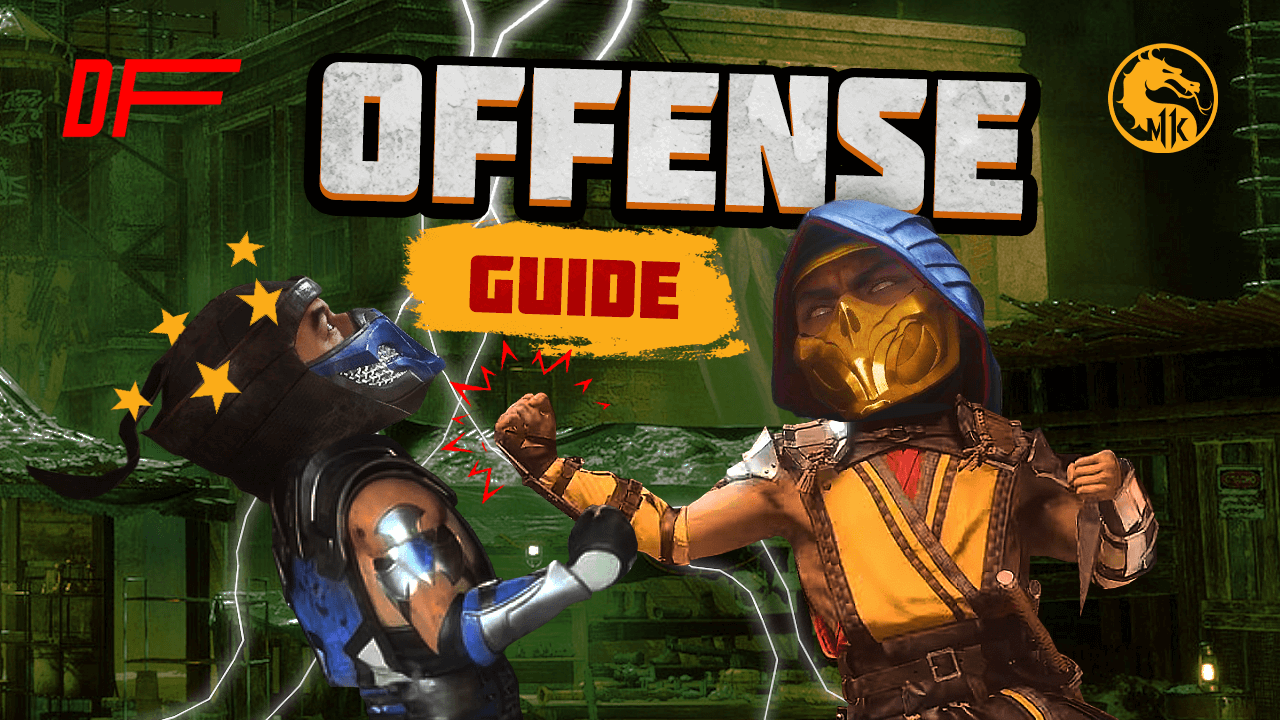 #Guide#Video
If you are struggling with offense in MK11, this is the guide for you

Fighting games are such a nuanced genre, especially when it comes to what makes a good player. When many people get started, they seek to learn special moves and combos that could affect the opponent. But what if your opponent evades your attack? What is the best way to approach an opponent to ensure that you win and they lose? This is where the understanding of offense really comes in. Learning how to open up your opponent and force them to make decisions they do not want are essential tools that every good player must-have. To clearly explain these principles, we have VideoGamezYo, who at this point needs no introduction.

In this guide, we'll learn about the basic rules of offense, how to manage the throw game, and the options available to you that will keep your opponent at a disadvantage.

So, you want to attack your opponent, what do you do? Throw a fireball? They could block that. Rush in guns blazing and hands flying? That could be blocked, evaded, and punished. So, now what? When attacking an opponent, you must be well aware that they will try to stop your approach, and the best way to do this is utilizing block. At any point in time while in a defensive phase, a player will either:

In these states, they will be able to deal with any mid moves you throw at them. However, blocking, while effective, is not without its weaknesses. For an opponent who stand blocks, they are protected against overheads and mids, but they are susceptible to sweeps. Therefore, if an opponent is stand blocking, you can simply use a D4 on them and get a knockdown in the process. Not only that, but you can use a low attack and use it to launch into a combo.

If the opponent chooses to crouch block, they are safe against your sweeps and mids, but they can easily fall victim to an overhead. So, you can use a short hop attack and create a few mix-ups in the process and open up your opponent.

Another approach when dealing with a blocking opponent is to grab them and deal damage in that way. Throws are a crucial part of your offense as they leave your opponent guessing as to which approach you want to employ, and this guessing game can put them at a disadvantage. If an opponent decides to block and is adept in picking when to block high or low as the case demands, you can use a throw as this works on both stand and crouch block.

Nevertheless, you must exercise caution when utilizing throws because the defending player has the choice of neutral ducking. When an opponent simply crouches and doesn't input any other command, your throw will whiff, which could lead to serious damage against you. Therefore, you must keep this in mind when deciding whether to go with a grab or not.

As mentioned earlier, the throw game is a very important aspect of Mortal Kombat 11, but there is more to it than simply crouching to avoid throws and hitting opponents with highs or lows, depending on the situation. There is another aspect of the throw game to consider which will give your opponents trouble, and this is the auto shimmy.

If you have been playing or watching fighting games for any period, you'll have heard of the shimmy. It is a technique where you use movement to bait the other player into pressing a button and then punishing them accordingly. So, if you were to move forward and backward in front of an opponent, they might get the idea that you want to throw them, and they try to tech the throw. This will obviously whiff, and they get opened up to a world of pain.

Auto shimmies are strings that look like throws that could condition the opponent to make a mistake and whiff, leading to punishment. For instance, Sub-Zero has a couple of strings that have a normal first hit and a second hit that could look like a throw and could induce the other player into mashing or teching. Of course, the opponent could block and limit you, but that's the beauty of the mind game. In addition, characters like Sub-Zero, Cassie Cage, and Johnny Cage all have auto-shimmies that are safe and can therefore be used with a lot less risk.

You might have heard the terms risk and reward while watching a tournament or seeing people play. As a concept, it is vital to any fighting game player to consider it when attacking.  Risk and reward refer to the amount of danger you're putting your character in by doing a move versus the gain you obtain if it works out. So, if you try to sweep an opponent while they are crouch blocking, you will get punished. But, if you get the sweep, you'll cause a knockdown and can subsequently pressure your opponent. The risk/reward factor in that scenario is the amount of danger you're putting yourself in by performing the sweep as opposed to the reward you'll get if the sweep works.

In the case of throws, the risk/reward factor favors the defending player because if you try to throw, the defender has the option to D2 and get a krushing blow in the process. This could also lead to more damage if they get the combo right (as much as 30%). On the other hand, if you get the throw, you gain 12% damage on your opponent. Therefore, it is perhaps more beneficial to do something else. But, you need throws to keep the opponent guessing so that you don't become too predictable. This is part of the mind game involved when talking about offense and defense in fighting games.

The next thing to consider is the 'Jump kick option select.' This is a mechanic which allows the player to jump in and input a special move afterward. If the jump connects, then the special move/combo comes out, but if blocked, nothing else happens. This is a rather safe development that has little risk but high reward.

Finally, let's talk movement. Movement is absolutely necessary if you are going to succeed with your offense. Basically, you are expected to move often and ensure you aren't static for too long. In terms of offense, using wave dashes to close the gap between you and an opponent is a required skill for any serious player. The thing with wave dashing is that it is faster, and also somewhat safer than normal movement. In addition, you still retain the ability to block while wave dashing which means that you can close the gap but still repel the attacks of the other player.

The other thing to consider is jumping. Anti-airing isn't very easy in Mortal Kombat 11 which means that you are more likely to get a successful jump-in. Use this tool to start your offense and execute hit-confirms and even if the opposition blocks, you are still safe and can continue mounting pressure.

We hope you have enjoyed this guide. There are a lot more things to consider when attacking an opponent, but this basic guide will help you improve your fundamentals. If you enjoyed this guide, why not check out our Tier List for Mortal Kombat 11. You can also check out our catalog of guides here. And if you like what you see, give us a follow on Twitterand Facebook.