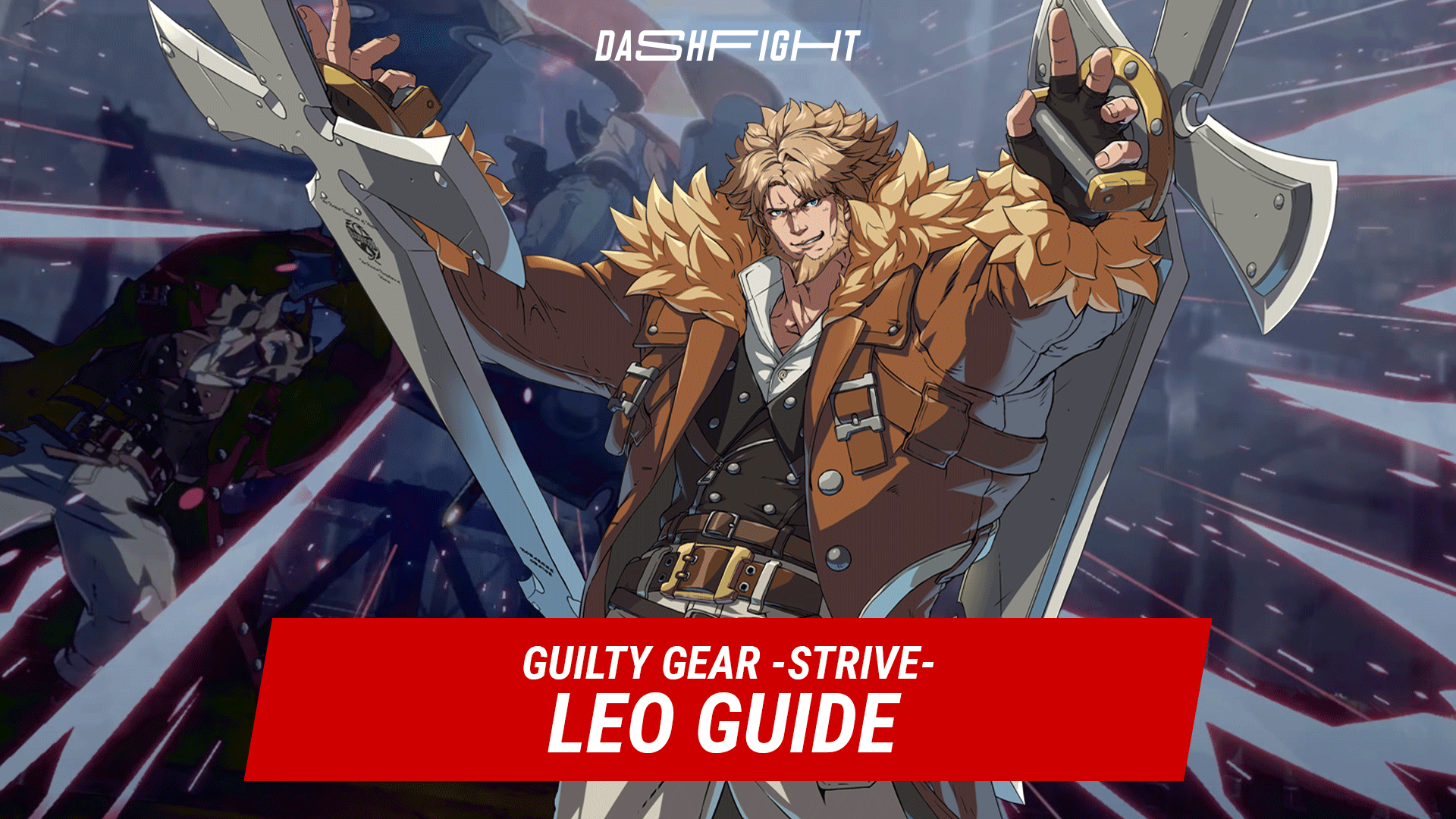 The man with the Brynhildr stance is a versatile monster

Leo Whitefang is the Second King of the United Kingdoms of Illyria and he oversees the well-being of about 20 nations. The arrogant King is a strong character capable of blitzing his opponents to oblivion. He made his way into the public eye when he joined humanity in their war against the gears, and it was here he met Ky Kiske. The two share a rivalry with Leo considering Ky to be the better man, and it is because of this that he changes his behavior to become a lot more personable. He gets his moment in the sun when the ambush on humanity’s last Bastion, the Tasmanian Islands, was quelled by Leo and his forces.

In the STRIVE story, Leo is now a secure King who is called into action again due to the activities of I-No and Happy Chaos.

Boisterous, loud, and intimidating, one might be tempted to consider Leo an uncouth man; however, this isn’t true as he is someone who takes himself seriously and criticizes himself more than anyone else. This is what makes Leo such a great character and leader.

Leo is the definition of a balanced character, and he is a newbie’s dream. He has all the tools to be a top-tier character, including long-reaching attacks, decent damage output, and a command grab. Sure he isn’t the swiftest character you’ll find out there, but he more than makes up for it with his ability to apply the pressure on his opponent.

Leo’s Brynhildr Stance is what characterizes him, and it is a stance that grants access to a fair amount of mix-ups and advantageous situations. On the flip side, it is a stance that requires him to turn his back on the enemy, and this means he is unable to block while in this state.

Furthermore, Leo has a projectile, and his dual wielding empowers him to hit at an enemy with little to no breaks. As mentioned earlier, Leo is a great character to learn the game with but is also viable at higher levels.

Leo is a brawler-like character that looks for a fight and thrives in facing the opponent head-on. Here we’ll look at some of his best buttons.

Brynhildr stance: So, let’s talk about the elephant in the room, the Brynhildr stance. This is a stance in which Leo turns his back on the enemy, and it has some drawbacks. The first is that Leo is unable to block. This seems rather significant as enemies can hit with no problem, and he cannot defend himself. The other problem is that he also cannot jump in this stance. This also takes away his ability to take to the skies to escape pressure or jump in on the opponent. However, he has so many possibilities with the Brynhildr stance. The most significant is that he can switch sides seamlessly without needing to jump. So, Leo can stand in front of an opponent and dash through them to the other side. This creates a problem for other players who might try a DP and whiff, giving Leo the perfect opportunity to counter. Speaking of counters, he has one available to him which acts as a pseudo-shield and can stop anything apart from RCs and Overdrives. In the Brynhildr stance, Leo has an overhead, low, and mid and has some insane pressure potential. He also has a P anti-air which is frankly incredible and will catch just about any sort of jump.

5K: Depending on who you ask, this is either a really good button or a busted button that is quite OP. 5K is a mid and an advancing kick which propels Leo a bit. It is -1 on block and is relatively safe as there are no real situations in which you can be punished for it. 5K also allows you to do a variety of things and is a great combo starter and pressure tool for any Leo user. If an opponent blocks, you can throw them; if you get a counter hit, you can link it into a variety of other buttons to take out a decent chunk of the opponent’s life.

Erstes Kaltes Gestöber (236S): This is another advancing move that Leo has in his arsenal. With his 236S, Leo can hit the opponent froom a good distance and can use this to go into other combos. The most important thing about the 236S is its ability to help Leo get into the opponent’s face, which is where Leo always wants to be. The 236S really shines when paired with a purple Roman Cancel. So, if you do the move and it hits, then immediately do a Purple Roman Cancel; it can lead to a wall of pain. If you can get an optimal combo, you can take the opponent all the way to the wall and even get a wall break leading to an insane amount of damage.

Gravierte Würde ([4]6S/H): This is Leo’s projectile, and due to how the projectile looks, it is commonly called his ‘sonic boom.’ The projectile has an ‘S’ and ‘H’ version. The S version travels about ¾ of the screen and hits twice, making it a surprisingly effective zoning tool if necessary. So, an opponent will have to unleash a powerful projectile of their own to counter it. The H version travels over the entire screen and hits four times, dealing a decent amount of damage to the enemy. The H version is significantly slower than the S version. While Leo can run behind the projectile, he can use a Purple Roman Cancel to his advantage and hit opponents in ways they are sure to hate. It is a great combo ender and a safe way to finish a block string. So, while it is unsafe from up close, you can easily do the [4]6S/H from a little distance and be safe as most people can’t punish at that distance.

Eisensturm ([2]8S/H): This is Leo’s ‘Flashkick.’ It has an ‘S’ and ‘H’ version too. The S version is normal and is one frame faster. The H version adds an additional hit that causes a knockdown. You can then move in to pressure your opponent. While this move has such great offensive pressure, it is not the safest move in the game. For instance, if it is blocked on the ground, it leaves you open to getting hit by the opponent. On the other hand, if you use it as an anti-air, it could work, but conversely, it could be blocked in the air, and you’ll suffer severe punishment if your opponent can utilize it.

Leo is a versatile character with many high points that make him a strong choice for new players or people who love to switch up their playstyles. In this section, we’ll look at the player's pros and cons.

The most significant advantage of Leo, as mentioned above, is his versatility. Leo can utilize any playstyle he wishes with the tools at his disposal. Thanks to his Brynhildr stance, he can be pretty offensive and suffocating. He can deal serious damage with his mix-ups and strike-throw game. However, with the help of his projectile, he can also zone characters and keep them far away and unable to hurt him. So, whatever playstyle you prefer, Leo is able to adapt to it. Speaking of the Brynhildr stance, it is a great tool for pressure and can be absolutely terrifying in the hands of the right player. Sure, you’ll be unable to jump or block, but Leo makes up for it with pressure and damage. He also has a counter tool while in the Brynhildr stance that works as a type of block. Leo has other stances, each with its own use, but the Brynhildr is by far the best. On top of that, Leo possesses an insane flash kick (Eisensturm) which is a great breakout move. It also has a fast startup and causes some damage to the enemy. It’s a great move to use in several situations, and thanks to that, Leo can easily be considered one of the game's better characters.

While Leo doesn’t have any glaring weaknesses, he is not the fastest dude over the ground, and this can lead to a few problems. This means he can be countered with some ease and can be anti-aired with few problems. His dash doesn’t cover a lot of ground which could make it hard for him to get in range against an opponent.

How to Fight Leo

Leo is not the easiest opponent to fight against, but there are ways to deal with him. Due to his all-round nature, Leo can do most things well, but his lack of mobility can be used to his disadvantage. There aren’t many people who have better projectiles, but some do, like Ramlethal, who can use better projectiles. You can also take advantage of his inability to block or jump while in the Brynhildr stance. While his offense is unstoppable, his defense in this stance isn’t great. If you can use his weaknesses, you can take Leo down.

This might be the section of the guide you are most looking forward to. Here we’ll look at some of Leo’s BnB combos. Sure, he has a lot, but here we’ll look to deal with the most doable ones.

You can check out our Leo video guide above, or if you want another character to look at, please have a look at our Guide page.