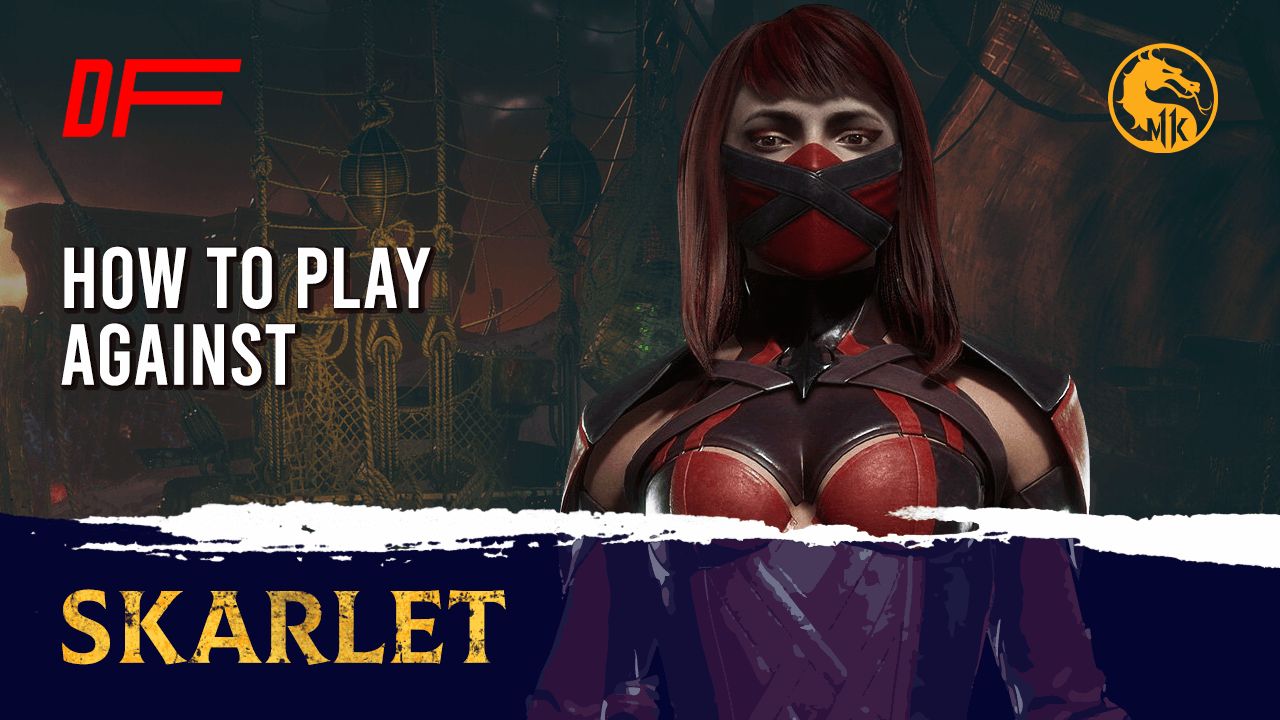 Skarlet made her first appearance in the Mortal Kombat (2011) reboot as a DLC character and returned as a part of the base roster for MK11. She's a crimson-clad mage specializing in blood magic and one of Shao Kahn's adopted daughters. Her playstyle naturally revolved around this ability as Skarlet can manipulate blood in various ways for both defensive and offensive techniques, making her a versatile and formidable opponent.

And who's better for teaching you how to play against this character than MakoraN, a dedicated Skarlet main with the best tournament record of any Skarlet player and roughly 30,000 matches played with the character.

How to Play Against SKARLET guide by [ MakoraN ] | MK11 | DashFight

There isn't that much to talk about when it comes to variations. The ones you will see most often are:

This is a well-rounded selection for every matchup. Skarlet players might also switch to Red Rain for extra damage in some specific situations. The only thing you need to know about the Red Rain variation is that it's very unsafe on block. The only way for Skarlet to use it safely is to either be far away or after hitting you with Boiling Point.

Bloodport is similarly unsafe and can be punished on recovery. However, she might teleport further away to bait you when she has two bars. If you feel Skarlet might do that, make sure not to commit too much. Her Dagger Dance parry is more straightforward. It has 9 frames of start-up and can be punished by either doing a low or jumping attack.

Skarlet is a spacing-oriented character that is very good at zoning and rushdown simultaneously. One of the reasons behind this is her great movement with fast backdashes and high walking speed. She also excels at mid-range thanks to the great range on her buttons, which is an even more significant threat combined with her movement. If you ever whiff buttons against her in neutral, there's a good chance that you will get punished, so keep that in mind.

One of Skarlet's biggest strengths and something unique to her is that she can heal herself from any hit. Combined with the Fatal Blow, it gives her some of the best comeback potentials in the entire game. Just one hit can be enough for her to shift the fight's momentum.

With all of the above, she's a very solid yet underutilized and underexplored character. However, these great benefits come with huge drawbacks.

Skarlet's main weakness is that all of her strings have some form of a gap that can be punished. Every character has a specific punish for her strings, and even if they can't do that, they still take their turn back on block.

Her other major weakness is a lack of fast mids or reversals. Her best reversals are d1 and d3. Outside of that, she only has an i13 mid. This means that she's very vulnerable to double-pokes, but there are ways around that, like walking back and whiff punishing the second poke, flawless blocking the second poke, or doing a reversal grab.

Her third weakness is that she doesn't have great shimmies. The best shimmy she has is f4, but at i13, it's pretty easily duckable. Her 1,2,4 is pretty slow, so it shouldn't catch you trying to tech the throw. If you tech against her wrong, she has a throw Krushing Blow, so keep that in mind. That's why it's usually better to micro-duck her.

Don't breakaway in the corner after Skarlet launches you because she can always meter burn to bf3 AMP and combo you anyway. Combined with Red Rain, it can be very dangerous for you, so keep it in mind.

Skarlet's main two strings that you will see a lot are 1,2,4, and f4,3. Both are -1 unless flawless blocked, and f4,3 becomes -6 on FB. It's essential in the Skarlet matchup as it allows you to go for reversal throws, mids, or pokes. Skarlet players will try to steal their turn back and go for d1 almost every time after this string until you stop them from doing it.

When it comes to 1,2,4, you can flawless block it and go for u2 if it's at least i9 but watch out for the range, as it might whiff if you crouch block the string. This is not an issue with f4,3 as Skarlet ends up right next to you at the end but having an i9 u2 is vital as anything slower is susceptible to the parry.

Her two other strings you will see are 2,1,2 and 4,4. 2,1,2 is an i13 launching high string that is -10 on the last hit. Most players will go for db4 if you block the whole string. Many simply block the tentacle, but there's actually an 11-frame gap that allows you to punish her.

4,4 is a high-mid +6 attack, which usually guarantees a b3 due to the spacing. However, if the opponent knows the matchup, they will know to block high to reduce the knockback. After that, they can backdash and punish the frame-trap attempt. The best Skarlet can do to counter this is a sweep, but that makes her open to jump-in and a full combo punish.

Standing 2 is probably her best button, a long range, neutral on block mid that she can loop with proper spacing. If you try to poke, she can follow up with backdash b3, and if you respect her too much, she can go for a grab or 4,4. However, if she does this move too close, she doesn't have the backdash option and will instead go for the pokes.

After standing 2, f2 is probably her best button but the follow-ups after it are unsafe against certain characters, like Sub-Zero or Shao Kahn, or other characters with a good u2 or u3. Even if your character doesn't have an option to punish it, you will have an opportunity to take your turn back. The f2 into Boiling Point often catches people, but if you pay close attention to her hands, you can react to it.

When you're fighting Skarlet, you generally want to be up close since she doesn't have many good options when right next to the opponent. Because of this, characters like Liu Kang and Jackie can destroy her after getting in.

When it comes to her zoning, you can duck all of it outside of 3 moves: db3, Boiling Point, and Tentacle. If you watch her animation, you can tell when she's doing Blood Ball and duck it instead of blocking it and eating chip damage. Your general approach to her zoning is to walk in and duck her Blood Ball while flawless blocking the other projectiles. Most of them aren't even plus or significantly plus on block, making the approach easier.

Almost every character is a 5:5 matchup for Skarlet, not losing or winning against most characters. The characters who are best against her are:

By far, the best character against her is Sub-Zero. He has a punishment for everything Skarlet has, which makes the matchup closer to 7:3 in his favor. Sliding d4 basically wins the matchup for him, as he doesn't have to use much else. It gets rid of her stagger pressure and punishes her offense.

The only two matchups where Skarlet might have an edge are Rambo and Baraka, but even they can do really well against her.

Skarlet is a very solid character. However, if the opponent knows the matchup perfectly, she does struggle a lot. The game itself works against her because, after pokes, she often wants to go into 4,4 to establish pressure, but due to the flawless block mechanic, all of her jails become fake. Therefore, your core game plan of applying pressure carries significant risk. However, she can circumvent it by going for other options.