How to Play Against Kano Guide with Kombat 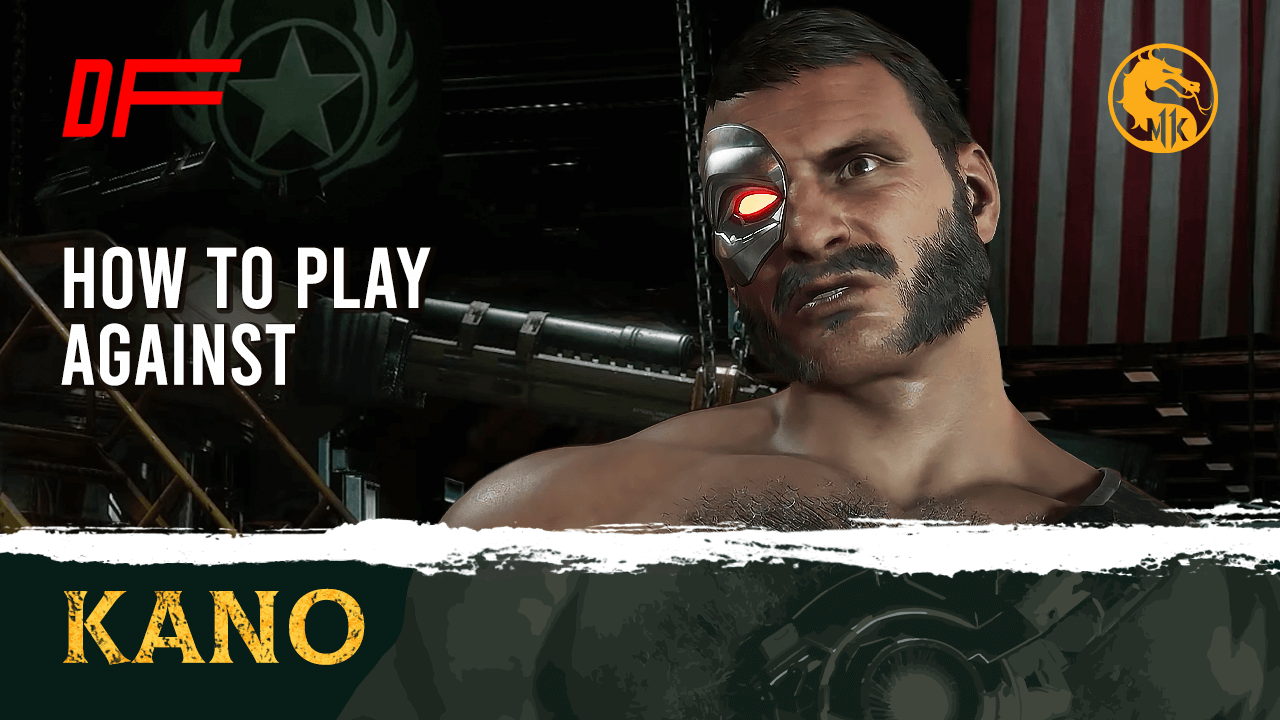 Kano is one of the most annoying characters in MK11 in the right hands, but now we have all you need to ensure he isn't a nuisance anymore

Kano is an insufferable antagonist whose sole aim seems to be to make everyone as miserable as possible. Fascinatingly, this sometimes feels when you have to face Kano online in Mortal Kombat 11. With an interesting toolkit, strong pressure, and even some moves that deal with d.o.t, Kano can be a hassle for even the best players.

So, as we always do, we searched for the very best to help you figure out your game plan against him. Today, our instructor is none other than KombatNY. He's a great Mortal Kombat 11 player who rose to prominence about two years ago. Since then, he has been placing highly in tournaments, and with a new Netherrealm game on the horizon, you can expect to see him around for many years to come.

How to Play Against KANO guide by Kombat

Kano has several moves and strings with which he can harass and bully opponents. If you ever come up against a Kano player, here are some of the stuff you can expect to see:

In terms of a playstyle you can classify Kano as a mix-up/grappler who looks to steamroll you and put you in the corner. His greatest strength is making you guess between a command grab and getting hit with buttons, and this usually works against the opponent. If you are able to stop his unrelenting offense, you'll have a much better chance of defeating Kano.

His main string is his F1, 2 which he uses to harass opponents and keep them locked in. The string is +2 making it useful as a loop string which he can use repeatedly. When paired with his command grab, Kano is really difficult to deal with. There's no Kano that will come into the fray without the command grab as it is pivotal to his playstyle. The command grab is a high which deals 13% damage normally, and 18% if amplified. It also results in oki and is generally an amazing tool.

You can duck the grab, but then he can hit you with a mid and you'll eat a combo and suffer substantial damage. Once Kano has a life lead, he will generally seek to play keep way with the help of his Blade Toss and if he sees an opportunity, he will use his cannonball roll which is punishable if timed right.

With all of that said, Kano does have gaps including his 1, 1, 2 string which can be flawless blocked and punished accordingly.

For Kano, there are two major variations to go for. This doesn't mean you can never use anything else, but they are the two most common and have most of his kit. For certain matchups, you might go for something else, however, what you'll find is that most Kano users load:

Let us now consider how each move works.

Bio-Magnetic Pull: This is a mid that has some range. It works by pulling the opponent closer and then going into a combo. It can be defeated as it is -14 on block and if done close range, or from the max range, you can punish as long as you have the tools to do so.

Chemical Burn: For this move, Kano throws some gasoline on the opponent and sets them on fire. It is usually used as a setup. The way it works is that once Kano gets started on an opponent in the corner with his 1, 1 or 1, 1, 2 string, he can open you up and then he closes things out with a Chemical Burn. At this point, you have to deal with the mind game of trying to guess what he'll do next while also suffering damage over time due to the flames.

Lumbar Check: As mentioned earlier, this is his command grab and it is a must-have for every Kano. It can be ducked or jumped over, but not blocked. It is better to duck as jumping will lead to Kano getting away with his whiff while ducking gives you enough time to react and punish accordingly.

Manhandled: This gives you a couple of new strings and another grab. It aids Kano with his mix-up game making it even more difficult to guess what he is going to do next.

Now that we have looked at some of Kano's strengths and how he likes to fight, we can now look at what you need to do to counter him and take the victory

First off, let's talk about Kano's F1, 2 string. This is generally Kano's go-to string and once you can counter it, you can win the game. Depending on the character you go with, the second hit (2) can be ducked. So, if you block the string it is +2 and he can simply loop it and take advantage of the plus frames. But, you can block the first hit and then duck the second giving you enough time to counter and deal damage. To counter this, Kano players will only do the first hit and then do another low. The first hit is +1 on block and can't be ducked and if they see you ducking, might go for a command grab. So, you'll have to beware and mix up your defense to ensure you are not too predictable.

The best range to play against Kano is between mid or far-range. This means you will look to zone him. However, Kano has a roll that goes under projectiles and can knock you down and he can get in and continue his pressure. This can be dealt with by blocking low. If you block low, just counter with a move that has anything better than a 12f startup and you can punish him with some ease.

What Not to Do Against Kano

There are things you should fish for while playing against Kano and you should look for ways to exploit his weaknesses. But if there is anything you need to absolutely avoid while facing off against Kano is:

Sure he has plus frames for some of his strings and his movement is impeccable, but you must ensure that Kano can't bully you easily as once he can achieve this, he is well on his way to victory. How do you stop him getting away with his shenanigans? Well, one way is to flawless block his F1,2 B2 string. You can flawless block it and punish his plus frames. If you don't have defensive bar, duck the second hit and counter. Some Kano players have an answer to this and will bait out the flawless block and then hit you with a D2, you can play mind games here by ensuring you don't throw out the flawless block everytime.

You can also use a fast D1 to counter once his turn is over. A D1 is a low-risk option that doesn't open you up to much suffering even when it fails.

Kano has a good matchup spread but there are a few characters he struggles against.

This is Kombat's personal go-to against Kano and this has a lot to do with Johnny's projectiles which keep Kano away and also the fact that Johnny can easily duck Kano's F1, 2 string and punish him.

Other characters that Kano struggles against especially since they can duck his F1, 2 string are:

Kano is difficult to deal with, but he's not unbeatable. As long as you can play patiently against him and pick the right character, you should do just fine. If you want more guides, we have them on our dedicate guide page.