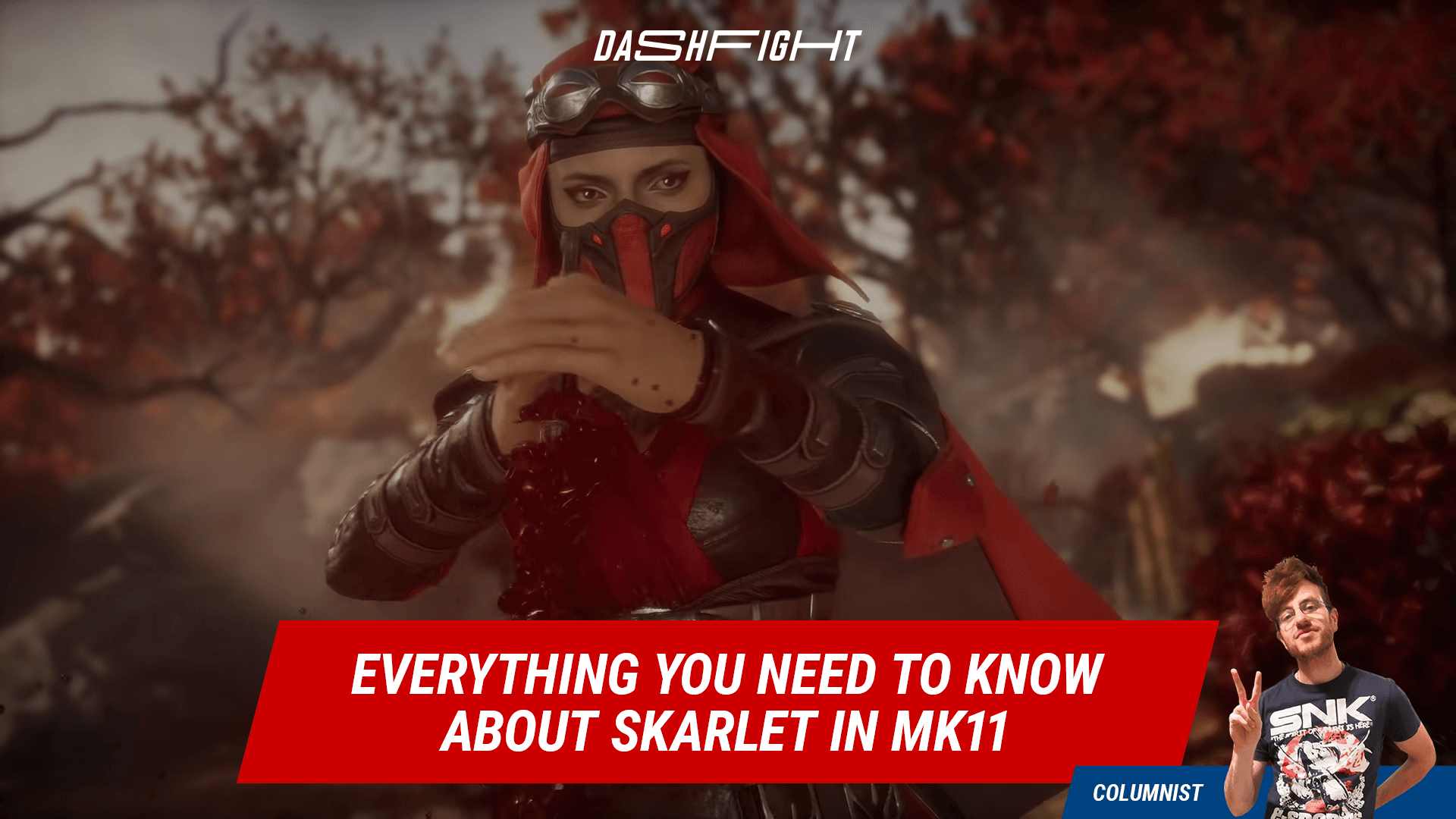 Everything You Need To Know About Skarlet

#Guide
Skarlet is one of the most interesting characters in MK11. This is a definitive guide on everything you need to know about her.

I am Graziano "Gillstolemyride" Fabiano, an active fighting games community member, and I have the pleasure of writing a guide for Skarlet in Mortal Kombat 11 to help you learn the character and compete in the game.

Coming from Outworld's streets as a wretch and taken in by Shao Khan (or created entirely by him depending on which version of the events you like the most) who taught her blood magic, Skarlet is a fierce warrior who utilizes her blood and the blood of others to inflict damage to her opponent and solidify the blood into weapons to use in battle.

Skarlet is one of the few dedicated zoners of Mortal Kombat 11 that is also decent at space control in the mid / long range.

A character that does everything that Skarlet does (minus manipulating blood) but better in the roster would be Cetrion.

She is a fairly challenging character to play, more so due to her shortcomings than execution requirements. She is very easy to approach compared to other high execution characters.

S1: 7 Frames of startup, high poke that can situationally be used as an anti-air and as a punish.

S2: 13 frames of startup, her only button that goes into a launching string midscreen. Decent range.

F2: Her best button for mid-range space control. Startup is 13 and cannot be ducked, has very good range, and can be canceled into parry to cover yourself from mid approaches or confuse your opponent.  It looks like an anti-air, but the upwards hitbox isn't there, don't use it as one.

B4: Slightly more than round start range. This button is excellent for trip jumps at a long distance and as a whiff punish tool (although a bit slow with a 15f startup).

Despite being punishable on block (-12), not a lot of characters can punish due to the range and pushback. Beware of fast horizontally traveling tools like Sub Zero's slide.

F4: 13f startup advancing non-duckable mid, -5 on block, use it to poke and retract to safety on block.

D2: Universal uppercut with universal Krushing Blow, not much to say, easiest anti-air to use.

S4: High, 10 frames startup, can be used comfortably against far anti-airs.  As a grounded button, it allows some punishes that 13f starters cannot punish, as well as providing more range than S1 as a punish button.

D4: Probably Skarlet's best anti air aside from her D2.  A well-timed D4 will make Skarlet low profile a lot of jumpins and allow her to send her opponent fullscreen to restart her zoning.

At 13 frames, fairly slow to time, so get to practice!

B1: By itself, not the greatest button, starts in 19 (very slow) and is usually only used to fish for counter hits into the B1,2 string for the krushing blow.

B2: Very slow overhead, entirely reactable, and -22 on block with no ability to cancel. The Krushing Blow, when landing two of these in a row, doesn't justify its use against good players.

U2: Very stubby range and prone to whiff, both on wakeup and as a flawless block launcher. Only use at very close range.

Her best buttons in neutral are the already mentioned B3, F2, B4, and F4 due to their extended range.

The variation I personally use: It allows for a lot of utility in exchange for raw damage.

With this variation, Skarlet can challenge some Flawless blocks during some of her strings by canceling the string into Dagger Dance (Parry) and Meter Burning to regain some health. Dagger Dance also gives Skarlet a Krushing Blow after three successful parries in a round.

Bloodport allows Skarlet to escape the corner (while she isn't being pressured) and reset her projectile zoning, as well as gain a +9 Okizeme by shortening her 212 juggle.

Her Blood Syphon allows her to pull the opponent close in combos, which is useful against a character with teleports that can easily navigate her zoning and keep her on her toes.

With this variation, you will do considerably more damage but sacrifice some versatility that the siphon gives you (such as pulling opponents close).

Also, it will allow you to have your opponent think about blocking low not to get caught by the boiling point traps.

What does Skarlet excel at:

Skarlet excels at fullscreen projectile space control and zoning and does decent when she is putting pressure on a cornered opponent.

Some of her specials, when meter burned, will give her life back, which gives the character more durability than it would initially look.

She is also supposed to do well in the mid-close range due to her extended range, but frame data, duckability of some of her options, and some tools not working as they look like they would actually put her in a spot where mid-close range could be a danger zone for her.

S1,2,4: Goes into an s1,2 string that can be hit confirmed, -6 on block with some pushback, allowing it to be used as a whiff punish bait against characters with stubby range.

B3,4: A 13f low normal starter that can go into a launching string in the corner and can be option selected. If spaced well, it stays outside of a lot of wakeup U3 ranges while still being able to hit.

S1,2,4: The s1,2 string that can be hit confirmed, - 6 on block if you stop at 1,2 with some pushback, allowing it to be used as a whiff punish bait against characters with stubby range.  On hit, it can cancel into almost everything, allowing you to send the opponent fullscreen for zoning or keep them close while regaining life by meter burning fireballs or cell siphon.

B1,2: This string is good when it hits since it carries an easy Krushing Blow to land, which causes a bleed for 24%. Use it to fish for counter hits and to whiff punish.

Safe on block but very easy to flawless block and with no chance to cancel the string on block.

S2,1,2: goes into s2,1, which is -5 on block with pushback, so it can be used similarly to s1,2 string. Also, your only midscreen launcher aside from D2 Krushing Blow.

Warning, the first S2 is a duckable mid.

B3, 4: A 13f low normal starter that can go into a launching string in the corner and can be option selected. If spaced well stays outside of a lot of wakeup U3 ranges while still being able to hit.

Oh boy, there are a lot, unfortunately.

As mentioned in the previous sections, her weaknesses depend largely on her frame data being pretty bad (slow buttons, punishable stuff, bad frame advantage). Many strings are easily flawless blockable, or interruptable on cancel.

Since her specials also take quite a bit of time to come out, the zoning becomes a risk against a lot of characters aside from when she's fullscreen.

She lacks an easy way to shake off pressure aside from her teleport, but even that can be punished with good reads and reactions.

She struggles to deal with far jump-ins, and 45° degrees angled air fireballs due to the lack of options and limited coverage for that particular area of the screen.

Aside from some situational conversions, her damage is averagely lower than a large part of the cast. Due to her only launcher midscreen being S2, it isn't too common to land significant openers with her. Hence, her damage comes in small bits and pieces.

You can find more guides on DashFight for MK11 characters here: (hyperlink with your guides section)

Read my fighting games takes on: Twitter and come learn how to press buttons on YouTube and Twitch. Hell! If you ask nicely, I will even coach you on Metafy.