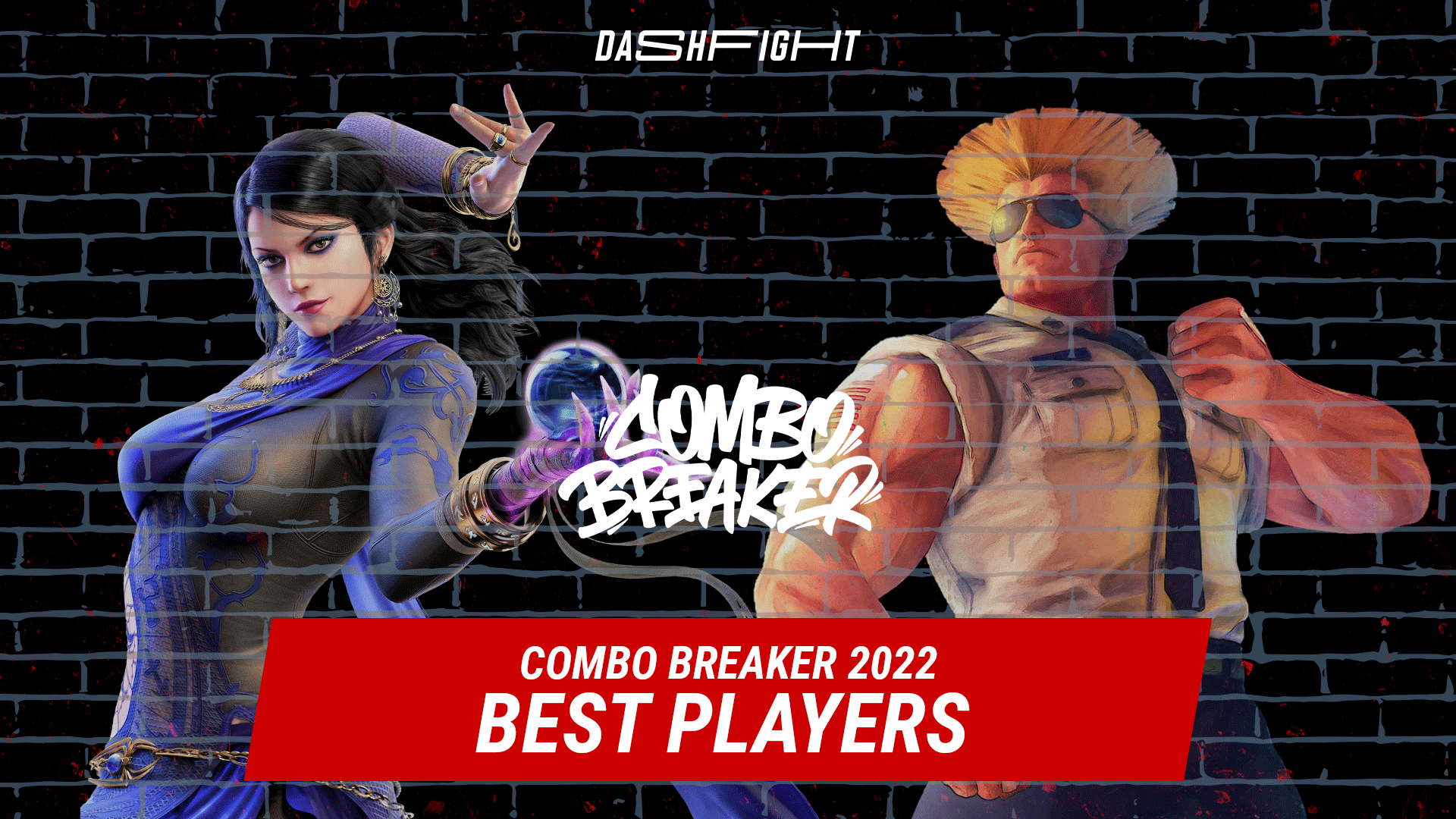 Household names and new arrivals prove their worth at CB2022

Last week, Combo Breaker ended with a bang, and we got some hype memories to cherish until the event's next iteration. As is always the case, we had some clear standout players across the disciplines. Let's take a look at some of the best players at Combo Breaker 2022!

While many deem Arslan Ash to be one of, if not the best Tekken player in the world after his breakout success in 2019, the pandemic made it very difficult for the rising star to continue showing his talents in international offline arenas. However, now that the events are coming back, Arslan shows us that he still has what it takes to be the best.

His Combo Breaker 2022 run is the definition of flawless, with ten straight wins. Arslan didn’t give up even a single match until facing DritonRama in the top 96, a stellar Law player from Germany.

We would get a glimpse of Arslan’s strategy going forward during that set. Whenever he lost a match, he would switch the stage to Infinite Azure to take full advantage of Zafina’s excellent movement. Not only that, but with each passing round, he would better understand his opponent, leading to increasingly more confident matches.

This incredible run culminated with a fittingly dominant grand final where Arslan Ash fought Gen, who recently won in Red Bull Kumite 2021 and is a Tekken legend in his own right. Despite that, Arslan made it a clean 3:0 with only 2 rounds lost across 3 matches, showing us once again that he’s one of the strongest and most consistent Tekken players of all time.

Penpen reached 9th place at Combo Breaker 2017 and already had an Evo 2021 Online - Asia gold medal in Skullgirls under his belt, but this time he came all the way from Japan to a foreign unfriendly ground to show the whole world what lone samurai is capable of. Confidence - this is the word to describe penpen’s performance on Combo Breaker 2022 most accurately. It was not only the gameplay, but the attitude and emotion control. If you’ve watched the stream or being there on the arena, you know how Japanese player reacted to his results. Not a single pop off, not a single muscle moved on his face under the mask. Just pure confidence and focus on the game.

Penpen dominated through the pools, made a single slip in the top 24 stage against Cloud, but continued to climb the bracket like nothing happened, earning one W after another. Just hear that out - penpen took down Triviality, dekillsage, and SonicFox in a single bracket, not to mention his revenge over Cloud in the losers semis. He not just only crushed arguably the most prolific Skullgirls competitive players in the world, but done it in such style to write his name down in fighting game history for sure. Do you remember the last time SonicFox lost six games in a row with absolutely no chance to respond? Yeah, exactly.

Cristopher "Caba" Rodriguez was easily the MVP for Street Fighter V at Combo Breaker 2022. This was evident after his incredible final set with iDom where he reset the bracket and was one round away from winning the entire thing before iDom was able to claim victory. What made Caba’s performance so incredible was his resilience.

You’ll find Caba’s tournament accolades pretty sparse for offline events. He won first place in First Attack last year, and was a regular in Street Figher League, but it always seemed that he was in the shadow of MenaRD, his fellow countryman and close friend. But his performance at CB2022 must have dispelled any myths that he was the deuteragonist in the Mena/Caba relationship. While not taking the top spot, he has certainty caused people to sit up and take notice.

Before top 8, he had already sent Punk, one of the favorites for the tournament, to losers and then, he also lost to Mono PR in the first match in the top 8. He dropped to the losers bracket and from there showed some incredible skill and finesse to make it to grand final. His path included a match against Filipinoman where he beat the Rose player to advance. Then, pitted against another promising young talent in ChrisCCH, he also won before facing Mono once more.

If he was worried that Mono would repeat their set from earlier, it didn’t show and he meticulously closed down all Mono’s options to take the game 3-0. The final against iDom has to be seen to be believed, but he made one of the greatest Street Fighter players bleed. The CB2022 final will be remembered for years to come, and Caba can be proud to take his place in history.

Fighting games, with certain exceptions, do not live forever. And at the end of their lifespans, many pro-players look forward to moving on to the next game in the series or something else entirely. Times like these usually don’t give us massive surprises, and the pro-scene is thinning out.

And it’s as if to challenge this very thought, two Chilean twin-brothers, Nicolas "Nicolas" Martinez and Matias "Scorpionprocs" Martinez stormed the international MK11 scene at the end of last year. Make no mistake, they aren’t some absolute nobodies who just popped up out of nowhere – the South American scene knows them well enough. But last year, they dominated the CEO 2021 bracket, and both made it into the grand final, with Scorpionprocs taking the crown.

They reconfirmed that they’re more than legit at the Combo Breaker 2022 that ended last week. Both brothers won their first top 8 matches with 3:0 sweeps, and then proceeded to showcase their prowess against each other in the winners final. Nicolas won and sent his brother into the losers bracket, but what’s more noteworthy is the twins’ prowess at using an incredibly wide range of characters. This continued in their rematch in the grand final, where they swapped characters around constantly. All in all, in 3 full matches against each other, they both used Geras, Spawn, Liu Kang, Fujin, Kano, Kabal, Kotal Kahn, and Johnny Cage. And they look effortless at utilising the best attributes of these fighters. This is something that the best in the world like Tekken Master are known for, and it seems like we have another top power in the MK community. We couldn’t be more excited about what the Chilean brothers can show us in the future!

This past weekend, Onin took home the prestigious title of being a Combo Breaker 2022 winner. But not far behind him was another SSBU top regional player. Benji “Loaf” Rust, a Minessota native put together an amazing performance that had locals cheering him on even when their own Illinoisans were up on stage against him.

Loaf was playing his main, the ever-popular Wario, and started out great from his pool and top 96 matches right up until his match with Diddy specialist Zinoto, who was the first to take not just a series ut a single map off Loaf’s Wario.

Going through the lower bracket, Loaf would battle it out in 3-2 series versus SamTeaSilver and MVD. Following that he was able to take a clean win versus Ned and a 3-1 victory over WaDi. Of course, come grand finals, he fell to Onin’s Steve.

Not to take anything away from Onin, who looked seriously ready to grab, throw and set up insane angles for spiking Wario off the stage. It will, like most major victories, be discussed and talked about to no end. Whether from the power of the matchup to Steve’s general strategies, or Loaf’s lack of a game plan to counter it. A 3-0 grand final will always lead to controversy. But nothing will take away Loaf’s insane run through the lower bracket to get back up on stage once again and show just how good he is on his Wario.

If you want to see more of Loaf at big events, there is actually something you can do, you can vote him into the Grimvitational! Thanks to his performance in Combo Breaker he has been able to sneak into the voting rounds, and although not a full contender like others on the list, we feel it would be worth highlighting how an excellent CB2022 run deserves another.

Dhalsim Could Be Tokido's New Main

A simple way to save on fighting games